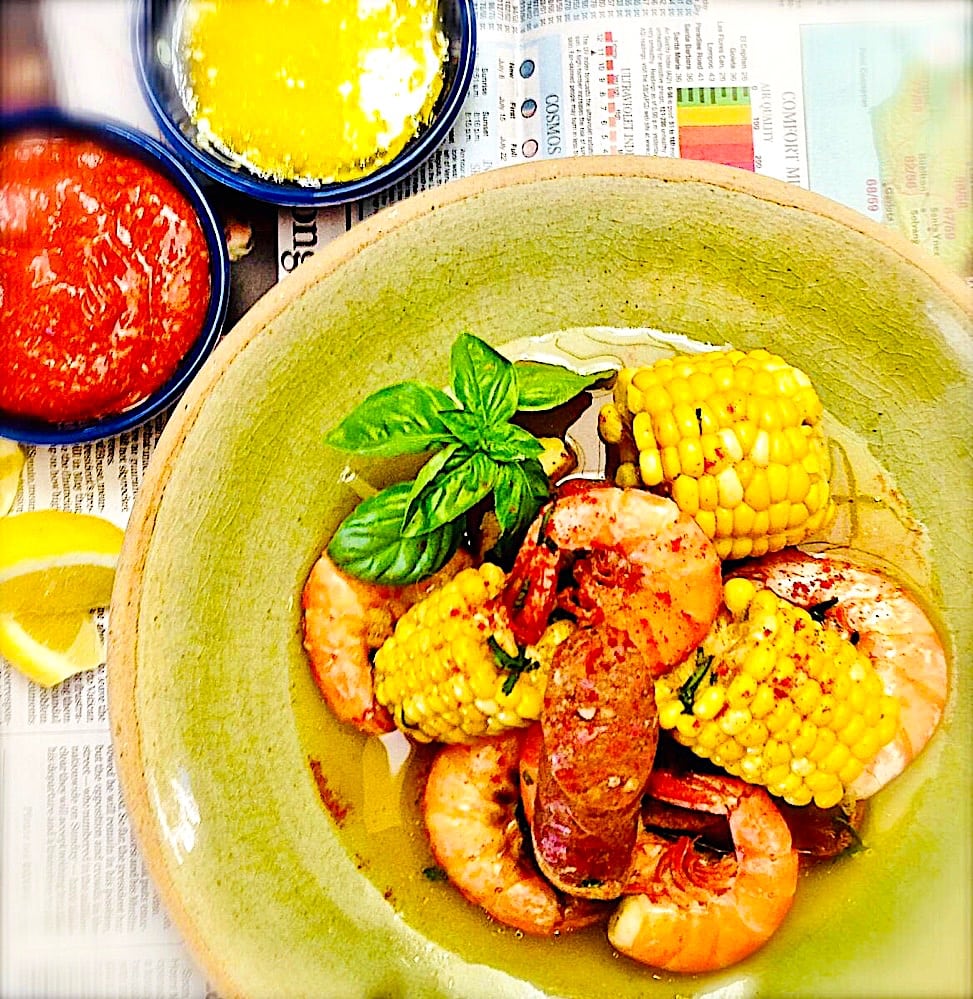 My Citizens, your downhome Leader – the always south of the Mason-Dixon Line TFD! – is a huge fan of all forms of seafood boils. Few, however, can compare with the Lowcountry majestic glory that is Frogmore Stew!

Social gatherings in coastal South Carolina tend to revolve around shellfish. Frogmore Stew is very much like a Louisiana boil, usually involving shrimp, corn on the cob, sausage, and red potatoes, and sometimes ham, and is considered part of Lowcountry cuisine.

Known variously as Frogmore Stew, Beaufort Stew, a Beaufort boil, a Lowcountry boil, or a tidewater boil, they tend to be a bit milder than their Louisiana cousins. For example, it is not unusual for a Lowcountry recipe to call for a mixture of hot and mild boil seasonings, whereas a Louisiana recipe may start with crab boil packets and add large amounts of cayenne pepper.

Frogmore is the name of a community in the middle of St. Helena Island, near Beaufort, South Carolina. Although there are many versions of this dish around, the name Frogmore Stew was coined in the 1960s by Richard Gay, one of the owners of Gay Fish Company, circa 1948, on St. Helena Island.

Frogmore Stew became far better-known after it was featured on the cover of Gourmet Magazine in the 1980s, and is enjoyed by all, with this name, to this day. In 2005, The Travel Channel featured Richard’s brother, Charles Gay, cooking Frogmore Stew in its popular program Taste of America with Mark DeCarlo.

The Low Country Boil may have possible influences from Louisiana, as there are some obvious similarities to some dishes of the cuisine of Louisiana. It showcases the same set of French, Spanish, African and Caribbean influences, including slave trade influences that Louisiana is known for.

Meals for large gatherings of people would have to be made as quickly as possible with readily-available foods. The boil was a quick and easy way to prepare all the foods at once.

The most well attended function to feature Frogmore Stew occurs in July at the 10-day Beaufort Water Festival (in the 54 years of the festival it has grown to be the largest totally volunteer run festival on the south eastern coast), the event feeds 2,400, the recipe includes 1,200 lbs of shrimp, 2,400 ears of corn, 600 lbs of sausage, 72 oz of seafood seasoning and is served with 350 lbs of coleslaw, 250 gal of iced tea, 2,400 rolls and 90 watermelons.

Frogmore Stew is actually not a stew and it contains NO Frogs!

Frogmore Stew is considered a classic Low Country South Carolina dish. This dish is also know as Low-Country boil, Tidewater Boil, and Beaufort Boil. Frogmore Stew gets it’s name from a place that has only a post office on one side of the road and a two-story white country store on the other.

Frogmore is the mailing address for the residents of St. Helena Island just off the South Carolina coast. The town was named by John Grayson, and early owner, named after his ancestral English country estate in England.

Frogmore Stew has become a current favorite at some fancy restaurants in Charleston and some of the resorts along the Carolina coast. This seafood boil is usually served on paper plates around newspaper-covered picnic tables outdoors, with plenty of ice-cold beer.

Beaufort historian, Gerhard Spieler believes that the recipe was the invention of local shrimpers who used whatever food items they had on hand to make a stew.

Richard Gay of Gay Seafood Company also claimed to have invented Frogmore Stew. On National Guard duty in Beaufort in the 1960s, he was preparing a cookout of leftovers for his fellow guardsmen and he brought the recipe home to the community of Frogmore with him, putting out copies of the recipe at his seafood market and selling all the necessary ingredients.

My version of this classic feast includes an eccentric touch of curry powder, as Charleston’s early recipes often included this ingredient due to its serving as a major trading port with India during the 18th century. My preferred blend of curry powder is Penzey’s Maharajah – get it here.

I also prefer this brand of seafood boil seasonings.