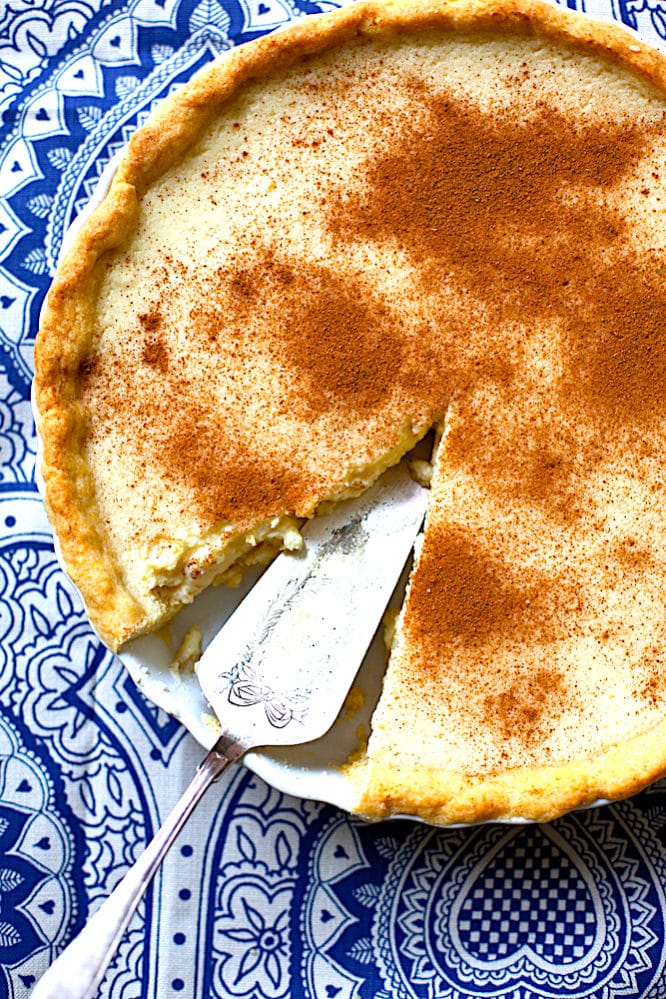 Citizens – the profound sweet tooth possessed by the lactic-loving TFD has found its ultimate expression in this special dish from South Africa, known as melktert! This will become your next favorite dessert, as it is everything you could ask for: rich, sweet, delicious and not at all difficult to make!

South African cuisine reflects the diverse range of culinary traditions embodied by the various communities that inhabit the country. Among the indigenous peoples of South Africa, the Khoisan foraged over 300 species of edible food plants, such as the rooibos shrub legume, whose culinary value continues to exert a salient influence on South African cuisine.

Subsequent encounters with Bantu pastoralists facilitated the emergence of cultivated crops and domestic cattle, which supplemented traditional Khoisan techniques of meat preservation. In addition, Bantu-speaking communities forged an extensive repertoire of culinary ingredients and dishes, many of which are still consumed today in traditional settlements and urban entrepôts alike.

As the British colonial enterprise in South Africa proceeded into the eighteenth and nineteenth centuries, immigrants from Asia, many of whom arrived as indentured laborers in the nineteenth century, further enriched the culinary oeuvre of South Africa. In particular, Indian South Africans – and, to some extent, Chinese South Africans – brought a wealth of spices, seasonings and dishes, historically associated with Kwa-Zulu Natal, although Indian cuisine is currently widely available across South Africa and savored by many ethnic groups.

Melktert (Afrikaans for “milk tart”), is a South African dessert consisting of a sweet pastry crust containing a creamy filling made from milk, flour, sugar and eggs.

The ratio of milk to egg is higher than in a traditional Portuguese custard tart (Pastel de nata) or Chinese egg tart (dan ta), in which both was influenced by the Portuguese, resulting in a lighter texture and a stronger milk flavour.

Melktert is described as an African dessert that shows distinctive Dutch traits. Melktert seems to have come straight from Dutch Medieval cooking, via the Dutch settlers in the Cape in the 1600s. Some people trace its origin back to a dish described by Thomas van der Noot in 1510 in his recipe book, “Een notabel boexcken van cokeryen” (A Notable Book of Cookery).

Dutch settlers brought early recipes for this cinnamon-dusted custard pie to the southern tip of Africa in the 17th century. With them came their native tongue, which blended with other languages to form Afrikaans, now one of the official languages of South Africa.

Melktert is Afrikaans for “milk tart,” and while the pastry lacks official designation, it’s the closest thing the country has to a national dessert pie.

Many of the Dutch settlers on the Cape of Good Hope were dairy farmers, hence melktert’s name and creamy ingredients. Interpretations may vary, but milk, sugar, eggs, and a thickener (such as flour) are fairly consistent across traditional recipes.

Bakers sprinkle cinnamon on top, and some mix the spice into their milk. Depending on ingredients and preparation, the texture of the pie ranges from wobbly to firm. Crusts might be short-crust, puff pastry dough, or nonexistent.

Chefs riff on classic takes with additions such as citrus and wine, but variations aside, melktert remains ubiquitous, beloved, and distinctly South African.

My Citizens, I am confident you will find this African recipe more than worthy of both your time and effort! It does, after all, come from The Food Dictator Himself!

Do NOT follow this link or you will be banned from the site! Click here to see our Privacy Policies, Citizen!
627shares
wpDiscuz
0
0
Would love your thoughts, please comment.x
()
x
| Reply