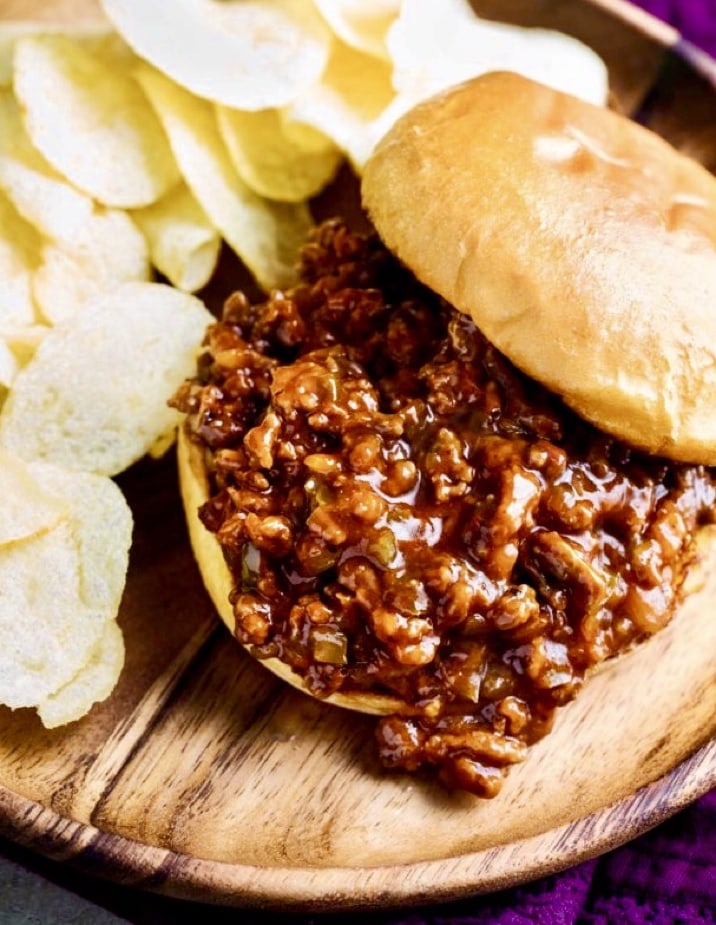 My Citizens, there can be no doubt whatsoever that the love held by the Divine TFD for complexity in recipes and dishes alike is both ingrained and beloved by the Ruler of TFD Nation.

That said, today I will share with you my recipe for a delicious (and by TFD standards, not difficult to make) childhood staple – Sloppy Joes!

A sloppy joe is a sandwich consisting of ground beef or pork, onions, tomato sauce or ketchup, Worcestershire sauce, and other seasonings, served on a hamburger bun. The dish originated in the United States during the early 20th century.

Marilyn Brown, Director of the Consumer Test Kitchen at H.J. Heinz in Pittsburgh, says their research at the Carnegie Library suggests that the sloppy joe’s origins lie with the “loose meat sandwiches” sold in Sioux City, Iowa in the 1930s and were the creation of a cook named Joe.

References to sloppy joes as sandwiches begin by the 1940s. One example from Ohio is a 1944 Coshocton Tribune ad under the heading “‘Good Things to Eat’ says ‘Sloppy Joes’ – 10c – Originated in Cuba – You’ll ask for more – The Hamburg Shop” and elsewhere on the same page, “Hap is introducing that new sandwich at The Hamburg Shop – Sloppy Joes – 10c”.

The term sloppy joe’s had an earlier definition of any cheap restaurant or lunch counter serving cheap food quickly or of a type of casual clothing.

Citizens, I know you would be driven insane by eldritch existential horror if I proffered you a recipe that didn’t have at least 10 ingredients – this recipe is no exception, so your sanity remains your own (for now!).

One key change I made from the classic recipe – I don’t like green peppers, as they are both bitter and prone to causing gastric upset. I use red bell peppers instead. I also use beef stock instead of the traditional plain water – it adds savor to the final dish.

You can buy demiglace in small quantities that are easy to work with here. Sir Kensington’s is the best ketchup on the planet – you can buy it here. Using balsamic vinegar is the perfect flavor choice for this recipe – I don’t know why I’m the only one who seems to use it…

While my recipe has multiple layers of flavor, it is by no means difficult to make – this can be ready in under an hour (including prep time) and will give you and yours a delicious meaty treat! Just follow my iron-clad rules for success! First – use only buns made from potato bread or brioche. Second – lightly toast the inside of the bun with butter. Third – use my secret ingredient – some ground sausage meat. Four – don’t mess with my recipe. 😉

Do NOT follow this link or you will be banned from the site! Click here to see our Privacy Policies, Citizen!
38shares
wpDiscuz
0
0
Would love your thoughts, please comment.x
()
x
| Reply