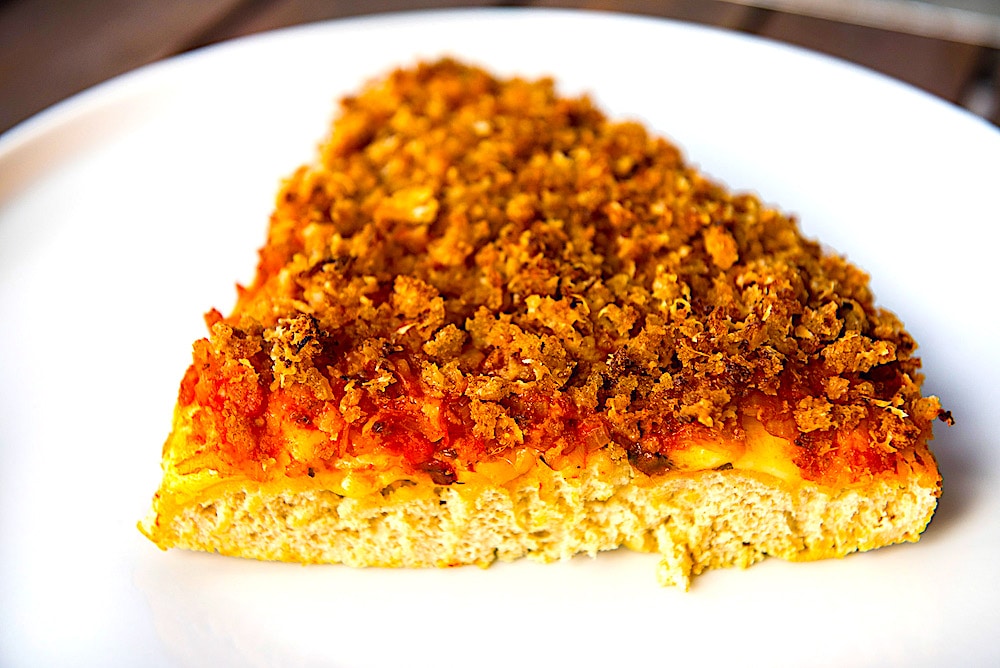 Citizens, we are coming up onto the new year (but not the new decade, that doesn’t start until 2021!) and I wanted to showcase a suitably celebratory dish associated with the holiday. My brain was taxed like a struggling middle-class family until – after deep meditation and suitable practices – pelucid clarity ensued, striking like a thunderbolt of Zen satori enlightenment from a kōan! I MUST share my recipe for sfincione, Sicilian New Year’s pizza with you!

Now, when is a pizza NOT a pizza? Yes, my Zen kōan metaphor continues to hold, and in fact it’s a trick question, because technically it’s not!

This type of pizza became a popular dish in western Sicily by the mid-19th century and was the type of pizza usually consumed in Sicily until the 1860s. The version with tomatoes was not available prior to the 17th century.

The sfincione (or sfinciuni in Sicilian language) is a very common variety of pizza that originated in the province of Palermo. Unlike the more familiar Neapolitan pizza, it is typically rectangular, with more dough, sauce and cheese.

An authentic recipe often calls for herbs, tons of onion, tomato sauce, strong cheese(s) and anchovies and is usually covered with breadcrumbs (metaphorically likened to dust). The sauce is sometimes placed on top of the toppings to prevent it from soaking into the thick dough.

As you can see, this is wildly different from the Sicilian pizza served in the U.S. – same shape, same dough, but totally different toppings and methodology. I’ll post my recipe for Sicilian-American pizza another time, today we are sticking solely with the true scion of Sicily!

This is one the most famous street foods of the city of Palermo, Sicily.

At a first sight it might look like a pizza, but it’s more like a focaccia. It has a very soft dough, thanks also to the little fat used, it’s spongy, it’s usually thick, and its topping is very tasty 🙂while the breadcrumbs on the top give a very interesting crunchiness to this recipe.

You can find street sellers through all the city, selling it on their Ape car and calling the people through a loudspeaker, repeating slogans that became famous and immediately recognizable by the locals. One of these slogans says “Va tastalu, è scarsu r’uogghiu e chinu i pruvulazzu” that translated means “run to taste it, it lacks in terms of oil but is full of dust” 😀

But it’s also a recipe that people in Palermo use to prepare during Christmas time and (TFD note – plus New Year’s Eve!), so it’s also a festive food.

Citizens, my version of this classic and simple pizza is ruthlessly authentic, as always – why should 2020 be any different than the last 5 years? 😉 Like all Sicilian dishes, my version of sfincione has seriously punchy flavors in it – onion, anchovy, a bit of hot pepper, oregano and rosemary and not one but two pungent cheeses! If any of these present an issue – please, just don’t make this recipe.

My very strong first suggestion is that before you attempt this, you read my post on how to make proper pizza here – it will put you on the true Shining Path of culinary glory!

To make sfincione properly, you’ll need proper Italian flour and Italian semolina flour, you can grab both at the links. For the tomato sauce, using anything except true San Marzano tomatoes is an affront to both God and man, so please, use the real deal, you can grab them here.

Genuine Sicilian oregano may be bought here and you are truly dead to me if you use any anchovies except the best, which are these. The two cheeses I specify are the only correct and proper ones for this recipe – you can buy genuine Ragusano here and proper Caciocavallo here.

Oddly, this recipe is supposed to contain rosemary in addition to oregano, but for the life of me I couldn’t find any recipes in English that called for it – so, I call for rosemary-flavored olive oil to be used in the bread crumb topping. My version of this recipe is a Frankenstein’s Monster, stitched together from several sources including Serious Eats and polentaebaccala.com, plus my own preferred techniques and tweaks (as always, noted in the recipe).

Citizens, this is a festive dish of the season in Sicily and deserves a place of grace at your kitchen table – please consider trying it without delay and Happy New Year to TFD Nation! 😀

Do NOT follow this link or you will be banned from the site! Click here to see our Privacy Policies, Citizen!
101shares
wpDiscuz
0
0
Would love your thoughts, please comment.x
()
x
| Reply