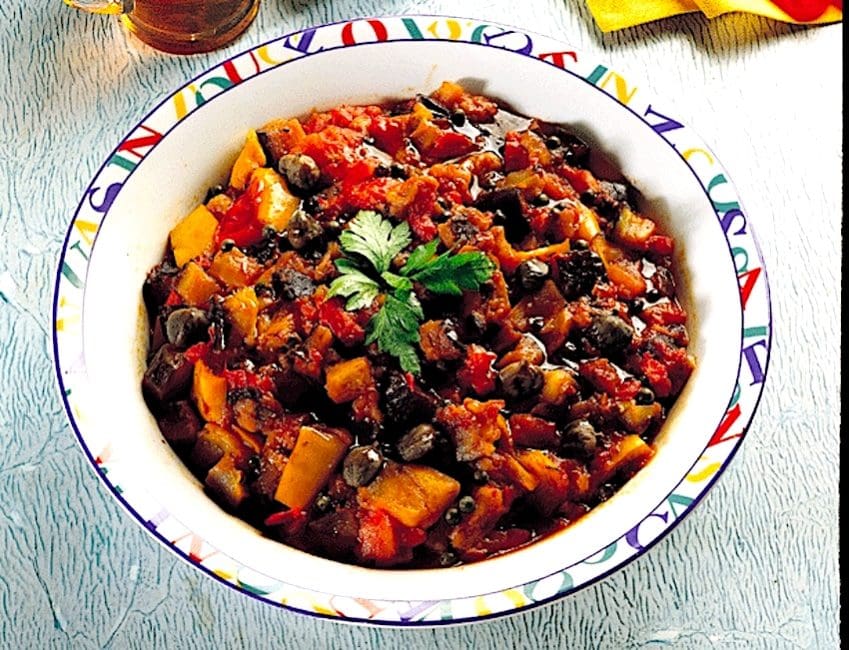 Citizens! Fear the creeping encroachment of anti-Semitism, for it is on the rise worldwide and is a sickening reminder of a hateful legacy that destroys the soul of humanity – as all prejudices do.

Prepare to know the authenticity that is represented in hundreds or even thousands of years in a particular culture’s recipes. As such, and given that the Jewish holiday of Passover is rapidly approaching, I have decided to post not one, not two, but THREE Jewish recipes for use in the Seder dinner.

My last recipe – for Tafelspitz – was the first of these and I now bring you the second, one harkening back to a most ancient Jewish community on the beautiful island of Sicily!

Italy has a long and complex history with its Jewish population, but the mark left on Italian cuisine by the Jewish people is indelible.

“It’s hard to believe, for example, that eggplant and finocchio (fennel), the quintessence of Italian cooking, were originally only used by Jews.”

This is a quote from Pellegrino Artusi in the cookbook “Scienza e L’Arte di Mangiar Bene” published in 1910 and referencing the fact that forty year earlier (1870s) both eggplants and fennel rarely appeared in Florentine markets as they were considered to be Jewish food only.

Few recipes are as quintessentially Italian as caponata – but it originally started as a Jewish dish enjoyed by Sicilian Jews!

Together with tomatoes, a late import into the gastronomic traditions of Italy by way of Spain from the Americas, Caponata has become not merely a Jewish culinary tradition, but like Artichokes, an Italian one.

Caponata (Sicilian: capunata) is a Sicilian eggplant dish consisting of a cooked vegetable salad made from chopped fried eggplant and celery seasoned with sweetened vinegar, with capers in a sweet and sour sauce.

Numerous Sicilian variations of the ingredients exist with some versions adding olives, carrots and green bell peppers, and others adding potatoes, or pine nuts and raisins.

There is a Palermo version that adds octopus, while an aristocratic Sicilian recipe includes lobster and swordfish garnished with wild asparagus, grated dried tuna roe and shrimp. However, these last examples are exceptions to the general rule of a sweet and sour cooked vegetable stew or salad.

Today, most of the Sicilian population enjoys caponata as a typical side dish for fish dishes and sometimes as an appetizer, but since the 18th century it has also been used as a main course among both Sicilian and mainland Italian cuisines.

A similar Neapolitan dish is called cianfotta. The dish is also popular in Tunisian cuisine. The etymology of the name is not entirely known. Some suggest it derives from the Catalan language, others that it comes from the caupone, the sailors’ taverns.

As expertly commented on in this excerpted article from a 2010 issue of Jewish Woman Magazine:

Nacamulli, who grew up in a family of passionate home cooks, was surprised to find that many of her favorite foods were unknown to some of her non-Jewish friends.

Today she teaches Italian-Jewish cooking to both Jews and non-Jews in London (La Cucina di Silvia) and organizes special cooking trips to Italy; her catering company offers a menu of mouth-watering specialties from the cucina ebraica and mainstream Italian repertoires.

Ironically, some of Nacamulli’s Jewish recipes might not be recognized as such by many Italians. For example, Roman Jews created cassola, a dessert somewhere between a pudding and an ethereally delicate cheesecake, in the ghetto. Today, many Romans traditionally end their Christmas dinner with it.

Every July, Venice celebrates Festa del Redentore (Feast of the Redeemer), commemorating the end of a plague that devastated the city in 1576.

Just before the boom and blaze of spectacular fireworks, one of the traditional foods eaten is pesce en saor, fried fish marinated in a sweet-and-sour sauce, seasoned with raisins and pine nuts and served cold.

The dish, and its many variations, is popular throughout the Veneto region, but few, other than culinary historians, are aware of its ancient Jewish origins.

Jewish cooks developed the recipe to preserve fish for the Sabbath day. They doused fried fish with hot vinegar, then to counteract the acidic taste, added sweet sautéed onions, raisins, and pine nuts.

The Jews had acquired a fondness for raisins and pine nuts, a typically Arabic combination, in Sicily (where they lived at least since Roman times) and in Spain. When the edict of expulsion was issued in 1492, many Jews from Spain and Sicily (which, along with Naples and points south, were under Spanish control at the time) fled north, traveling up the Italian peninsula.

The refugees brought their favored foods and flavorings to their new communities, among them marzipan, a taste for sweet-and-sour, and the raisin and pine nut garnish used with meats and vegetables, as well as fish.

Caponata, now ubiquitous throughout Italy, was another Sicilian-Jewish dish. A sweet-savory cold salad of fried eggplant, onions, garlic, olives, and capers (and tomatoes-a later addition from the Americas), it is still labeled alla giudea, Jewish-style, on some menus.

In fact, Jews even brought the eggplant, along with artichokes. Iconic Italian vegetables today, they were despised by most Christians for many years, who considered them the “vile food of the Jews,” according to Italian food authority Pellegrini Artusi. And while the ancient Romans had enjoyed fennel, it was no longer cultivated following the fall of the Empire until the Jews re-introduced it.

In the Roman ghetto, Jews ate lettuce not only raw in salads, but also braised with meats, fish, or vegetables, such as peas, green beans, and artichokes. Perhaps these dishes originated when the sumptuary laws enacted in 1661 limited salad greens in the ghetto to the simplest ones.

Eaten with country bread to sop up the juices mingled with fragrant olive oil, the poor components, he writes, “make excellent gastronomic sense.”

The crowded ghetto in Rome, Italy’s worst, was desperately poor. But olive oil was relatively inexpensive. Cooks could salvage bits and ends of vegetables, pieces of salt cod (baccala), or the cheapest cuts of offal, then batter and deep-fry them, creating glorious fritti misti and fried artichokes to tempt the Romans both inside the ghetto and out.

The Gray Lady, aka The New York Times, wrote a whole article on the recent revival of the Sicilian Jewish community – please read it here, it’s eminently fascinating!

Sicilian versions of Caponata involve intricate sweet and sour flavors, as well as an Arabic touch in the use of pine nuts. The touch of anchovy gives it a uniquely Sicilian flair – try to use it, but the ingredient is optional.

I have every confidence that whether you are Jewish or not, you will LOVE this version of Sicilian Caponata – try it on your upcoming Pesach Seder table if you ARE Jewish! As an appetizer before the Tafelspitz, this is the second of the Trinity (ok, bad pun) of international Jewish recipes that can enliven your Seder.

An important tip – if you see smaller, beige pine nuts with a dark tip – DON’T BUY THEM. Here’s why.