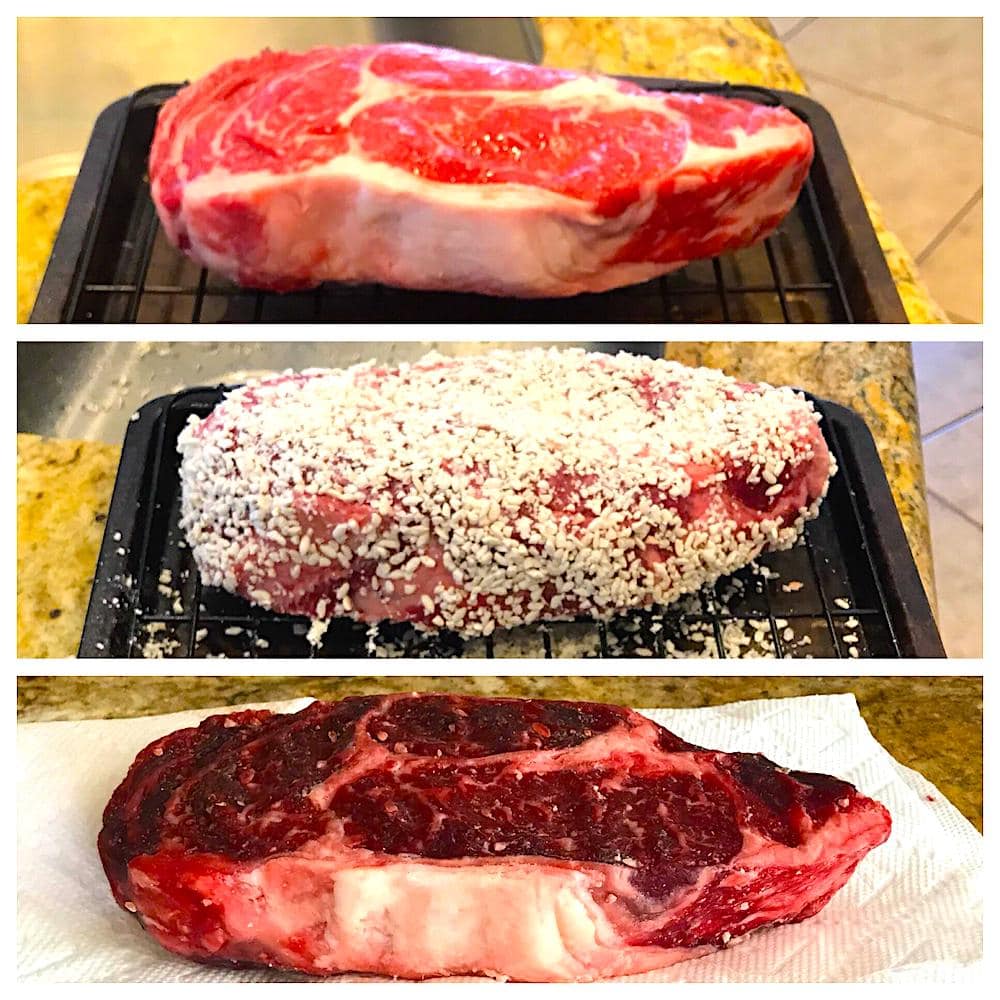 My Citizens, today is a true day of celebration here at the secret and lofty Antarctic lair of the mighty TFD, high on Mount Erebus! Today, a Citizen went WAY above and beyond the Call of Duty (that’s a pun, as he is a very high-ranking executive in a top computer game publisher) and made a huge donation to TFD Nation!

Citizen First-Class Chris – thank you from the bottom of my limitless heart and please accept this post as my way of saying thank you! Chris is a fantastic BBQ chef and meat aficionado par excellence – this technique will help him (and all of you too!) in both competitive meat cooking and home meals alike.

We all love dry-aged steak – it’s umami personified – but dry-aged steak is ferociously expensive and very hard to find. With the technique I am about to teach you, you can have 85-90% of the flavor of a 40-day+ dry-aged piece of beef, but in only 2-3 days and on any regular piece of meat!

As noted in a fantastic article on justonecookbook.com:

Shio koji (塩麹, 塩糀) is a natural seasoning used to marinate, tenderize, and enhance the umami, or richness (one of the five basic tastes) in foods. It’s made of just a few simple ingredients: salt, water and rice koji.

Rice koji (米こうじ, 米糀, 米麹) is steamed rice that has been treated with koji mold spores (Aspergillus oryzae, koji-kin 麹菌, or koji starter). Koji is a specific strain of mold that has been cultured over the centuries.

You may feel hesitant to eat it and wonder why we make rice moldy on purpose. But you have most likely eaten it already!

Koji has been the key ingredient to make miso, soy sauce, sake, mirin, rice vinegar, amazake, shochu, and shio koji. It’s a live food that is rich in enzymes that break down starches and proteins in food into sugars and amino acids.

You can use shio koji to marinade meats, make pickles, flavor your vegetables or use it as a salt substitute. In a recipe that calls for one teaspoon of salt, you can substitute with 2 teaspoons of shio-koji. Shio-koji is really versatile and can be used in any kind of cooking (See Shio Koji recipes)!

Because it is a fermented ingredient, shio koji is known for its many health benefits, which includes (source):

A natural pro-biotic seasoning
Tenderizes food
Brings out the umami and sweetness in foods
Reduces the intake of salt
Aids in digestion
Clear the skin
Anti-aging
Contains minerals, fiber and vitamins

As further elucidated in an article on popsci.com:

In the hipster precincts of Brooklyn, New York, it’s getting so you can’t ride your fixie down the street without getting your mustache caught in a banjo string.

The same type of cultural giggle might be had about a certain fungus, which has, for the past two years, been taking over the menus of America’s top foodie establishments. It’s called Aspergillus oryzae, otherwise known as koji, and chefs are slathering it on everything from salad dressings to steaks.

Koji ferments food. Japanese cooks have used it for centuries to make soy sauce, miso, and natural sweeteners. They also use it to brew sake. It’s considered the national mold. Kind of like a microscopic mascot that imparts umami wherever it goes.

The science behind koji is less well-known. Its spores are fond of hot and humid environments (what spore isn’t?), and grows on cooked rice. As they get bigger, they release biochemical agents-protease enzymes that break down protein and amylases that digest starch. When mixed with, say, soybeans, the ensuing culture helps transform the concoction into soy sauce.

But when applied to steak, koji does something amazing. Its powerful enzymes slowly tenderize the meat. Innovative chefs have found that in just 48 hours, koji can turn a fresh-cut piece of beef into something that resembles, in texture and taste, a 45-day-aged steak. A koji-aged New York strip, properly cooked, will offer up the same nutty and funky flavor as one that’s been professionally cured, and with a touch of miso sweetness.

My version incorporates two other ingredients that assist in adding umami – a hint of ground dried porcini powder to aid in the mushroom-like flavor of dry-aging and a touch of dried smoked katsuobushi – the key ingredient in dashi broth.

Using these ingredients and techniques, you can serve a steak that tastes like a $75 restaurant cut but costs a fraction of that! Koji-innoculated rice can be purchased here, porcini powder can be bought here and top-quality katsuobushi here.

Thank you again, Citizen First-Class Chris and to all other members of TFD Nation – take a hint from Chris and help keep the lights on here – click the donate now button on the right side of your screen (or the bottom if you’re on your mobile phone)!