Citizens, whilst it is very true that I am a Pesto zealot of the Genovese-style, I will also share a secret with you, only whispered amongst those “in-the-know” purists who defend the honor of the recipe with all the fervor it deserves. Of these, I count none greater than the legendary Pesto Maestro Luciano Zeffirino! 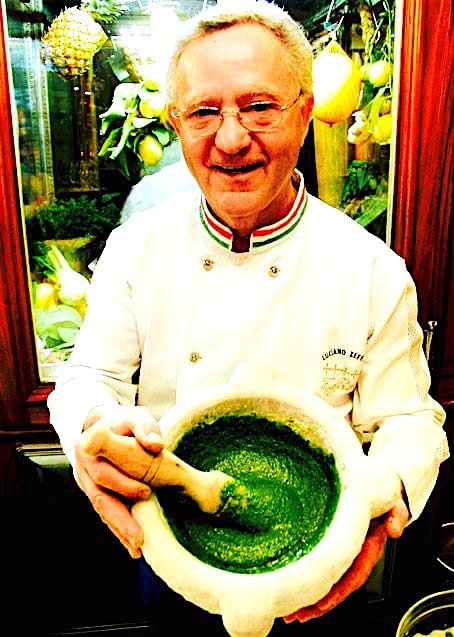 The secret is that there is actually more than one style of Pesto, despite the justified orthodoxy of the Genovese pesto style!

The name is the past participle of the Genoese verb pestâ (Italian: pestare), which means “to pound”, “to crush”, in reference to the original method of preparation: according to tradition, the ingredients are “crushed” or ground in a marble mortar through a circular motion of a wooden pestle. This same Latin root, through Old French, also gave rise to the English noun pestle.

Strictly speaking, pesto is a generic term for anything that is made by pounding; that is why the word is used for several pestos in Italy. Nonetheless, pesto alla genovese (“Genoese pesto”) remains the most popular pesto in Italy and the rest of the world.

Pesto is thought to have two predecessors in ancient times, going back as far as the Roman age. The ancient Romans used to eat a similar paste called moretum, which was made by crushing garlic, salt, cheese, herbs, olive oil and vinegar together.

The use of this paste in the Roman cuisine is mentioned in the Appendix Vergiliana, an ancient collection of poems where the author dwells on the details about the preparation of moretum.

During the Middle Ages, a popular sauce in the Genoan cuisine was agliata, which was basically a mash of garlic and walnuts, as garlic was a staple in the nutrition of Ligurians, especially for the seafarers.

The introduction of basil, the main ingredient of modern pesto, occurred in more recent times and is first documented only in the mid-19th century, when gastronomist Giovanni Battista Ratto published his book La Cuciniera Genovese in 1863:

“Take a clove of garlic, basil or, when that is lacking, marjoram and parsley, grated Dutch and Parmigiano cheese and mix them with pine nuts and crush it all together in a mortar with a little butter until reduced to a paste. Then dissolve it with good and abundant oil. Lasagne and Trofie are dressed with this mash, made more liquid by adding a little hot water without salt.”

Although likely originating from and being domesticated in India, basil took the firmest root in the regions of Liguria, Italy, and Provence, France. It was abundant in this part of Italy, though only when in season, which is why marjoram and parsley are suggested as alternatives when basil is lacking.

Ratto mentions Dutch cheese (formaggio olandese) instead of Pecorino Sardo since Northern European cheeses were actually common in Genoa at the time, thanks to the centuries-long commercial trades of the maritime republic.

This recipe for pesto alla genovese was often revised in the following years (a noted revision by Emanuele Rossi occurred in 1865, only a couple of years after Ratto’s Cuciniera), and it shortly became a staple in the Ligurian culinary tradition, with each family often featuring its own pesto recipe (with slight differences to the traditional ingredients). This is the main reason why pesto recipes often differ from each other.

In 1944, The New York Times mentioned an imported canned pesto paste. In 1946, Sunset magazine published a pesto recipe by Angelo Pellegrini. Pesto did not become popular in North America until the 1980s and 1990s.

In a tight jar (or simply in an air-tight plastic container), covered by a layer of extra-virgin olive oil, pesto can last in the refrigerator up to a week, and can be frozen for later use.

Pesto is commonly used on pasta, traditionally with mandilli de sæa (“silk handkerchiefs” in the Genoese dialect), trofie or trenette. Potatoes and string beans are also traditionally added to the dish, boiled in the same pot in which the pasta has been cooked. Pasta, mixed with pesto, has become a well-known dish in many countries today, with countless recipes being posted online for “pesto pasta”.

For example, basil is not the only herb that can be used in Pesto – in the Winter, when Basil is very hard to come by, Pesto is traditionally made with Parsley! I’ve upped the flavor quotient by adding in a number of traditional Sardinian flavor variants, including the unmatched Pecorino cheese of the island, walnuts in place of pine nuts and the addition of anchovy, vinegar, capers, oregano and hot pepper to really amp up the flavor quotient.

This is still Pesto, Citizens – just a different variant from what you are used to! 🙂

TFD currently has a total of 1,364 posts and 1,160,866 words written since December of 2014! Add your voice to My 50,000+ dedicated readers, comment on My recipes and thus become an active member of TFD Nation! Looking for a particular recipe? Search for it in the box above or via the category tags below - there are THOUSANDS of the finest in world and historic recipes here!