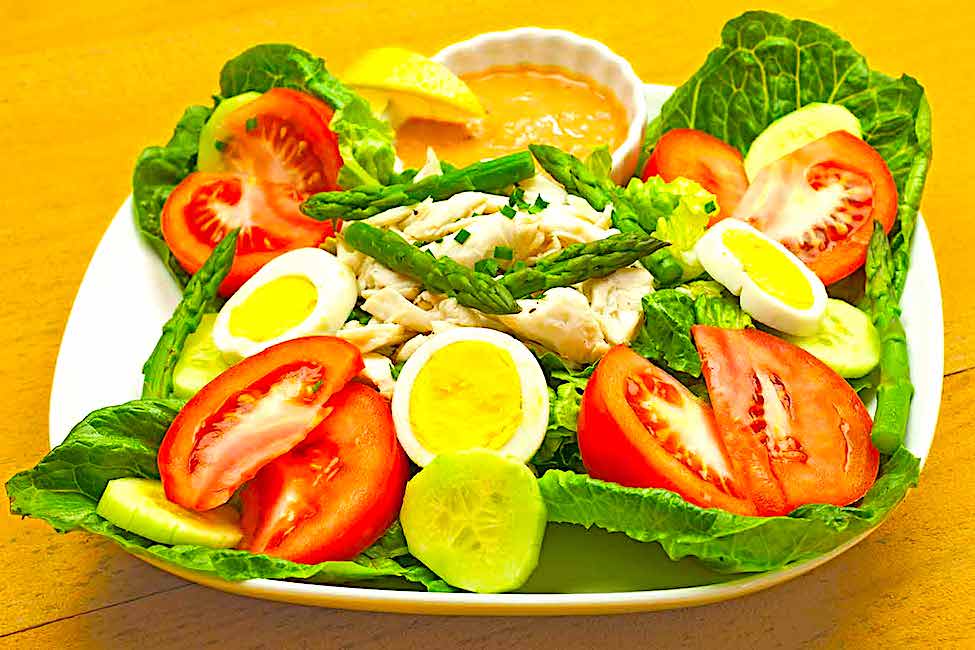 Citizens, the temperature is sizzling all over the world, and few things put me more in the mind for an ice-cold chilled salad! Even better when said salad is laden with sweet crab, as in the classic Crab Louie salad from my home city of San Francisco! 🙂

Crab Louie salad, also known as Crab Louis Salad or the King of Salads, dates back to the early 1900s and originates on the West Coast of the United States.

The main ingredient for Crab Louie, as the name suggests, is crab meat. The preferred crab is, of course, Dungeness Crab, but other crab meat can be substituted, including cheaper imitation crab meat. Doing this will, however, get you soundly lynched by TFD and his minions in SF!

Although variations of the recipe exist, an essential ingredient is a creamy dressing such as Louis dressing, Thousand Island dressing or Green Goddess dressing. This dressing is either served on the side or mixed with the other ingredients, depending on which recipe is used.

Crab meat,
Hard boiled eggs,
Tomato,
Asparagus,
served on a bed of Iceberg lettuce with a Louie dressing based on mayonnaise and chili sauce on the side.

Other ingredients such as olives and green onions have also been listed as ingredients in some recipes.

The exact origins of the dish are uncertain, but it is known that Crab Louie was being served in San Francisco, at Solari’s, as early as 1914.

A recipe for Crab Louie exists from this date in a publication entitled Bohemian San Francisco by Clarence E. Edwords, and for a similar “Crabmeat a la Louise” salad in the 1910 edition of a cookbook by Victor Hirtzler, head chef of the city’s St. Francis Hotel.

Another early recipe is found in The Neighborhood Cook Book, compiled by the Portland Council of Jewish Women in 1912. San Francisco’s Bergez-Frank’s Old Poodle Dog restaurant menu included “Crab Leg à la Louis (special)” in 1908, named for the chef Louis Coutard who died in May 1908.

Credit for the origin of Crab Louie Salad depends on who you talk to and which state of the West Coast you are in. Most historians agree that the salad began appearing on menus of finer West Coast establishments between the turn of the 20th century and World War I.

Other historians suggest that the salad was named after King Louis XIV who was known for his enormous amounts of food he could eat. After his death, it is said than an autopsy was carried out and it revealed that his stomach was twice the size of that of ordinary men. You be the judge of this!

1904 – Some credit the origin of Crab Louis Salad to the chef at Seattle’s Olympic Club in Washington. In 1904, when the Metropolitan Opera Company played in Seattle, Washington, Enrico Caruso (1873-1921), considered the world’s greatest tenor, kept ordering the salad until none was left in the restaurant’s kitchen.

1910 – It is also said the salad was created in San Francisco by either the chef at Solari’s Restaurant. Helen Evans Brown, in her cookbook West Coast Cook Book, states the following on the history:

Just which Louis invented this West Coast specialty I am not prepared to say, but only because I don’t know. I do know, however, that it was served at Solari’s, in San Francisco, in 1914, for Clarence Edwords gives their recipe for it in his epicure’s guide, Bohemian San Franciso.

1914 – The Davenport Hotel in Spokane, WA claims that the original founder and owner, Louis Davenport, created this dish for the hotel restaurant. The salad is still on their menu today. Lewellyn “Louis” Davenport came to Spokane Falls, Washington Territory, in the Spring of 1889 at the age of 20 from San Francisco, CA.

1917 – James Beard (1903-1985), a native of Portland, Oregon spoke highly of the Crab Louis. Evan Jones, in his book Epicurean Delight: The Life and Times of James Beard says:

Most probably, in those years his mother would take her son to restaurants that served food aimed at pleasing the average Oregon palate.

One of these was the Bohemian, a commendable dining place that Beard remembered particularly for a dish called Crab Louis, Writing about this chili-tinged way of serving Dungeness crab, he wanted to believe it had been first served at the Bohemian and later he sparred with his friend, Helen Evans Brown, who credited San Francisco’s Solari Restaurant for its origin.

1919 – Famed chef, Victor Hirtzler, is said to have included a recipe for the salad in The Hotel St. Francis Cookbook, originally published in 1919.

1950s – The Palace Hotel in San Francisco, California is noted as making the salad famous. Dungeness crab is considered the symbol of the San Francisco fishing industry with sidewalk vendors selling fresh-boiled crab during the winter months.

Citizens, my version of this King of Salads includes California avocado as well as capers, radish, cucumber and scallion brushes. Omit these if you so prefer. The dressing is a bit more complex than usual, as is typical of TFD!