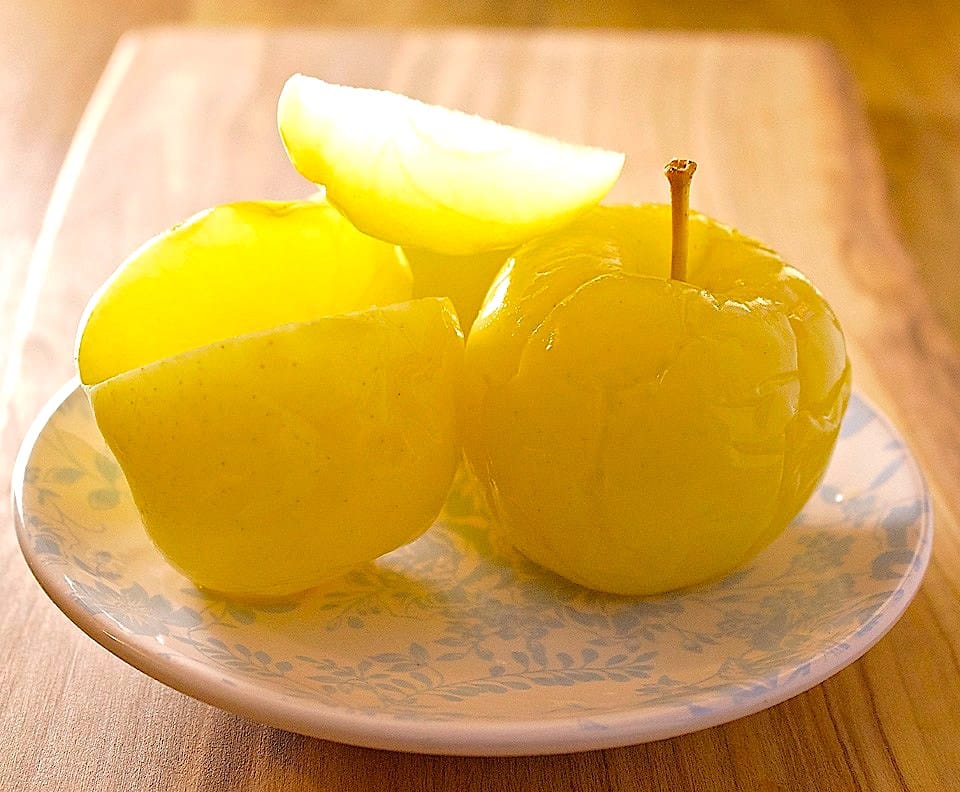 Citizens, your frequently flavorful and occasionally sour Potentate – the almighty TFD! – is delighted to inform you that he just picked up a copy of a wonderful new cooking tome! I speak of The Noma Guide to Fermentation and I will look forward to sharing select recipes from it with you in the future!

It has instead inspired me to grant you a rare benison – not venison, BENISON: a blessing! – of an heirloom Russian fermented recipe that will knock your socks off!

I speak of fermented apples, a classic Russian pickle that will wow your tastebuds in a way even President Putin would approve of!

Antonovka or Antonówka is a group of late-fall or early-winter apple cultivars with a strong acid flavor that have been popular in Russia (Soviet Union and the Russian Empire) as well as in Poland.

The most popular Russian variety is Common Antonovka (Антоновка обыкновенная), from which other cultivars derive. Poland has two varieties: Antonówka Zwykła (same, as in Russia) and Antonówka Biała also known as Śmietankowa (Antonówka White or Creamy) with considerably larger and whiter fruit ripening in late September, but also a shorter shelf-life.

Its popularity is explained by the Antonovka tree’s ability to sustain long harsh winters typical for some regions of Eastern Europe and Russia and for its superior fruit preservation qualities. Sometimes nicknamed “the people’s apple” (народное яблоко), the Russian variety was especially popular among the dacha owners, and remains widely grown at dachas in many Post-Soviet states.

Due to the relatively low ratio of sugars in the fruit, Antonovka apples are especially well-suited for apple pies and late apple wine. The taste of the wine is noticeably lighter than wine from sweeter cultivars. In Poland, Antonówka is used mostly for apple preserves.

Antonovka is a cultivar of vernacular selection, which began to spread from Kursk region of Russia in the 19th century. While the fruit-bearing trees have not received a wide recognition outside the former Soviet Union, many nurseries do use Antonovka rootstocks, since they impart a degree of winter-hardiness to the grafted varieties.

On August 19, 2008 the monument to Antonovka apple was unveiled in Kursk. The sculpture was by Vyacheslav Klykov and has a diameter of 1.5 meter. Ivan Bunin’s early short story, Antonov Apples (1900), is a kind of ode to this apple cultivar as a lyric metaphor to the departing world of Russian landed gentry.

As noted on the exceptional blog beetsandbones.com, where I discovered this recipe:

Brined (or lacto fermented) apples are as essential to Russian food tradition as kvass and rye bread. As all fermented foods, it was a way to preserve nutrients from harvest to harvest. Of course, times have changed, and wax-covered neon-in-February fruit made its way to the Russian markets too. But folks still carry on the ages old tradition, if not with some modifications.

There are still people who make Russian brined apples the way their great-great-grandparents did — in large oak barrels (dubovaya bochka) lined with rye straw. That prevents apples from mechanical damage and enhances flavor. Apples get a topping of more straw and clean burlap. Then folks seal the barrels, leaving small openings for pouring the brine. Those openings serve for adding water during the course of fermentation.

There is a plenitude of recipes for Russian brined apples in the old country. Some are apples only, some have salt and the same pickling spices as sauerkraut and cucumber pickles. In fact, they often ferment in the same vessel as sauerkraut. And other recipes use honey or sugar and ‘sweet’ spices like cinnamon, cloves, cardamom.

One common thing is the use of firm, very ripe yellow apples from the late harvest, September to October. The Russian name for those apples is Antonovka, this is from the name image search to give you an idea of what they look like.

I tried brining red apples and they get mushy and discolored, yuk! Good apples wrinkle slightly and get almost translucent under the skin. They can be firm or on the soft side, but never mushy. Golden Delicious work okay. Although I haven’t gotten that translucency from them that I remember from my childhood, I do enjoy them. Every fall I get some mystery yellow apples at the farmers market, small, fragrant and beautiful — those work really well for brining.

My favorite recipe is with honey, rye flour and rye malt and some mint. Rye gives a subtle fragrance that I just love and honey keeps apples from getting sour. If I tried to describe the taste and texture, it would be like biting into lemon lime soda, fizzy and fresh, just amazing.

I use rye starter to get fermentation going, which is a popular practice in the north of Russia; it allows PH to drop very quickly and prevents any off-flavors.

Fermented red rye malt, called ‘Solod’ in Russian, is another ingredient often added to brined apples. Rye is very quick to sprout and my time from soaking to drying the sprouted berries is less than two days. You can also buy it already made here on Amazon.

The advantage of sprouted rye is that grain starches turn into simple sugars that are an easy fuel for fermentative yeast and bacteria, and the quicker you can establish a good environment for the little guys, the more predictable your fermenting outcome would be.

Folks often add leaves from sour cherry and black currant to the brined apples, which add a very nice fragrance, if you happen to be fortunate to have access to those. Otherwise, try this recipe to get a baseline, then let your imagination guide you. 🙂

Make sure to not use red apples – you will not want to eat them, just take my word for it!

Unripe red apples that are green in color or crab apples don’t work either.

Do not use non-organic store bought apples, the wax coating will prevent the brine from penetrating the apples. And it’s not a good idea to poke holes in the apples to go around that.

You want to monitor the water level closely. Apples need to stay submerged in brine all the time, otherwise they will get brown and mushy. Apples will absorb water (some more than others) so you will need to add more to keep the apples covered.

Whey is not used in any of the traditional recipes for brined apples, even though it is widely available. This recipe is not something I came up with trying to be complicated – it is a very old recipe that I’m simply sharing with you.

You want to monitor the water level closely. Apples need to stay submerged in brine all the time, otherwise they will get brown and mushy.

Apples will absorb water (some more than others) so you will need to add more to keep the apples covered. Please make sure to not use red apples – you will not want to eat them, just take my word for it!

Citizens, this is the PERFECT time to make and try this recipe – I hope you do so with utmost alacrity! 😀

I have made a few tweaks to the original recipe from beetsandbones.com – I added a bit of dill and horseradish as well as some sour cherry leaves, as I find they complement the flavor and aroma of the apples quite well. Feel free to leave them out if you prefer the excellent original recipe!