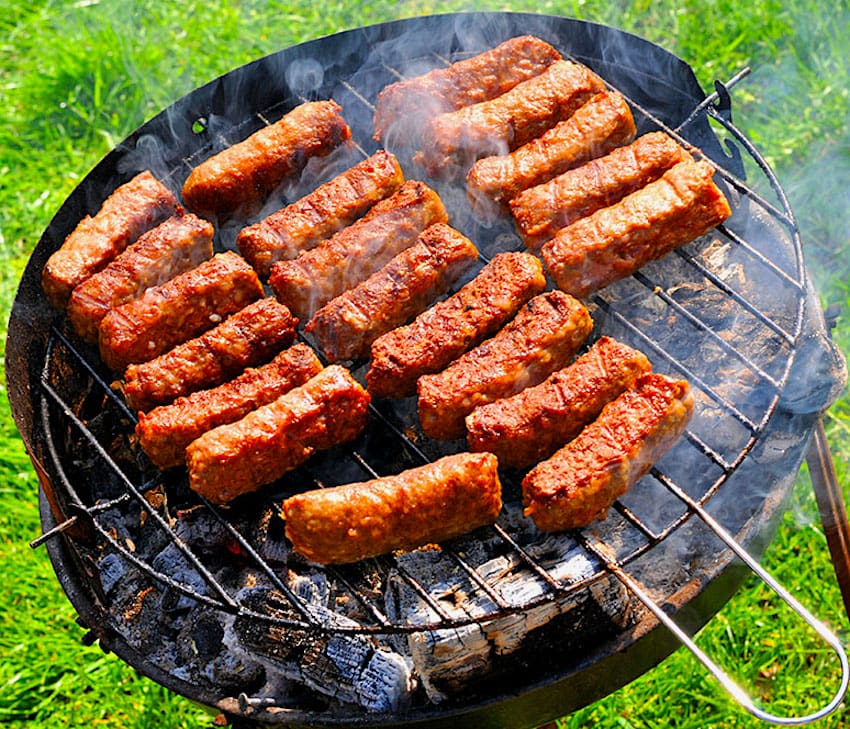 Citizens, the need to preserve nearly lost recipes is one of any number of life missions held by your obsessive Leader – the Man of La Mancha Himself, the Mighty TFD! It is doubly true if it is one of the many nearly-extinct recipes of the Jewish heritage, especially those of the great Delicatessens of yore!

The uniquely Jewish-American Karnatzlach sausages (the name is Yiddish, not Romanian) are kissing cousins to the Romanian Mititei beef sausages – but with a LOT more garlic, which might indicate a possible Transylvanian origin (Transylvania grows most of Romania’s garlic – Dracula notwithstanding…). Despite the usage of the term “sausages”, neither actually are as they are not stuffed into casings. They are pretty much heavily-spiced hamburgers molded into sausage shape and then grilled (or fried).

This is a recipe I dimly remember enjoying when I was a child in Brooklyn, and it is one of the two great, lost recipes of the superlative Roumanian (yes, the “U” is correct in this usage) Jewish steakhouses that once were the pride and joy of NYC!

Sadly, only one remains today – Sammy’s – and it is not what it once was. This recipe (and the next one I shall share after this!) constituted the ne plus ultra of these establishments and I am honored to share my version of it with you today!

One of the great original Roumanian steakhouses was Moskowitz & Lupowitz, where this was served under the name of “Carnatzle” – here is a menu of theirs from the early 1960’s showcasing it. 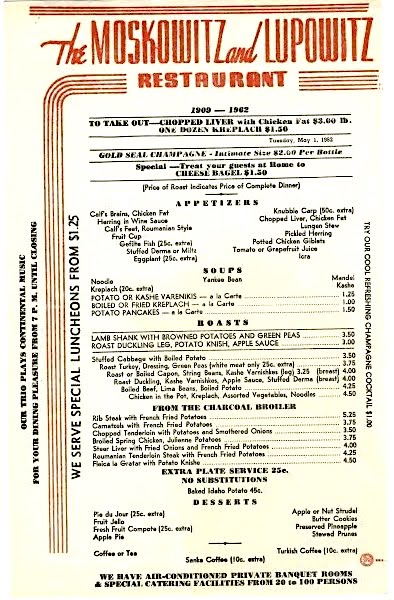 As noted in an excellent article on vanishingnewyork.blogspot.com:

Don’t ask me why, but lately I’ve had the 1950 Pincus Sisters rendition of the Moskowitz and Lupowitz radio jingle in my head. This is odd, considering I wasn’t alive in 1950, I don’t speak Yiddish, and I never visited the Romanian-Jewish restaurant that stood on the corner of 2nd Street and 2nd Avenue until 1966.

The restaurant (where “the finest Jews come to eat”) was founded in 1909 by Romanian immigrants (Joseph Moskowitz was a child prodigy on the cymbalom and went on to a somewhat illustrious music career). It was known as a sophisticated hotspot–the tables were covered in linen, the waiters wore black ties–and thus became a favorite of Yiddish actors and many celebrities of the time, like Milton Berle, Eddie Cantor, and Sid Caesar.

Its listing in the 1939 Federal Writer’s Project guide to the city, under Jewish food, notes that lunch could be had for 55 cents and dinner from 85 cents.

LaSalle Academy bought the property in 1966 and moved in soon after. The building might be the same, but if it is, it’s been changed so thoroughly that it’s unrecognizable from its history.

Moskowitz & Lupowitz was one of the only fancy Jewish restaurants on the Lower East Side and maybe it’s on my mind because of the whole Octavia’s Porch opening.

The owner of the new Avenue B business calls it “the city’s first culturally Jewish restaurant with a sophisticated approach to feature global tastes and flavors.” But Moskowitz & Lupowitz was here long before Octavia’s. They were culturally Jewish, sophisticated, and globally flavored. Octavia’s will be serving many of the same dishes, like Kreplach, Gefilte Fish, and Chicken Livers, and they’ll be doing “artisanal” tricks like making caramel matzo and pouring it over ice cream. Still, I doubt they’ll have a Yiddish radio jingle such as that once sung by the Pincus Sisters for Moskowitz & Lupowitz.

My Romanian sausages recipe is marked by a truly EPIC amount of garlic (as it is supposed to have!) and is based on one I found (and modified rather substantively) from meatsandsausages.com. I hope you see fit to try this taste of late 19th century and early 20th century Jewish America’s sausages – it deserves to be more widely enjoyed and known! 🙂