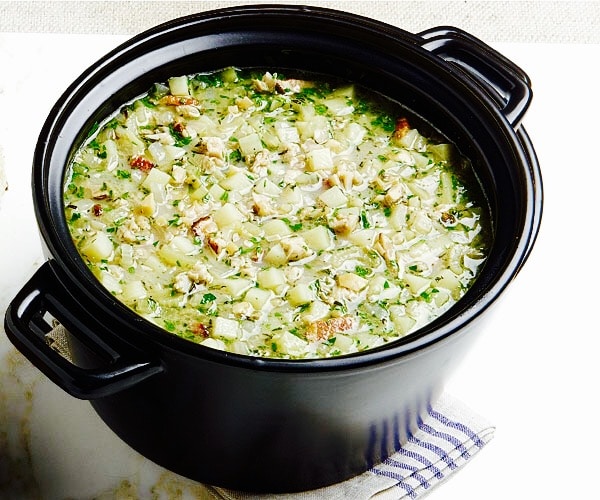 Citizens, I had the great pleasure of meeting a VP from Epic Games during my trip to Norway early this week. A truly awesome guy, we bonded over our shared love of great food and since he lives in Rhode Island, I thought I’d pay homage to the state’s cuisine in his honor!

Rhode Island is the smallest in area, the eighth least populous, and the second most densely populated (behind New Jersey) of the 50 U.S. states; its official name is also the longest of any state in the Union.

Rhode Island is bordered by Connecticut to the west, Massachusetts to the north and east, and the Atlantic Ocean (via Rhode Island Sound and Block Island Sound) to the south.

Rhode Island was the first of the original Thirteen Colonies to declare independence from British rule, declaring itself independent on May 4, 1776, two months before any other colony. It was also the last of the thirteen original colonies to ratify the United States Constitution.

Rhode Island’s official nickname is “The Ocean State”, a reference to the state’s geography, since Rhode Island has several large bays and inlets that amount to about 14% of its total area.

Despite its tiny size, Rhode Island is home to many distinctive, if not unique recipes – not the least of which is perhaps the rarest incarnation of American Chowder!

Believed to be one of the earliest forms of clam chowder, the Rhode Island version lacks tomatoes like the Manhattan-style or the dairy products used in New England-style clam chowders. In this version, there is nothing to hide the sea flavor freshness of the clams – the broth is clear.

Rhode Island clam chowder continues to be served in hotels and restaurants long established in New England, in areas where white chowders are liked by tourists while natives love the clear chowder.

Traditionally, the “South County Style” of Rhode Island, which originated in Washington County, has a clear broth with quahogs (which is a fancy word for a hard clam, or where the Griffins live in Family Guy depending on your point of reference) or Cherrystone clams, potatoes, onions, and salt pork or bacon.

Some Rhodians prefer a touch of Worcestershire sauce in their chowder, and I gladly follow their enlightened lead. I’ve made a far more complex broth as the base for my version of the chowder, including some wine, chicken stock (don’t worry, you won’t taste it, it just adds richness to the broth), carrot, celery, onion, pepper and a touch of fennel seeds (all of the solids are removed before proceeding with the recipe).

I do add some fresh herbs to the final chowder as well – purists may frown, so they are listed as optional.

Citizens, I am extremely fond of this unique chowder – I hope you will feel it worthy of sampling for yourself! 🙂 Try enjoying this with a classic sandwich from much further north in New England.