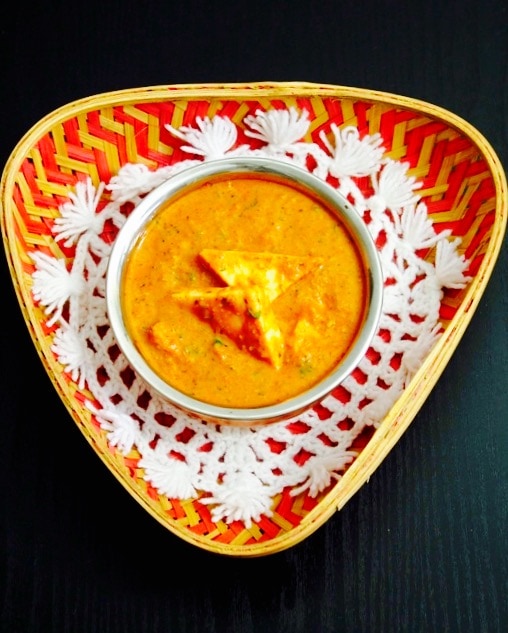 Citizens, shahi paneer is a preparation of paneer (a type of fresh Indian cheese) in a thick gravy made up of cream, tomatoes and spices and is mainly eaten with roti, naan, rice, other breads. The recipe originates in the Indian state of Punjab – Paneer is the word for cottage cheese, and shahi is the term for royal (in reference to the Imperial Court).

It specifically dates to the Mughal (or Mogul) Empire (Urdu: مغلیہ سلطنت‎, Mug̱ẖliyah Salṭanat) or Mogul Empire, established and ruled by a Muslim Persianate dynasty that extended over large parts of the Indian subcontinent and Afghanistan during the 16th and 17th centuries.

Much of the food originating from this period of Indian history is elaborate and rich and despite this dish being basically vegetarian, it is enjoyed greatly by dedicated carnivore TFD (and in fact most people). It is a dish filled with spices, almond paste, cheese and cream that makes it thick creamy and spicy to the taste.

My version of this classic recipe lives up to its Imperial pedigree with the inclusion of Saffron, the most royal (and expensive!) of all spices! A hint of Kewra water adds a floral note that further increases the luxury factor – you can buy it here.

Enjoy this as part of a multi-course royal Indian feast – I’d recommend serving it with this equally noble dish.