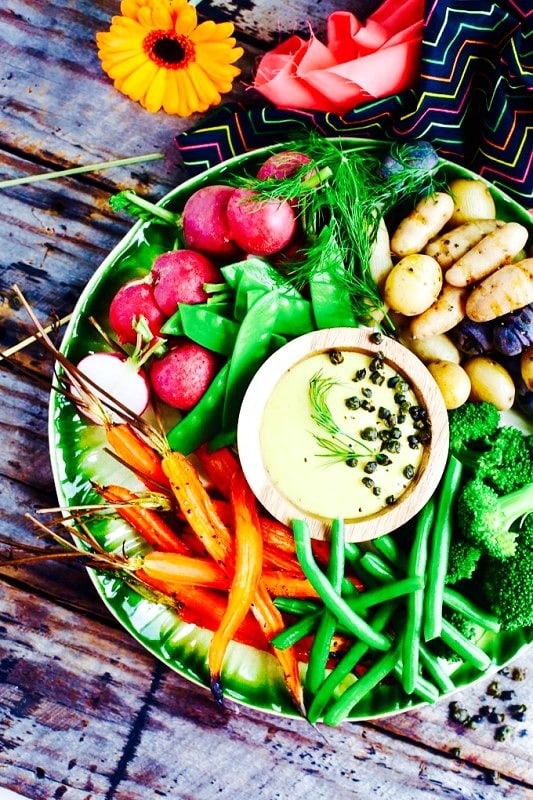 Citizens, one of the great celebrations of Summer in the South of France is the making of “Le Grand Aïoli”, the unbeatable combination of a freshly-prepared garlic mayonnaise sauce served with only the freshest vegetables, eggs and fish!

Today, it is fashionable to call any flavored mayonnaise an “Aïoli”. This is heresy most grave in the eyes of your beloved TFD! Aïoli is ONLY flavored with garlic and salt. NOTHING ELSE!!! Aïoli’s name actually means “oil and garlic” in Catalan and Provençal, for God’s sake!

French-Provençal versions of the sauce, from which the English spelling is derived, are typically closer to a garlic mayonnaise incorporating also egg yolks, and lemon juice, whereas Spanish versions without egg and with considerably more garlic have a more pasty texture.

As noted on the site whatscookingamerica.net, the origins of this feast are most ancient indeed!

“Aioli (eye-YO-lee) – Aioli is a thick garlic sauce used in the cooking of Provence, France, and of Catalonia in Spain. It is often compared to mayonnaise in its texture, but it is not actual mayonnaise. It is thought by culinary historians that Aioli is a Roman sauce, the one the Romans called “aleatum” made of garlic and oil.

History: The first apparent written mention of a sauce resembling aioli was by Pliny the Elder (23-79 A.D.), the Roman procurator in Tarragona (a city located in the south of Catalonia on the north-east of Spain.) He writes about garlic (Latin term: aleatum) in his first century book Naturalis Historia. Information below by Peter Hertzmann from his à la carte website:

Natural History (Naturalis Historia) is an encyclopedia published around AD 77–79 by Pliny the Elder (23-79 AD). It is one of the largest single works to have survived from the Roman Empire to the modern day and purports to cover all ancient knowledge.

Whether garlic was introduced to France by the Romans, brought back to France during the crusades, or a native of French soil is not known for certain. (I think it was introduced by the Romans.) Pliny the Elder discusses garlic at some length in his work Naturalis Historia, published in the year 77. He states that it “is generally supposed, in the country more particularly, to be a good specific for numerous maladies.”

Later, in a chapter entitled “Garlic: Sixty-One Remedies,” Pliny writes, “Garlic has very powerful properties, and is of great utility to persons on changes of water or locality. The very smell of it drives away serpents and scorpions, and, according to what some persons say, it is a cure for wounds made by every kind of wild beast, whether taken with the drink or food, or applied topically…. Pliny does not discuss the use of garlic as food, he does comment extensively, however, on how to best grow garlic.”

In Provence, the fish of choice to be served at Le Grand Aïoli is poached salt cod, but any fresh mild white fish, simply cooked (poached, roasted or grilled), is a fine substitute. In France, the feast will also usually include a platter of freshly-cooked snails or stewed octopus.

The vegetables too, are always simply cooked: poached in plain salted water or steamed. Any vegetable that is fresh and in season can be included in Le Grand Aïoli: fresh artichokes, summer squash, roasted red peppers, etc.

It is also traditional to include one or two raw vegetables, such as radishes, tomatoes, sliced fresh fennel, thinly sliced red bell peppers, etc. Often a bowl of cooked chickpeas will be included in the spread. I’ve chosen to garnish my Aïoli with fried capers, feel free to omit them if you so prefer.

Classically there should be at least 6 different items (vegetables, fish, bread) included in the feast, but frequently there are more.

A good rule of thumb is to have, at a minimum, a half pound of (trimmed weight) vegetables per person, in addition to fish and hard-boiled eggs. You should prepare enough of the Aïoli sauce to serve at least ¼ cup per person. Any leftover Aïoli sauce is fantastic spread on a sandwich, or even used as a baste for roast chicken, among many other uses!

Citizens, my vegetable selections are only suggestions; let your Farmers Market be your true guide when preparing this most delicious feast of nature’s bounty! Serve with a good young red wine and your culinary journey to the French Side shall be complete!

For the Fried Capers:

Place the eggs in a small sauce pan and cover with cold water. Bring just to the boil, turn off the heat, cover and let stand for 15 minutes. Refresh under cold water. Peel and halve or quarter.

Trim the beet greens so only a half inch or so of the stems remain. Leave the root intact. Scrub the beets. Place in a baking dish and add a splash of water. Cover with foil and bake in a 375° to 400° oven until tender to the tip of a knife — 45 minutes to an hour. Allow the beets to cool. Trim and peel. Cut into halves or quarters.

The remaining vegetables should be cooked in boiling salted water until just tender. Remove the vegetables from the water and spread on towels to cool.

To prepare the fish, rub each filet lightly with oil and season with salt and pepper.

Arrange in an oiled baking dish, add a splash of white wine or vermouth (TFD prefers vermouth) and cover tightly with foil.

Transfer to a preheated 400° oven and bake until just cooked. This will probably be about 10 minutes. The rule of thumb is 10 minutes per inch of thickness of the filets…but it will be slightly longer if you have a very heavy/thick baking dish. Do not overcook…remember that the fish will continue to cook after it is removed from the oven.

To Make The Aïoli Sauce:

Smash the garlic to a purée with a few pinches of salt. Add half of the garlic to a medium-sized bowl, along with the yolks, warm water and remainder of the salt. Whisk until smooth. Then, very slowly, begin to add the oil in a fine stream, whisking constantly. If you add the oil too quickly, the mixture will not emulsify. As the emulsion begins to take hold, you will be able to add the oil a bit more quickly.

The aïoli will gradually thicken and lighten in color as the oil is added. If it becomes very thick before all of the oil is incorporated, thin with a few drops of water and continue to whisk in the rest of the oil.

Taste the aïoli for seasoning, add more salt and more garlic—as you please. The aïoli will taste best if it has 30 minutes or so to sit. It is best eaten the day it is made. Refrigerate any leftovers.

To Make The Capers:

Line a plate with paper towels. Heat the oil in a skillet set over medium-high heat (If you have a thermometer, the oil should reach approximately 375 degrees.). Carefully drip the capers into the hot oil. Fry for roughly 30 seconds, until crisp. Remove the capers using a slotted spoon and drop them onto the paper-towel lined plate.

Arrange the fish, cooked vegetables and eggs on large platters. Place the olives, chickpeas and radishes in bowls. Place several bowls of the aïoli sauce on the table, garnish with the fried capers and pass a basket of bread.

Add
107shares
TFD uses cookies and we comply with GDPR so you control your personal info! If you continue on, we will assume you are happy with this, Citizen! OkNoRead more