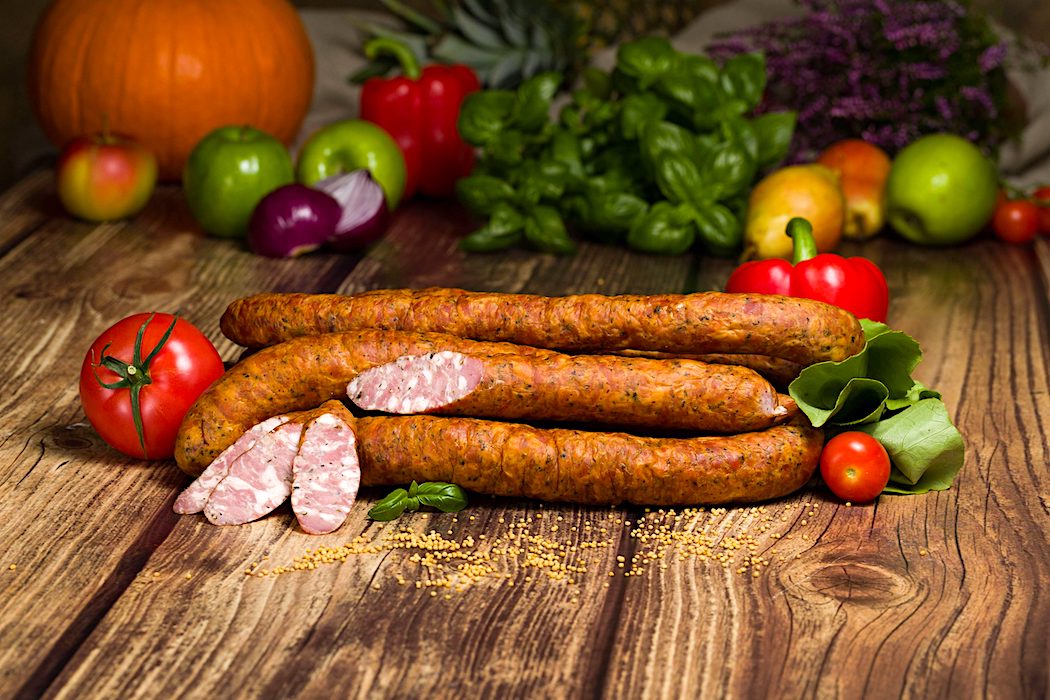 Citizens, the Potentate of Pork, the Monarch of Meats – YOUR TFD! – is pleased beyond words to share with you today’s recipe for a seminal sausage (a VERY bad pun, sorry) that is equally beloved by Poles and Americans alike! I speak of nothing less than the almighty kielbasa of legend and story that is beloved by palates across multiple continents and countries!

Yes, we’ve all had the version from Hillshire Farm – and yes, I do enjoy it very much, but the truth is it is but a pale shadow of the numinous nimbus of glory found in artisanal kielbasa and today that is the very version I will share with you!

Kielbasa (from Polish kiełbasa) is any type of meat sausage from Poland, and a staple of Polish cuisine. In American English the word typically refers to a coarse, U-shaped smoked sausage of any kind of meat, which closely resembles the Wiejska sausage (typically pork only) in British English.

The terms entered English simultaneously from different sources, which accounts for the different spellings. Usage varies between cultural groups and countries, but overall there is a distinction between American and Canadian usage. In New Jersey, Pennsylvania and most areas of Greater New York City, a plural Polish transitional form is used, kiełbasy. Canadians also use the word kubasa, an Anglicization of the Ukrainian kovbasa (ковбаса), and Albertans even abbreviate it as kubie to refer to the sausage eaten on a hot dog bun.

Sausage is a staple of Polish cuisine and comes in dozens of varieties, smoked or fresh, made with pork, beef, turkey, lamb, chicken or veal with every region having its own speciality. Of these, the kiełbasa lisiecka, produced in Małopolskie, has had PGI protection since late 2010. There are official Polish government guides and classifications of sausages based on size, meat, ready-to-eat or uncooked varieties.

Originally made at home in rural areas, there are a wide variety of recipes for kielbasa preparation at home and for holidays. Kielbasa is also one of the most traditional foods served at Polish weddings. Popular varieties include:

The most popular kiełbasa is also called “Kiełbasa Polska” (“Polish Sausage”) or “Kiełbasa Starowiejska” (“Old Countryside Sausage”). This one comes closest to what is generally known in America as “kiełbasa” (a Polish sausage). Nowadays, many major meat packers across America offer a product called “kiełbasa,” usually somewhat different from the original.

In Poland, kiełbasa is often served garnished with fried onions, and – in the form of cut pieces – smoked kiełbasa can be served cold, hot, boiled, baked or grilled. It can be cooked in soups such as żurek (sour rye soup), kapuśniak (cabbage soup), or grochówka (pea soup), baked or cooked with sauerkraut, or added to bean dishes, stews (notably bigos, a Polish national dish), and casseroles. Kiełbasa is also very popular served cold as cold cuts on a platter, usually for an appetizer at traditional Polish parties. It is also a common snack (zagrycha) served with beer or plain vodka.

A common recipe for Polish kielbasa is “Ukraińska kiełbasa”. The recipes traditionally calls for pork, bacon, garlic, allspice, coriander and mustard seeds. It is fried in the oven with garlic to add an additional aroma and infusion. It is in fact the shared popularity of kielbasa in both Poland and Ukraine (where it is known as is called kovbasa’) that is the explanation for the word ‘Ruthenian’ in the recipe. What makes this recipe Ruthenian is the addition of very finely-minced onion (popular in Ukrainian kovbasa), which is NOT found in the standard Polish version – leave it out if you prefer the original recipe!

Ruthenia is an exonym, originally used in Medieval Latin as one of several designations for East Slavic and Eastern Orthodox regions, and most commonly as a designation for the lands of Rus’ (Old East Slavic: Рѹ́сь / Rus’ and Рѹ́сьскаѧ землѧ / Rus’kaya zemlya, Ancient Greek: Ῥωσία, Latin: Rus(s)ia, Ruscia, Ruzzia). During the early modern period, the term also acquired several specific meanings. The ancient land of Rus was ruled by the Rurik dynasty. The last of the Rurikids ruled as Tsars of all Rus/Russia until the 16th century.

The word Ruthenia originated as a Latin designation of the region whose people originally called themselves the Rus’. During the Middle Ages, writers in English and other Western European languages applied the term to lands inhabited by Eastern Slavs. Russia itself was called Great Ruthenia or White Ruthenia until the end of the 17th century and in fact both Poland and Ukraine were once part of Ruthenia, thus my use of the term in describing a sausage with cross-border appeal!

As for kielbasa itself, as eruditely expounded on the wonderful website honest-food.net:

Everyone has his or her own kielbasa recipe. Let me restate that one more time. But there are a few things that distinguish real(ish) Polska kielbasa from the overly weird variants. I owe much of this information to the Marianski brothers, whose book Home Production of Quality Meats and Sausages is indispensable for any serious home sausage maker.

Now as to making these delightful beauties – first off, the key thing to remember when making sausages is to keep EVERYTHING ice-cold! The meat is cubed and chilled in the freezer so that the fat will cut cleanly, the bowls and implements should be kept in your freezer, etc. Of course, like all sausages, they will only be as good as the raw materials you use – so please, try to find some heirloom pork such as Berkshire (aka Kurobota) and some organic, grass-fed beef of top-quality only – like all good kielbasa, this is a mix of both meats! In Polish ‘wiejska’ means rural, country area, away from the city limits – and that is exactly the style we are making today.

To make these, you’re obviously going to need a few specialized tools and ingredients – the most important of which is a quality sausage stuffer! These aren’t as easy-to-find as I’d like, as there are a lot of poor-quality products out there! Thankfully, Amazon stocks this quality vertical model that won’t break your bank, doesn’t take up a lot of space and will get the job done with aplomb! You’ll also need top-quality casings for the sausage – most people use casings made from cellulose these days – the HORROR! I want a REAL, snappy casing on my kielbasa and once again, finding top-quality FRESH pork casing isn’t easy – this company makes the best I’ve found!

Lastly, you’re going to need to smoke these bad boys – and for that, you wither need to have a commercial smokehouse that is willing to do it for you or do it yourself in your own grill or smoker. A smoker is the best choice, but you can effectively ‘cheat’ using this handy accessory in your regular grill – buy it here! For this recipe, I’m (of course) going totally authentic as the Poles would do and use cherry wood for the smoking medium – this is a great brand, but go with your favorite alternative brand as long as it’s cherry wood! A high-quality digital scale is a MUST – as you will see in the recipe, practically every ingredient is weighed to the gram. This is a good model.

You will lastly require some pink curing salt, which is NOT the same thing as pink Himalayan salt – don’t confuse the two! Curing salt is what gives cured meats its pink hue – if you don’t use it, the sausages will be gray, but delicious. The curing salt also prevents the botulinus bacteria from growing in your sausages and inflicting a swift, violent and painful death upon your dinner guests – trust me, just use it. The salt is toxic if ingested in large does, so it is colored pink so you don’t accidentally confuse it with salt or sugar. Keep it away from children and pets in a tightly-closed container and follow the directions on the package for using enough – and this is a good brand.

Citizens, homemade kielbasa is a true revelation and I hope it impresses you sufficiently to take your sausage-making game to the next level – it’s a fun hobby that pays off delicious dividends for many meals to come! For this Polish classic, you can use the final product in a hot dog bun, or do as the Poles do and serve it cut-up on a plate garnished with horseradish, mustard and onion marmalade – this is my favorite brand! Kielbasa is also an essential ingredient in the most famous Polish dinner dish – Bigos, or Hunters Stew!