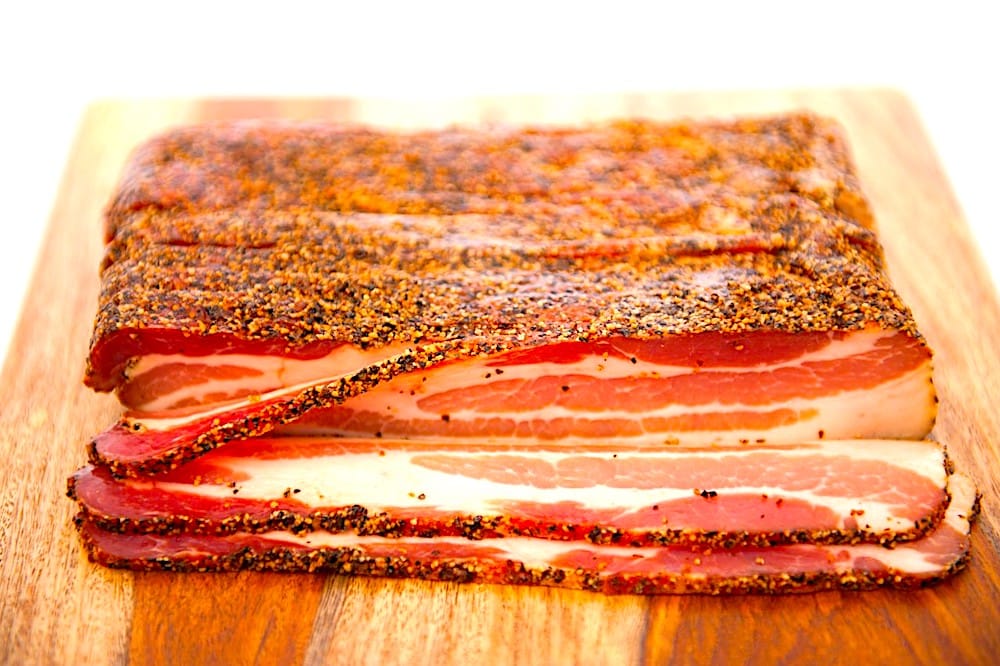 Citizens! There is a magic word, a word with the power of a thousand exploding suns, a word that plays out a symphony of flavor across a million tongues! It can heal the divides of the world, unite left- and right-wingers in an otherwise impossible fashion and can even – it is rumored – bring about world peace and the Age of Aquarius itself.

Not just any bacon, however. I speak of bacon enhanced in the single way possible for this most mystical and – dare I say transcendant? – of smoked meats: by adding the glory of peppered pastrami seasonings to it!

Yes, peppered pastrami bacon. It is a truly sinful experience, one that whispers to your logic centers of nitrates, fat, and the problematic effects on your waistline. Your soul, however, surrenders to the insurmountable need to consume it in mass quantities.

My peppered bacon is THAT good – and now the recipe is YOURS for the taking! 🙂 For a more Asian approach to this most delicious of meats, check out my Chinese bacon recipe here.

Bacon is cured through either a process of injecting with or soaking in brine, known as wet curing, or using plain crystal salt, known as dry curing. For the record, dry curing is where it’s at!

Bacon brine has added curing ingredients, most notably sodium nitrite (or less often, potassium nitrate), which speed the curing and stabilize color. Fresh bacon may then be dried for weeks or months in cold air, or it may be smoked or boiled.

Fresh and dried bacon are typically cooked before eating, often by pan frying. Differing flavors can be achieved by using various types of wood, or less common fuels such as corn cobs or peat.

The Virginia Housewife (1824), thought to be one of the earliest American cookbooks, gives no indication that bacon is ever not smoked, though it gives no advice on flavoring, noting only that care should be taken lest the fire get too hot. In early American history, the curing and smoking of bacon (like the making of sausage) seems to have been one of the few food-preparation processes not divided by gender.

The United States and Canada have seen an increase in the popularity of bacon and bacon-related recipes, dubbed “bacon mania”. The sale of bacon in the US has increased significantly since 2011. Sales climbed 9.5% in 2013, making it an all-time high of nearly $4 billion in US. In a survey conducted by Smithfield, 65% of Americans would support bacon as their “national food”.

Dishes such as bacon explosion, chicken fried bacon, and chocolate-covered bacon have been popularized over the internet, as has using candied bacon. Recipes spread quickly through both countries’ national media, culinary blogs, and YouTube.

Restaurants have organized bacon and beer tasting nights, The New York Times reported on bacon infused with Irish whiskey used for Saint Patrick’s Day cocktails, and celebrity chef Bobby Flay has endorsed a “Bacon of the Month” club online, in print, and on national television. Commentators explain this surging interest in bacon by reference to what they deem American cultural characteristics.

Sarah Hepola, in a 2008 article in Salon.com, suggests a number of reasons, one of them being that eating bacon in the modern, health-conscious world is an act of rebellion: “Loving bacon is like shoving a middle finger in the face of all that is healthy and holy while an unfiltered cigarette smoulders between your lips.” She also suggests bacon is sexy (with a reference to Sarah Katherine Lewis’ book Sex and Bacon), kitsch, and funny. Hepola concludes by saying that “Bacon is American”.

Alison Cook, writing in the Houston Chronicle, argues the case of bacon’s American citizenship by referring to historical and geographical uses of bacon. Early American literature echoes the sentiment—in Ebenezer Cooke’s 1708 poem The Sot-Weed Factor, a satire of life in early colonial America, the narrator already complains that practically all the food in America was bacon-infused.

Citizens, my version of peppered bacon is – of course – dry cured. I cannot recommend strongly enough getting an heirloom pork belly for this recipe – I am especially fond of Berkshire and  Gloucestershire Old Spot, amongst others. My cure is full-on TFD magic, and includes such delights as Bourbon-smoked vanilla sugar, Acacia honey Urfa Biber pepper flakes, Grade A Amber, Rich Taste maple syrup and smoked sweet paprika.

The pastrami spice blend includes Nigella and Ajwain seeds as well as the classic pastrami flavors of black and white peppercorns and coriander seed. I prefer peach wood smoking chips for this recipe.

I have every confidence this peppered meaty delight will make your breakfasts, lunches and dinners a truly amazing experience, !

Do NOT follow this link or you will be banned from the site! Click here to see our Privacy Policies, Citizen!
190shares
wpDiscuz
0
0
Would love your thoughts, please comment.x
()
x
| Reply