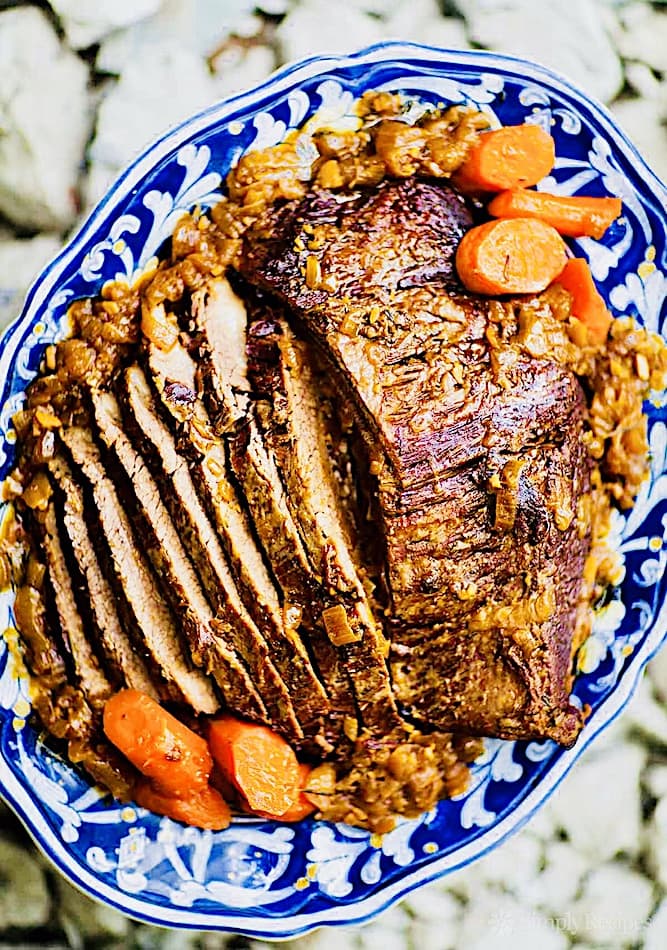 My Citizens, the Jewish holiday of Passover begins tomorrow, so I would very much like to share a recipe redolent of TFD magic – my version of the usually dreaded, sometimes feared and occasionally terrifying Passover Brisket!

As cogently noted on foodandwine.com:

People eat brisket all around the world, from Korea to Vietnam to Pakistan to Italy. It’s cooked differently everywere, but in the United States, brisket gained fame as the largest jewel in the crown of Texas barbecue, while continuing on as the staple for many Jewish families’ yearly Seders. Why does this cut’s popularity endure in these two contexts? The simple answer is it used to be the cheapest option.

Ashkenazi jews have eaten brisket during Passover for a very long time and for pretty sensible reasons. Per Jewish custom, the hindquarters of the beef are not kosher, meaning that Jews have always had fewer cuts to choose from. In addition, brisket has historically been one of the more affordable cuts since it comes from a heavily worked muscle that requires a lot of time to cook. As a result, many Central and Eastern European jews ate brisket as far back as the 1700s, especially during food-centric gatherings like Passover that require a lot of food.

During the mid to late 1800s, waves of Germans and Czechs, including many jews, emigrated to the United States, many of whom made their way to the new state of Texas. According to Daniel Vaughn, the barbecue editor at Texas Monthly and self-described barbecue obsessive, immigrants and local ranchers started exchanging ideas during the late 1800s and early 1900s for how to smoke brisket.

Since brisket was still one of the cheapest beef cuts available in Texas at the time, the largest beef-producing state in the country, there was a lot of brisket available. Long story short, Texas had the space for the cattle. From the cattle came a ton of beef and from that huge amount of beef came brisket’s popularity, since ranchers and immigrants often couldn’t afford the pricier other cuts.

That’s how how brisket became commonplace in Texas, but it doesn’t explain how its cooking methods changed. Traditional Passover brisket is cooked low and slow with a mix of root vegetables and some kind of assertive sauce (ketchup or soy sauce, usually). If you’re careful and lucky, the brisket comes out moist and fork tender. If you’re not, it comes out dry and overcooked.

My version of Pesach (Hebrew for Passover) brisket came about several years when I literally used nearly every leftover ingredient in my fridge, my spice rack and my liquor cabinet – miraculously, it was supremely delicious! There’s several unusual ingredients in this recipe – leave them out or substitute as you see fit, but the whole recipe as outlined is a symphonic flavor masterpiece that I truly hope you decide to sample! 😀