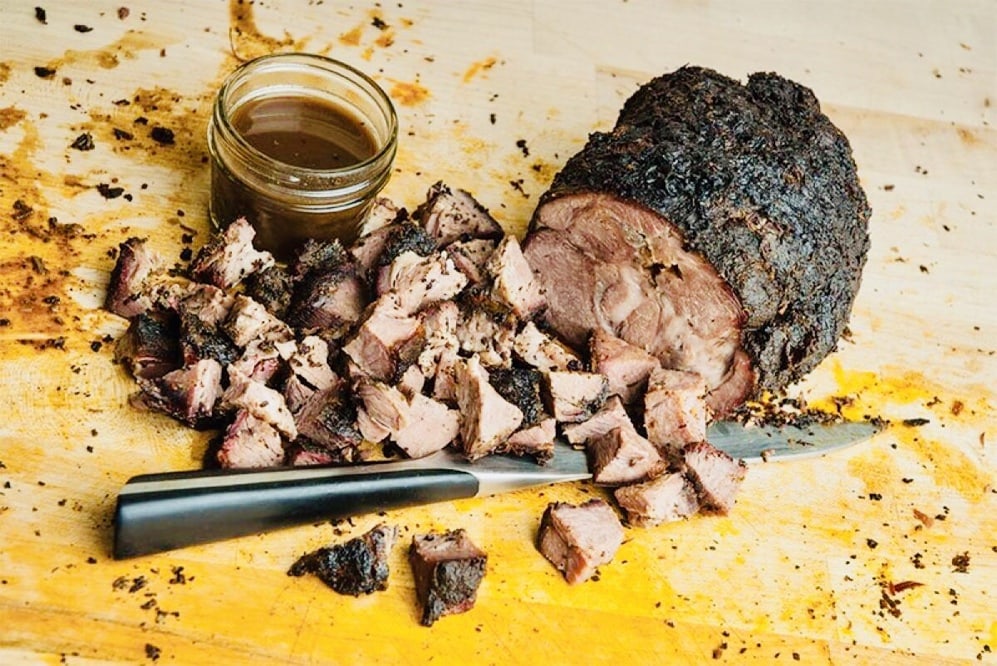 Citizens, your well-seasoned and lightly smoked Leader – the gourmand that is uniquely TFD! – knows an infinite and pure love for all forms of BBQ!

One of my favorite forms of ‘Q is the unique, hyper-local version found only in and around Owensboro, Kentucky. Here, the meat of choice is mutton and the BBQ sauce is black, thin and based on Worcestershire sauce. One of the first recipes I ever posted on TFD was a BBQ sauce with the Owensboro flavor profile. This recipe today, however, is for the real deal!

One of the interesting things about food history is that sometimes, what’s made at homes doesn’t have a fancy product name. It’s only when food writers try to categorize something for comparison that it needs to be identified uniquely.

Owensboro, Kentucky, is a town of about 60,000 in western Kentucky on the banks of the Ohio River, in Daviess County. Originally known as Yellow Banks, it’s named after Abraham Owen, another Kentucky Colonel, who was a legislator and soldier.

This condiment – or more accurately, the marinade – is made to go with what Owensboro is most famous for, their slow –roasted barbecued mutton. Yes, that’s right, not lamb, but gamey-flavored mutton, typically the shoulder. Mutton is actually more accurately called Ewe, which is the female sheep.

The sauce, or ‘dip’ as the locals call it, is designed to cut the gaminess out of mutton. Made with lots of acid and umami, Ownesboro ‘dip’ is typically a Worchestershire and vinegar based marinade (more liquidy, than a typical thick, viscous barbecue sauce).

The dip also has lemon juice (some families use orange juice instead), melted butter, and allspice. The marinade is mopped over the meat as it’s grilled, and served with the barbecued meat to be dipped. Every Owensboro family closely guards their secret dip recipes.

My friend Jerry grew up in Owensboro, and says some of his best memories with his father were manning the mutton grill at their local church’s festival.

He helped with ‘mopping’ the mutton with the black ‘dip’ several times as they grilled. He also was a burgoo runner, the other local dish Owensboro is famous for, a tomato based stew with several meats. The meats are typically chicken, mutton, and beef, mixed with tomatoes, cabbage, potatoes, corn, onion and occasionally, peas, lima beans and other local vegetables like okra.

The first record of a barbecue in Owensboro is July 4, 1834, although it was probably going on way before then. Some families have been barbecuing for five generations, the skills and recipes being passed down from father to son.   When local Whigs in 1844 needed to fundraise for their Kentucky presidential candidate, Henry Clay, they held a barbecue. When Confederate veterans wanted a monument, they held a barbecue.

Jerry talks of grills extending the length of an Olympic sized swimming pool at their church festival, his yearly family reunion (including several hundred cousins), and the annual Mutton Glutton, a barbecue festival held every Mother’s Day Weekend, where 20,000 pounds of ewes are grilled for the event. Barbecued mutton is so popular in Owensboro, that even a single parish festival can attract over 5000 hungry visitors.

Moonlite Barbecue is probably the most well-known restaurant serving the famous mutton in Owensboro, but there are many others. And, you could hit every church festival and family reunion over the summer months and get some outstanding versions too.

As is typical with barbecue, the first recorded ‘professional Owensboro barbecue chef’, Harry S. Green, was a black man, born into slavery in 1855. He began selling his barbecued mutton from his yard at Ninth and Hall Streets, in Owensboro, in 1890.

So why barbecued mutton? There are two stories. One goes that the early Welsh settlers in the area raised enormous flocks of sheep. So it was only natural that if a barbecue was in order, it would be mutton that would be loaded into the spits.

Early agricultural records in 1860 seem to corroborate this – there were recorded 11,000 sheep compared to only 6750 beef cattle in Davies County. Burgoo is said to have been brought to Kentucky by the Welsh. An 1887 article in a local newspaper said burgoo was “a barbecue where birds, chickens, squirrels, beef, pork and dog are thrown in a pot.”

The other story is that barbecued mutton was an acquired taste because mutton was the meat that early Roman Catholic parishioners donated to be used at their local church festivals. Parish picnics at Catholic churches in Daviess County Kentucky date back to at least 1877, when St. Martin Parish in Rome, Kentucky, announced a barbecue picnic fundraiser.

So, if you ever make it to the Mutton Glutton in Owensboro, don’t ask to pass the Black Barbecue Sauce – ask if you can have some dip, and you’ll not seem like such a Yankee.

Citizens, my version of this rarest of rare sauces hews closely to tradition, with a few TFD tweaks. I add a touch of balsamic vinegar, and a bit of mushroom ketchup (an early British precursor sauce to Worcestershire that would have been very familiar to the original Welsh settlers) plus some demiglace in place of butter. My true secret ingredient is a touch of Kentucky orange bitters – it balances all the flavors very nicely indeed!