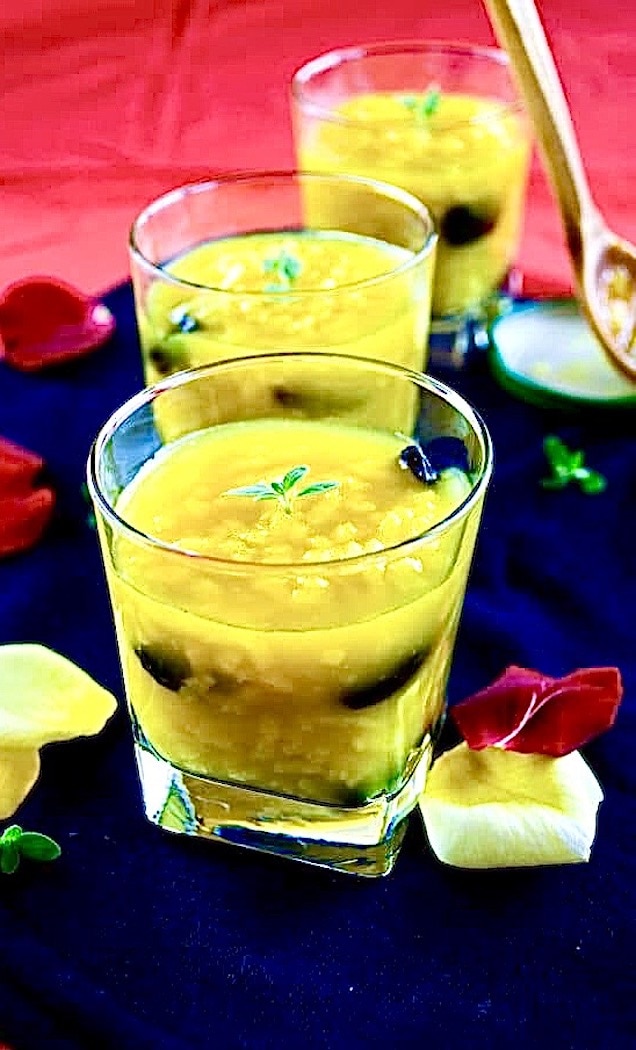 Citizens! As noted in my previous post today, I find that posting here on the blog and sharing my culinary knowledge with TFD Nation helps to keep me on an even keel, thus the reason for 3 posts today! This particular recipe appeals to me as it was served to the Ottoman royalty during the heyday of the Turkish empire – and unlike most recipes of that genre, zerde is surprisingly easy to make! My version contains a unique ingredient that is very germane to my current mental state and treating it – but more on that shortly.

Zerde is a Turkish dessert of repute, a sort of sweet pudding made with fragrant rice that is colored yellow with saffron. It is a festive dish popular at weddings, birth celebrations and during the first ten days of the sacred month of Muharram. Zerd comes from the Persian language word ‘zard’ (زرد) which means yellow.

In Turkey, zerde is very popular in regions where traditionally rice paddy fields are found. In Edirne Province (part of Eastern Thrace, the ‘European’ part of Turkey), which provides almost the half of country’s rice production, zerde is a favored dessert. Did you not realize that a small part of Turkey is actually on the geographic continent of Europe? Then allow the baptismal font of all culinary knowledge to share the benison of the near-infinite information that resides solely within the frontal lobes of TFD!

It accounts for 3% of Turkey’s land area but comprises 14% of the total population. The rest of the country is located on the Anatolian peninsula, geographically in Western Asia. The largest city of the region is Istanbul, which straddles the Bosporus strait between Europe and Asia. East Thrace is of historic importance as it is next to a major sea-based trade corridor and constitutes what remains of the once-vast Ottoman region of Rumelia.

It is currently also of specific geo-strategic importance because the sea corridor, which includes two narrow straits, provides access to the Mediterranean Sea from the Black Sea for the navies of five countries: Russia, Ukraine, Romania, Bulgaria, and Georgia. The region also serves as a future connector of existing Turkish, Bulgarian, and Greek high speed rail networks.

East Thrace includes all in the eastern part of the historical region of Thrace. The area includes all the territories of the Turkish provinces of Edirne, Tekirdağ and Kırklareli, as well as those territories on the European continent of the provinces of Çanakkale and Istanbul. The land borders of East Thrace were defined by the Treaty of Constantinople (1913) and the Bulgarian-Ottoman convention (1915), and were reaffirmed by the Treaty of Lausanne.

Today’s East Thrace is what remains of Turkish Rumelia, which once stretched as far north as Hungary and as far west as Bosnia. Rumelia was lost piecemeal from 1699 onwards, until in 1912 the bulk of it was lost in the First Balkan War. Some small regains were made during the Second Balkan War, giving East Thrace the political borders visible today.

East Thrace was the setting for several important events in both history and legend.

The mass killings and displacement of Thracian Bulgarians in 1913 and the 1923 population exchange between Greece and Turkey ethnically cleansed the Orthodox Christian population of the region.

Zerde, with its expensive and fabulously fragrant ingredients including saffron and rosewater became a favored treat amongst the Ottoman Sultans. Flavoring ingredients of zerde vary slightly from region to region in Turkey depending on the local fruits. Zerde differs from rice pudding insofar as it is prepared with water instead of milk.

The superlative palate of TFD has made 2 important changes to the canonical zerde recipe ingredients:

Firstly, I call for a very rare short grain rice from India known as Ambemohar. Ambemohar is a superlatively fragrant rice variant grown in the foothills of the Western ghats region of the state of Maharashtra in India. The word ‘Ambemohar’ means mango blossom in Marathi language which is spoken in the state of Maharashtra where the cultivar originates from. The cooked rice has a strong aroma reminiscent of mango blossoms and it truly elevates the flavor of the dessert to a whole new plane of existence!

The rare rice has been cultivated in the region for a long time and it is rarely seen or used outside this small geographic region of India. It is a low-yielding rice whose grains are short (5.5 mm) and wide (2.2 mm) compared to the well-known basmati rice. Both varieties have similar degree of fragrance. The variety is therefore included in the class of Aromatic rice such as Basmati. The short cooked grains have a tendency to break easily and stick together, making it ideal for this recipe.

The second change is incredibly controversial – but hear me out before passing judgment on the Imam of Intoxication! I have substituted orange blossom honey for the sugar typically used in this dessert – but that is not the issue at hand. What IS the issue is calling for a small amount per serving of the legendary Turkish ‘mad honey’ that causes you to basically trip out. Since Muslims aren’t allowed to drink wine, this unique food ingredient would have served to intoxicate the Sultan and his guests had they used the ingredient (which they probably did, although perhaps not in this particular recipe).

So what IS mad honey? I’m so glad you asked, Citizen!

Mad honey is an amped-up version of regular honey that is a delightfully unusual amber-red color. It is created by bees who seek out the pollen from the rhododendron flower, which contains psychoactive chemicals and as a result, mad honey has intoxicating properties. This is why it’s also known as hallucinogenic honey, or deli bal honey in Turkey.

Not only is Deli Bal useful for treating a number of conditions, including anxiety, stress, general pain, hypertension, stomach ailments, and migraines, it is renowned for its stimulant properties. A small amount will produce a mild, calming, euphoric sensation, which increases overall feelings of contentedness and relaxation. Villagers in the Black Sea regions of Turkey, where Deli Bal is collected have eaten Mad Honey for thousands of years.

This ingredient is NOT to be trifled with – eating any more than 1 tsp. in a sitting can cause dangerous side effects and could even be lethal in large quantities. I cannot stress strongly enough that you must ensure you keep this jar safely away from children, pets or curious guests – but if you stick to the single tsp. per individual serving, it is safe to consume and offers some pleasant sensations.

Given its potential toxicity, it is imperative that the company bottling mad honey test it thoroughly to make sure the chemicals responsible for its effects are standardized and at a consistent level to avoid accidental overindulgence. My preferred vendor does this and you can thus buy safe mad honey from my suggested source. If you are at all concerned about using this ingredient, you can easily leave it out and replace it with the same amount of orange blossom honey (although if you do this, the name will need to be changed as it is no longer intoxicating!).

You can buy the rare ambemohar rice from here, top-quality Afghani saffron from here, properly-tested mad honey from here, and my preferred brand of rosewater from here.

Citizens, zerde is a rare and royal recipe indeed, with a pedigree dating back thousands of years – I hope you see fit to try my heterodoxical yet still traditional variant at your earliest convenience! You might consider serving this as part of a full-on Ottoman meal, along with this delicious main course.