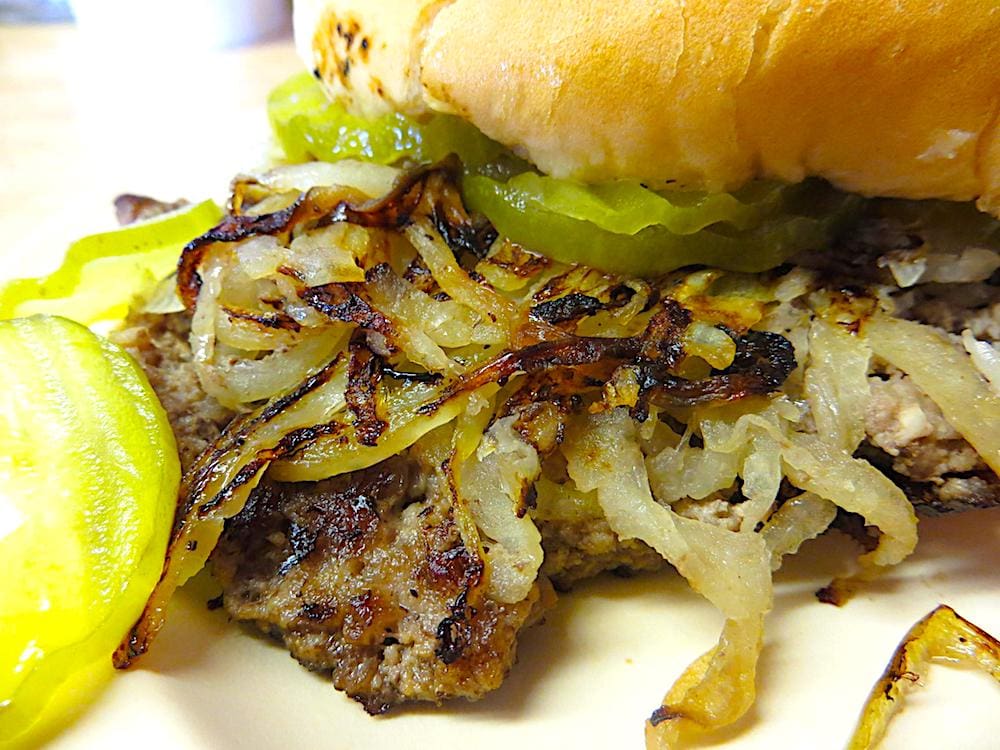 My Citizens, a dear friend of mine who grew up in Oklahoma requested this Sooner State original recipe – Sonny, this one is for you, my man! 😀

In case you ever wondered where that name “Sooner” came from:

In 1889, people poured into central Oklahoma to stake their claims to nearly 2 million acres opened for settlement by the U.S. government. Those who entered the region before the land run’s designated starting time, at noon on April 22, 1889, were dubbed “sooners.”

Now, as to the origins of this particular and delicious burger:

Once called a Depression burger, the fried onion burger is a pungent bite of the history and cultural makeup that define Oklahoma and the West.

The air inside Sid’s Diner tingles sweet and pungent. The source? The restaurant’s famed fried onion burgers cooked on the salt pork-seasoned grill, an Oklahoma specialty whose epicenter is a network of two Sooner State towns: Ardmore (along Interstate 35) and El Reno (along Route 66). According to one legend, it was in 1926 at the latter burg’s now-shuttered Hamburger Inn that ribbons of caramelized onions were first smashed into a griddling beef patty.

At the time they were called Depression burgers, says Adam Hall, who along with his wife, mother, and father, Marty, works at and runs the family restaurant. Established in 1967 and named in honor of Marty Hall’s father, Sid, the restaurant has been in its current location for 30 years.

“During the Depression, hamburger meat was really expensive,” Hall says, “and they had to find a way to ration the meat.” The inclusion of onions stretched out the amount of protein available for serving in those lean years. “[The fried onion burger recipe] has since been passed down generation to generation, and we still have the burgers today.”

Of course there’s more than one creation story — such is the way of food. Another tale claims the onion burger was first served in the pre-boom postwar years. Whichever is true, one thing is certain: It’s not first-date material; the patty of beef and allium is an all-in order. The dish carries the weight of struggle and sacrifice of a people who came out of the 20th century triumphant and proud. The onion burger is a bite of the history and cultural makeup that define Oklahoma and the West.

The key to this simple burger is three-fold – the holy trinity of meat, the onions and the bun. For the meat, don’t use anything but 70/30 (lean to fat ratio) – I dare to use my own special blend of round (or chuck) for the lean and – wait for it – BACON trimmings!!! – for the fat. Your butcher can easily grind this for you – it is the ULTIMATE burger meat!!!

For the onions – they MUST be sliced paper-thin. Use a mandoline or this much cheaper but still awesome Japanese benriner for the task – nothing else will do!

The buns – I insist on Oroweat Country Potato Buns. Toasted as the original calls for or untoasted as I prefer – your call.

I add in my secret ingredient – a seasoning blend from one state south (Bolner’s Fiesta Extra Fancy Uncle Chris Steak Seasoning from Texas) that goes way past salt and pepper to make these beauties really sing! The dill pickles (and there MUST be dill pickles slices!) are from my fave brand and don’t even think of using ketchup – only French’s yellow mustard! You could – if you like – add a slice of Velveeta cheese to these, but this is a rare time when I prefer my burger sans fromage.

Try them just once and I guarantee you’ll be hooked – Sooners, I think you’ll approve of my version most stridently. 🙂