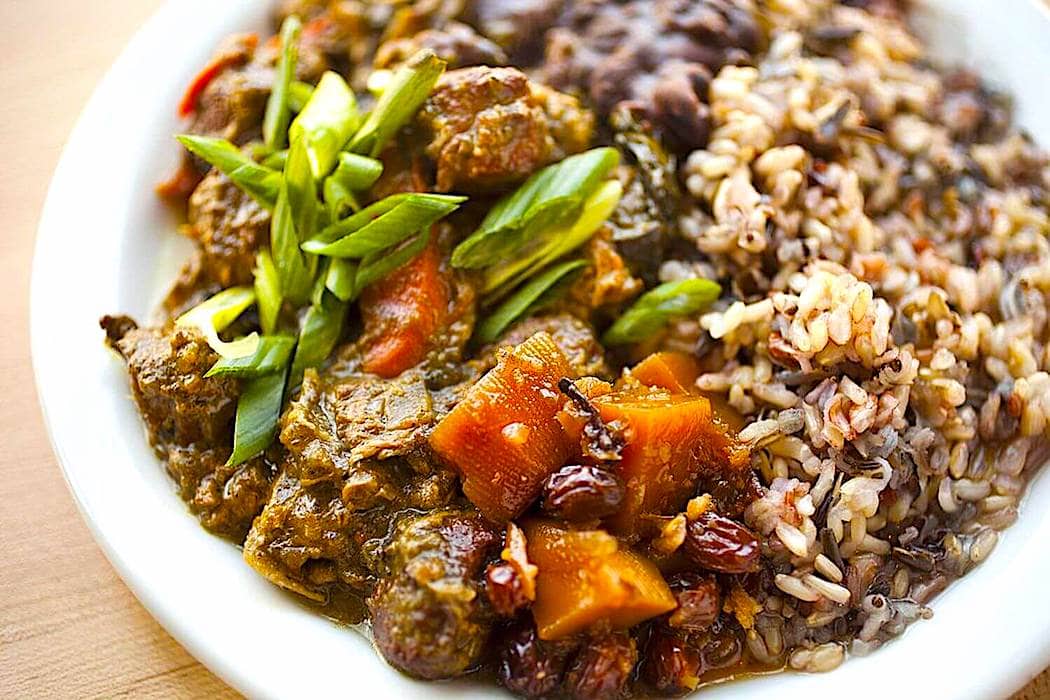 Citizens! Memorial Day has come and gone, but that does not mean we should just put those who made the supreme sacrifice for their country out of sight and mind – and it is for this reason I am choosing to share a recipe today that honors one of the least recognized groups of veterans out there. I speak of no one less than the Native Americans who put aside centuries of justified distrust of the Europeans who stole their land and instead fought to serve the country that has treated them far less than respectfully throughout our history.

In the case of this post and its context, I wanted to celebrate all-American ingredients – specifically those native only to our shores and utilized by Native American Nations for millennia. In this case, I am focusing on the Minnesota-based Ojibwe and a venison stew I would like to think they could have made using their foraged bounty.

First, let us focus on the Native American contributions to the safety and protection of our beloved Nation – I quote liberally from this excellent article from https://americanindian.si.edu/nnavm/heroes/:

Beginning in the late 1800s, Native American children were forcibly placed into government- and church-sponsored boarding schools with the goal of destroying their culture. Despite the governments’ attempts to eliminate indigenous languages, those languages survived and became crucial to the Allied cause. Late in World War I, the military realized the usefulness of indigenous languages in wartime communication.

They assembled what were called telephone squads, groups of Native soldiers who used their languages to create coded messages. During World War II, the United States formalized the use of Native languages, asking soldiers of many different tribal nations to work as cryptologists who developed secret battle communications based on their languages—and America’s enemies never deciphered the coded messages they sent.

Code Talkers, as they were known after World War II, are twentieth-century American Indian heroes who significantly aided the victories of the United States and its allies.

The story of these brave intelligencers is told in the National Museum of the American Indian’s traveling exhibition, Native Words, Native Warriors. Its online companion includes reflections in their own words and supplements for educators to use in the classroom. Expanding on this legacy of service, the national memorial’s complementary traveling exhibition, Patriot Nations: Native Americans in Our Nation’s Armed Forces, will bring to light the dedication of all Native Americans who have served.

As to the history of the Ojibwe tribe:

The Ojibwe, Ojibwa, Chippewa, or Saulteaux are an Anishinaabe people of Canada and the northern Midwestern United States. They are one of the most numerous indigenous peoples north of the Rio Grande. In Canada, they are the second-largest First Nations population, surpassed only by the Cree. In the United States, they have the fifth-largest population among Native American peoples, surpassed in number only by the Navajo, Cherokee, Choctaw and Sioux.

The Ojibwe people traditionally speak the Ojibwe language, a branch of the Algonquian language family. They are part of the Council of Three Fires and the Anishinaabeg, which include the Algonquin, Nipissing, Oji-Cree, Odawa and the Potawatomi. Historically, through the Saulteaux branch, they were a part of the Iron Confederacy, joining the Cree, Assiniboine, and Metis. The majority of the Ojibwe people live in the United States. There are 77,940 mainline Ojibwe; 76,760 Saulteaux; and 8,770 Mississauga, organized in 125 bands. They live from western Quebec to eastern British Columbia. As of 2010, Ojibwe in the U.S. census population is 170,742.

The Ojibwe are known for their birch bark canoes, birch bark scrolls, mining and trade in copper, as well as their cultivation of wild rice and maple syrup. Their Midewiwin Society is well respected as the keeper of detailed and complex scrolls of events, oral history, songs, maps, memories, stories, geometry, and mathematics. The Ojibwe people underwent colonization by European-descended Canadians. They signed treaties with settler leaders, and many European settlers inhabited the Ojibwe ancestral lands.

Ojibwemowin is the fourth-most spoken Native language in North America after Navajo, Cree, and Inuktitut. Many decades of fur trading with the French established the language as one of the key trade languages of the Great Lakes and the northern Great Plains. The popularity of the epic poem The Song of Hiawatha, written by Henry Wadsworth Longfellow in 1855, publicized the Ojibwe culture. The epic contains many toponyms that originate from Ojibwe words.

The Ojibwe live in groups (otherwise known as “bands”). Most Ojibwe, except for the Great Plains bands, lived a sedentary lifestyle, engaging in fishing and hunting to supplement the women’s cultivation of numerous varieties of maize and squash, and the harvesting of manoomin (wild rice). Their typical dwelling was the wiigiwaam (wigwam), built either as a waginogaan (domed-lodge) or as a nasawa’ogaan (pointed-lodge), made of birch bark, juniper bark and willow saplings.

They developed a form of pictorial writing, used in religious rites of the Midewiwin and recorded on birch bark scrolls and possibly on rock. The many complex pictures on the sacred scrolls communicate much historical, geometrical, and mathematical knowledge. The use of petroforms, petroglyphs, and pictographs was common throughout the Ojibwe traditional territories. Petroforms and medicine wheels were a way to teach the important concepts of four directions and astronomical observations about the seasons, and to use as a memorizing tool for certain stories and beliefs.

During the summer months, the people attend jiingotamog for the spiritual and niimi’idimaa for a social gathering (pow-wows or “pau waus”) at various reservations in the Anishinaabe-Aki (Anishinaabe Country). Many people still follow the traditional ways of harvesting wild rice, picking berries, hunting, making medicines, and making maple sugar. Many of the Ojibwe take part in sun dance ceremonies across the continent. The sacred scrolls are kept hidden away until those who are worthy and respect them are given permission to see and interpret them properly.

There is renewed interest in nutritious eating among the Ojibwe, who have been expanding community gardens in food deserts, and have started a mobile kitchen to teach their communities about nutritious food preparation. The traditional Native American diet was seasonally dependent on hunting, fishing and the foraging and farming of produce and grains. The modern diet has substituted some other types of food like frybread and “Indian tacos” in place of these traditionally prepared meals.

The Native Americans loss of connection to their culture is part of the “quest to reconnect to their food traditions” sparking an interest in traditional ingredients like wild rice, that is the official state grain of Minnesota and was part of the pre-colonial diet of the Objibwe. Other staple foods of the Objibwe were fish, maple sugar, venison and corn. They grew beans, squash, corn and potatoes and foraged for blueberries, blackberries, choke cherries, raspberries, gooseberries and huckleberries. During the summer game animals like deer, beaver, moose, goose, duck, rabbits and bear were hunted.

One traditional method of making granulated sugar known among the Anishinable was to boil maple syrup until reduced and pour into a trough, where the rapidly cooling syrup was quickly processed into maple sugar using wooden paddles.

Citizens, I urge you to pay homage to those Native Americans who have gone so far out of their way to pay service to a country that has – mostly – treated them like total garbage, and that you find this celebration of our wild American game and produce to be s worthy addition to your dinner repertoire! 😀 You would also enjoy this dinner recipe with another Native American recipe for berry-studded corn bread, found here.