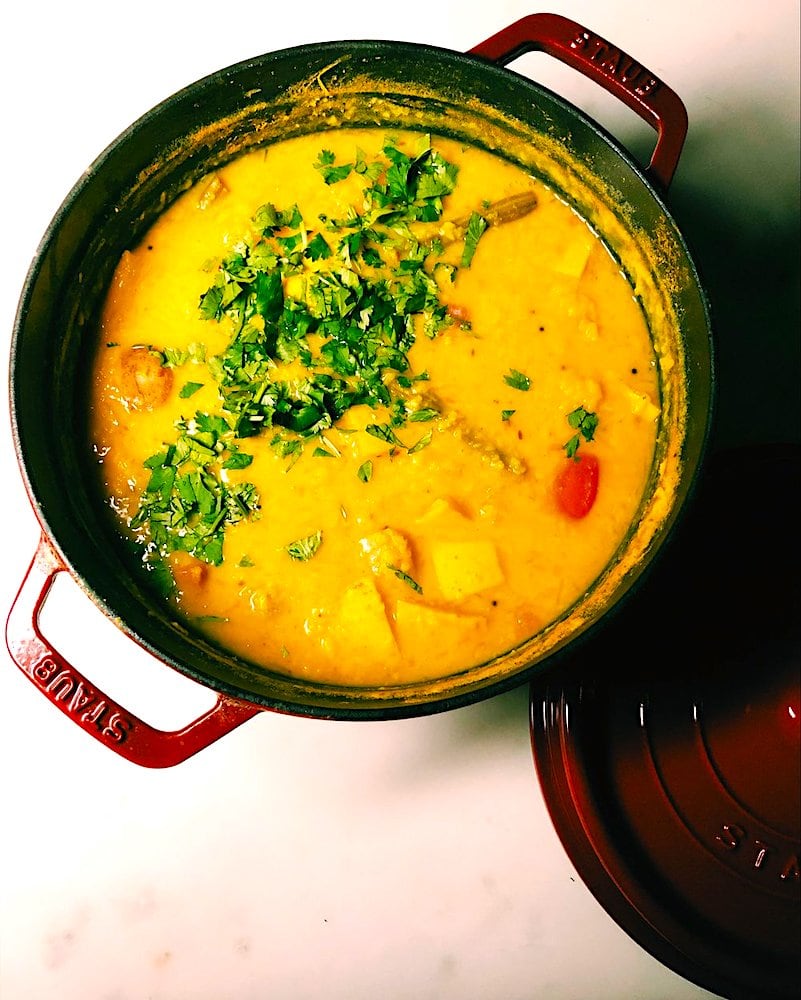 Citizens, we are closing out our culinary tour through India today with a complexly-spiced vegetarian recipe from one of the least-known states of the country, at least from outside India!

Odisha (Odia: ଓଡ଼ିଶା), also known as Orissa, is a state of India, located on the east coast of India, by the Bay of Bengal, where it has a relatively unindented coastline (about 480 km long). It is the modern name of the ancient nation of Kalinga, which was invaded by the Maurya Emperor Ashoka in 261 BC. The modern state of Odisha was established on April 1, 1936 at Kanika Palace, Cuttack, as a province in India, and consists predominantly of Odia speakers.

April 1 is therefore celebrated as Utkal Divas (Odisha Day). Odisha is the ninth-largest state by area in India, and the eleventh-largest by population. Odia is the official and most widely spoken language with 93.33% Odia speakers according to the last linguistic survey.

The narrow, level coastal strip, including the Mahanadi River delta supports the bulk of the population. The interior of the state is mountainous and sparsely populated. Odisha is sadly subject to intense cyclones. The most intense one, in October 1999 caused severe damage and more than 10,000 deaths.

Odisha is home to the Hirakud Dam, near Sambalpur – the longest earthen dam in the world. Odisha has several very popular tourist destinations. Puri, Konark & Bhubaneswar are known as the “Golden triangle” of eastern India.

The Jagannath Temple of Puri, the Konark Sun Temple, the Lingaraj Temple, Udayagiri and Khandagiri Caves, Dhauligiri of Bhubaneshwar, Ashoka’s famous Rock Edict at Jaugada near Berhampur city and the Barabati Fort of Cuttack are all incredibly important in the archaeological history of India.

Puri, with the Shri Jagannath temple near the sea (famous for Rath Yatra or the Car Festival), and Konark, with the Sun Temple, are visited by thousands of tourists every year.

Odisha has a culinary tradition spanning centuries. The kitchen of the Shri Jagannath Temple is reputed to be the largest in the world, with 1,000 chefs working around 752 wood-burning clay hearths called chulas, to feed over 10,000 people each day.

Compared to other regional Indian cuisines, Odia cuisine (Odia: ଓଡ଼ିଆ ଖାଦ୍ୟ) uses less oil and is less spicy while nonetheless remaining flavorful. Rice is the staple food of this region. Mustard oil is used in some dishes as the cooking medium, but ghee (made of cow’s milk) is preferred in temples. In olden times, food was traditionally served on banana leaves or disposable plates made of sal leaves.

Odia cooks, particularly from the Puri region, were much sought after due to their ability to cook food in accordance with Hindu scriptures. During the 19th century, many Odia cooks were employed in Bengal and they took many Odia dishes with them. This period also saw a heavy demand for Brahmin cooks, leading many Odia cooks to fake their castes.

Some primary ingredients used in Odia cuisine are plantains, jackfruit, and papaya. The curries are frequently garnished with dried raw mango (ambula).

Panch phutana is a blend of five seed-based spices that is widely used in Odia cuisine – panch is the number 5. Garlic, onion and ginger are used in most of the secular food. Temple food preparation, however, doesn’t allow the use of garlic or onion. Turmeric and red chilies are used regularly.

Temples in the region make offerings to the presiding deities. The prasada of the Jagannath Temple is well known and is specifically called Maha Prasad meaning greatest of all prasadas. It consists of 56 recipes, so it is called chhapan bhoga. It is based on the legend that Krishna missed his eight meals for seven days trying to save a village from a storm, while holding up the Govardhan hill as a shelter.

One of the most famous dishes of the region is called Dalma – a dish made from dal and vegetables. It is generally made from toor dal and contains chopped vegetables such as papaya, banana, eggplant, pumpkin, gourd, etc. It is garnished with turmeric, mustard seeds, and panch phutana. There are several variations of this dish – this is My version and I truly hope you enjoy it, Citizens!

Some of the more unusual ingredients such as cinnamon leaf, tur dal, black cumin seeds, black cardamom, Kashmiri chili powder, dried coconut and chana dal can be purchased from their respective links.

() My glorious Citizens – today, the Dragoon of Dragons – YOUR TFD! – will be leading you to one of My favorite places on the planet – the Land of Castles, home of the Red Dragon of the British Isles and the ancestral home to King Arthur Himself! Yes, I speak of Cymru, Cambria…