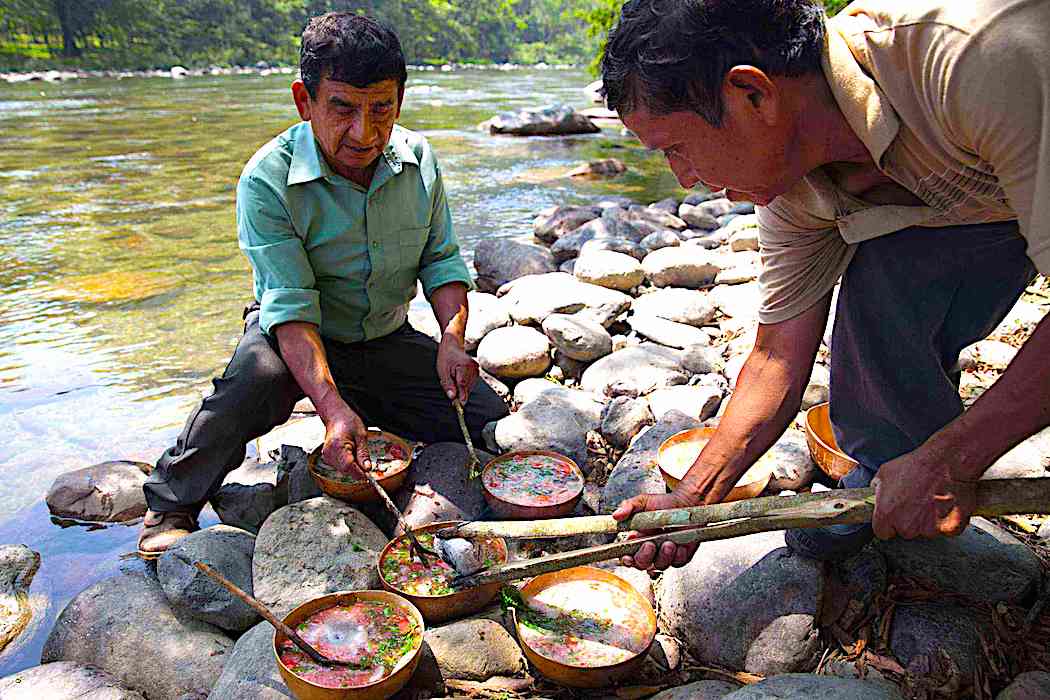 Citizens, all of you have displayed admirable civic duty in becoming members of TFD Nation, and I – the hoary Hierarch of History, YOUR TFD! – am beyond thankful for your continued support (especially those of you have stepped up to give $4 a month to become Citizens Prime – details are here if you wish to join their exalted ranks!).

What you may not know is that while TFD is more than 5 years old now, it is not my first recipe rodeo – in fact, the first foray of my online culinary posting was actually in a private forum I started for my synagogue exactly 18 years and 1 day ago! My first-ever post was the famous Jewish fable – the recipe for ‘stone soup’ and I wish to share it with you now, as I will in fact be giving you a REAL recipe for stone soup in this very post!

If you are curious about why the forums were created, this midrash (fable) may help…
l’chaim and enjoy!
_____________________________Once upon a time, somewhere in Eastern Europe, there was a great famine that laid waste to the land. People began to jealously hoard whatever food they could find, hiding it even from their friends and neighbors. One day, an old man drove his wagon into a village and began asking questions as if he planned to stay for the night.

“There’s not a bite to eat anywhere in the whole province,” he was told. “Better to keep moving on.”

“Oh, I have everything I need in that regard,” he said. “In fact, I was thinking of making some soup to share with all of you.” With that, he pulled an iron cauldron from his wagon, filled it with water, and built a fire under it – and the rumor of food spread like wildfire among the villagers. By the time he was finished, the whole village was crowding about the square or watching from their windows, together for the first time in ages.

Then in front of that roaring fire, and the iron cauldron filled to the brim with water, in the presence of the whole village, he drew forth a velvet bag. With great ceremony, he opened it and to the astonishment of the entire congregation of villagers, produced…an ordinary looking stone and dropped it into the water.

As he stirred the huge pot, the villagers were convinced the man was indeed insane. However, as the man sniffed the “broth” and licked his lips in anticipation, hunger slowly began to overcome the villagers skepticism.

“Ahhh,” the man said to himself rather loudly (age had obviously affected his hearing). “I do enjoy a tasty stone soup – truly there is no finer and more savory delight to be found on our Lord’s earth! That heavenly aroma – that savory taste of paradise itself! Of course, stone soup with cabbage – now THAT’S hard to beat…”

There was a deafening silence – and then, breaking ranks from the crowd, a villager approached hesitantly, looked around, and pulled a small cabbage from under his coat. When he discreetly added it to the pot, the peddler beamed. “”Excellent!” he cried, “You know, I once had stone soup with cabbage and a little morsel of beef as well, and it was the taste of manna in the desert to the starving Israelites…””

Then it was the village butcher who approached. He had a little piece of beef hidden under his apron. And so it went – with villagers slowly – and then earnestly – providing what they had hidden. Some potatoes, some onions, carrots, herbs, mushrooms, and so on and on and on until at last there was, indeed, a delicious meal for all.

From that time on, long after the famine had ended, the villagers reminisced about the finest soup they’d ever had…

The idea of course is that EVERYBODY in a community must contribute if the community is to thrive – and there again, is that gentle reminder about becoming a Citizen Prime… 😉

However, all that said – it turns out that while stone soup is a fable, in Mexico it’s a real recipe with a fascinating backstory! It’s also not the only recipe I know that calls for cooking with cracking-hot stones – this one from Mongolia is another example.

The people primarily live in 17 municipalities in Oaxaca and continue to speak their native language. Chinantecos call themselves “tsa ju jmí”, which means “people of ancient word” and maintain a great attachment to nature and the elements of fire, water, air, and earth.

Fodors.com elucidates in great detail how this all got started:

One story goes that hundreds or even thousands of years ago, well before the arrival of the Spanish conquistadors, Chinantec villagers from the remote Oaxacan hamlet of San Felipe Usila would load up canoes with items to sell in Tuxtepec, the market town a several-day journey downriver. On the way, they would camp on the shores of the Papaloapan river and make soup. But not just any soup: a soup that would become legend.

Spicy, smoky, savory and tinged with mineral notes from the stones, it’s intoxicatingly delicious. The travelers used whatever was within reach: river water for the broth; fresh-caught fish and shrimp; tomatoes, onions, chiles, and herbs growing nearby; orangewood for the bonfire; and jicara, or gourds picked from nearby calabash trees, which, when hollowed out and dried, made perfect soup bowls. And the final ingredient? A special kind of white river stone that’s particularly good at conducting heat. When super-heated by the flames and dropped carefully into the gourds with all the other ingredients, the rocks boil the river water in minutes, cooking the fish perfectly and sending the heady aroma of garlic, cilantro, and chiles wafting downstream.

That’s how caldo de piedra (literally, stone soup) earned its name. Though its true origins are vague and hard to document precisely, it’s said that the soup is traditionally made by Chinantec men as a tribute to the village’s women and children. Today, caldo de piedra is a study in cultural and ecological change: Instead of fishing for tilapia in the river, Usileños now drive to the next town to purchase fish (or farm their own), since the construction of a nearby dam in the 1990s decimated their local supply. Families lug five-gallon bottles of purified water to the riverbank, fearing that the river water is no longer clean enough to cook with.

Women increasingly participate in the preparation of the soup too, and the vegetables—typically stone-ground by hand—are now often mixed with the help of modern conveniences like blenders and graters.

When friends and family come back home to visit, residents say the shores of the river are lined with families who spend hours preparing and consuming the soup.
And yet, the soup remains a fundamental part of village life, used to bring families together on Sundays and holidays. Spicy, smoky, savory and tinged with mineral notes from the stones, it’s intoxicatingly delicious.

Intrepid travelers can travel to San Felipe Usila to sample the soup themselves, but getting there requires a mountainous 12-hour drive from Oaxaca City on roads that are only occasionally paved.

My version of this dish hews closely to ancient tradition – I’ve barely made any changes to this classic recipe, except in the amounts of seasonings. This is a true showcase recipe and is in fact not hard to make at all and is supremely delicious! I urge you to try it at your earliest convenience, my Citizens! You can buy fresh epazote here, it is far superior to the dried form, at least for this recipe. This would be an extraordinary and dramatic opening to a rustic Mexican meal, and I would recommend serving some classic black molé as an apropos Oaxacan main course.