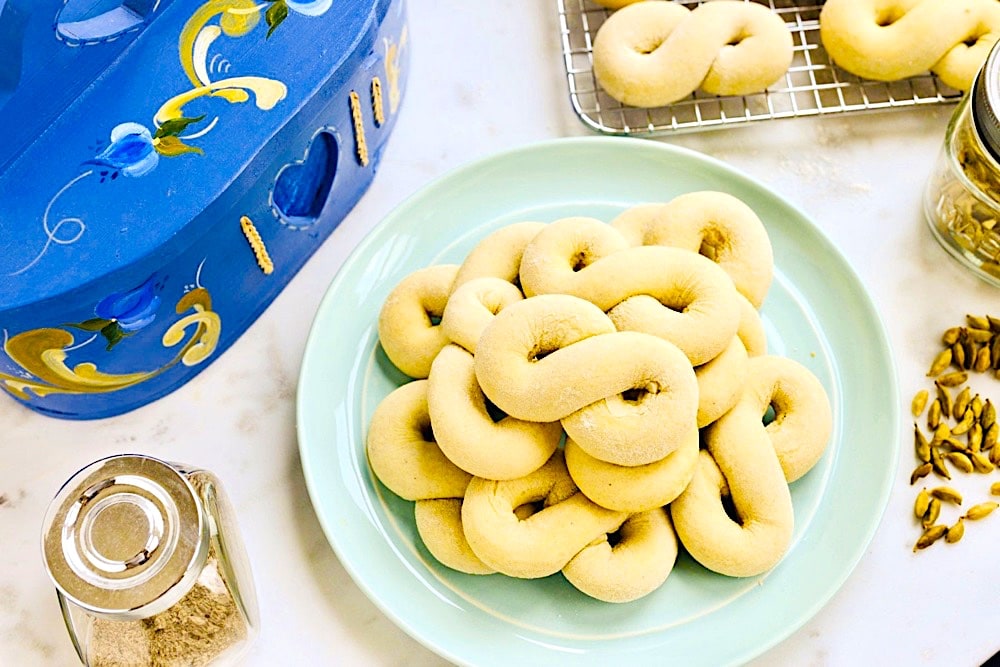 Citizens, the Christmas season is firmly upon us and I would love to share with you a recipe that defines the holiday in Norway – kringla!

The beloved Norwegian kringla, or kringle, is a pastry that has its origin with Roman Catholic Monks who arrived in Norway in the 13th Century. It is a soft, fragile cookie with a rich buttery flavor and a hint of sweetness.

Baker’s guilds in Europe have used the kringle or pretzel as a symbol for centuries. It is told (but currently unconfirmed by historic documents), that when Vienna was besieged by the Turkish Ottoman armies in 1529, local bakers working in the night gave the city defence an early warning of the attacking enemy. For this, they were later rewarded by the Pope, with permission to use a crown as part of their kringle guild symbol.

For unknown reasons, the guild in Denmark is now the only baker’s guild in the world with official authority to display a royal crown as part of their baker’s guild trade symbol that is often hung outside of bakery shops.

Uniquely amongst the Nordic nations, Norwegian kringla are shaped as a figure 8, as opposed to the classic pretzel shape. TFD prefers this both for its relative simplicity and the fact they look like an infinity symbol when properly made!

The infinity symbol ∞ (sometimes called the lemniscate) is a mathematical symbol representing the concept of infinity.

The shape of a sideways figure eight has a long pedigree; for instance, it appears in the cross of Saint Boniface, wrapped around the bars of a Latin cross. However, John Wallis is credited with introducing the infinity symbol with its mathematical meaning in 1655, in his De sectionibus conicis. Wallis did not explain his choice of this symbol, but it has been conjectured to be a variant form of a Roman numeral for 1,000 (originally CIƆ, also CƆ), which was sometimes used to mean “many”, or of the Greek letter ω (omega), the last letter in the Greek alphabet.

The infinity symbol may also be used to represent a point at infinity, especially when there is only one such point under consideration. In areas other than mathematics, the infinity symbol may take on other related meanings; for instance, it has been used in bookbinding to indicate that a book is printed on acid-free paper and will therefore be long-lasting.

The infinity symbol appears on several cards of the Rider–Waite tarot deck, the standard for tarot readings.

In modern mysticism, the infinity symbol has become identified with a variation of the ouroboros, an ancient image of a snake eating its own tail that has also come to symbolize the infinite, and the ouroboros is sometimes drawn in figure-eight form to reflect this identification, rather than in its more traditional circular form.

Back to kringla now – my version of these delicious soft cookies includes a bit of vanilla paste (stronger than vanilla extract, buy it here) and cardamom, both classic flavors in Scandinavian desserts!

I hope you enjoy these as much as I do, !