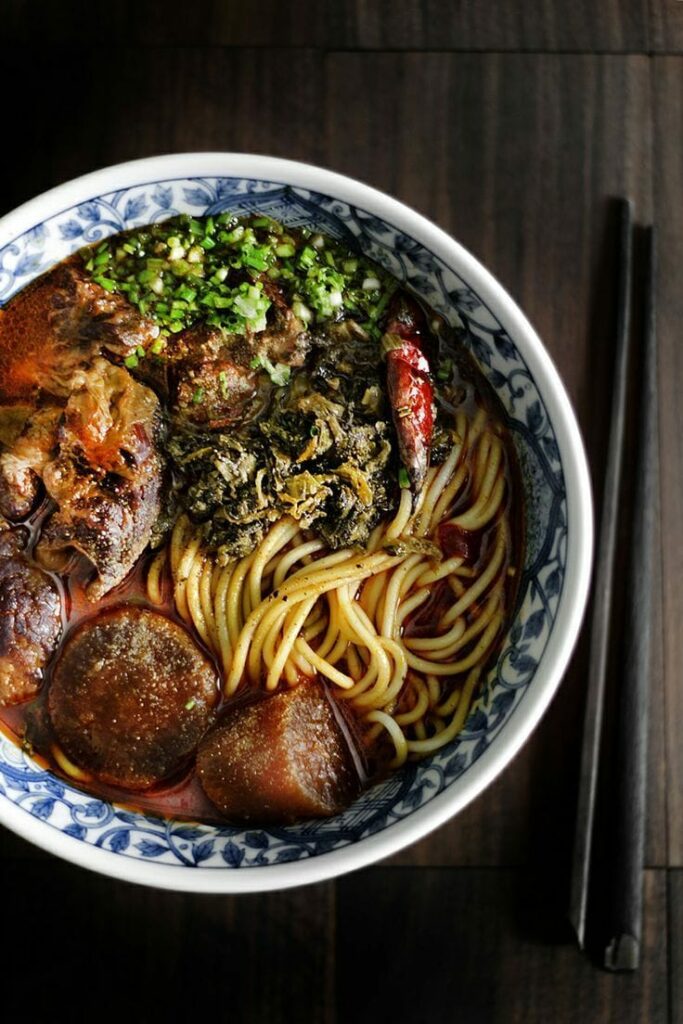 Picture used under Creative Commons License from the excellent blog at www.ladyandpups.com

Citizens! This recipe is pretty much the national dish of Taiwan – and who wouldn’t love a spicy beef noodle soup?! There are annual competitions in Taipei for who can make the best Niu Rou Mien – I’d like to think mine would at least place amongst these masters. 🙂

Given that we are now officially in Winter in the Northern Hemisphere, this seemed like a very appropriate recipe to kick off the blog with. It’s authentic to its roots but modified just enough to make it revolutionary and unique (as well as supremely delicious!). It is also a rarely-known dish outside Taiwan and that needs to be changed ASAP.

It is believed that that the origins of niu rou mien started with Chinese soldiers who fled to the island in 1949. They made a beef soup with the spicy bean paste (that definitely originates from the Sichuan province) and soy sauce, and served it with noodles.

It is sometimes considered a national dish and every year Taipei holds an annual Beef Noodle Festival, where various chefs and restaurants compete for the title of the “best beef noodles”.

Due to influences from the influx of immigrants from mainland China in the early 1900s, the Taiwanese version of beef noodle soup is now one of the most popular dishes in the country.

In Chinese, “牛肉麵” literally means “beef noodles”. Mainland Chinese and Hong Kong restaurants may have a tendency to distinguish between “牛肉麵” “beef noodles” and “牛腩麵” “beef brisket noodles”, with the former containing either beef shank or beef slices and the latter containing only brisket. It is sometimes served with wontons.

In Taiwan, “牛肉麵” typically consists of either brisket or shank only, though many restaurants also have tendon or a more expensive option with both meat and tendon (Chinese: 半筋半肉麵; lit.: ‘half tendon half meat noodle’) and occasionally with tripe; 三寶麵; ‘three-treasure noodle’, usually denotes a bowl containing all three.

If one orders “牛肉湯麵” or “beef soup noodles” in a restaurant in Taiwan, Mainland China or Hong Kong, they might be given a cheaper bowl of noodles in only beef broth but no beef. If one orders a “牛肉湯” or “beef-soup”, they could be given a more expensive bowl of beef broth with chunks of beef in it but without noodles.

As noted in a an article from the Wall Street Journal:

This is a dish with roots in the Chinese mainland that has evolved into a local Taiwanese specialty. Li Ang, one of Taiwan’s most celebrated novelists and a festival judge, says there is no direct equivalent in mainland China.

“After 1949, many (people) from the mainland, especially from Sichuan, arrived in Taiwan and soon became homesick,” she says, referring to the nearly two million people who moved to the island after Mao Zedong’s Communists defeated the Kuomintang.

“To recreate the tastes they left behind they would braise the beef in dark soy sauce, adding noodles and a spicy soup. These are the origins of what will then evolve into our niu rou mian.”

Initially, the dish was associated with the mainland. For centuries Taiwan had observed a taboo about eating beef. A cow “was considered an animal that works for us, and to kill it for its meat was considered like killing a friend for its flesh,” says Ms. Li, adding that the people who introduced the Taiwanese to beef-eating were actually the Japanese, who ruled the island from 1895 until the end of World War II.

This isn’t a “short-cut” soup by any means – but this Taiwanese classic will reward your labor with the soul-warming essence of spicy beef goodness. It truly is one of the great, soul-warming soups in the recipe canon and I hope you try it forthwith!

Battle on – The Generalissimo!