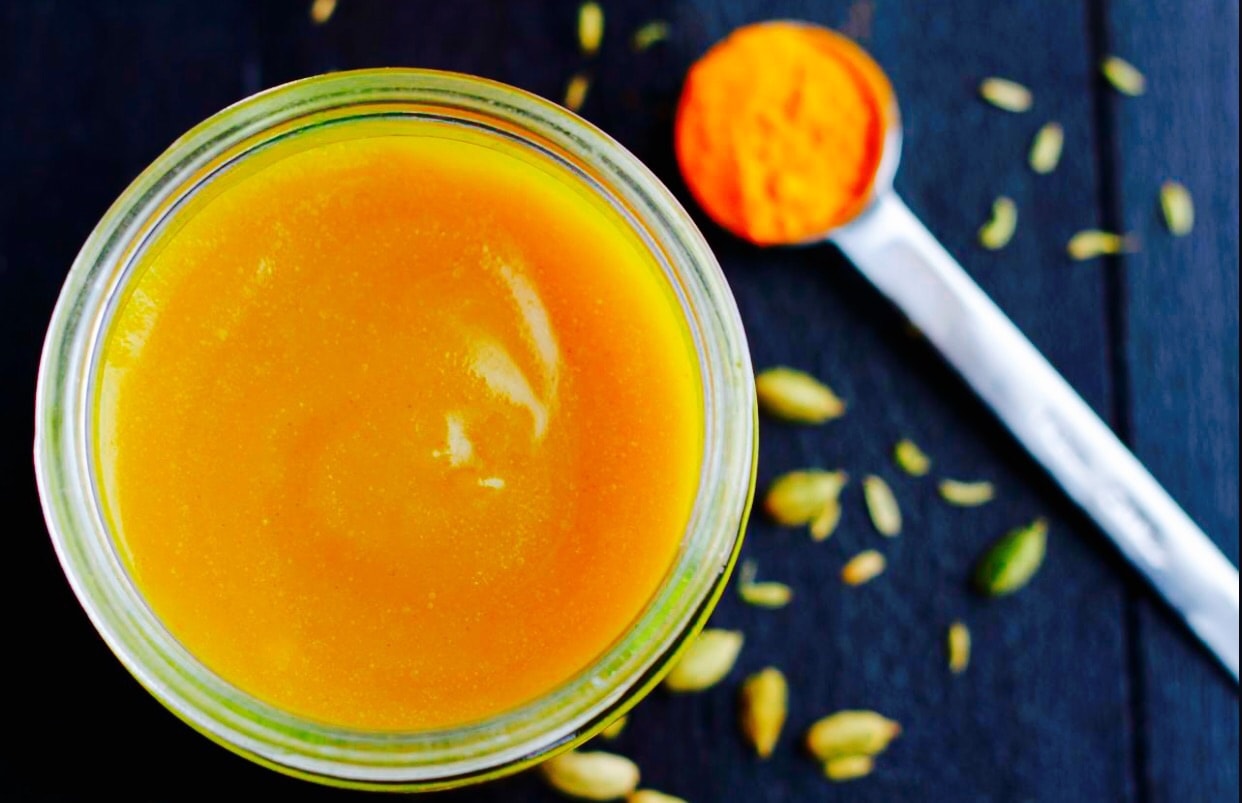 Citizens, Ethiopian food has slowly gained more popularity in the United States and remains one of my all-time favorite cuisines.

Combining a rarefied understanding of spice blends, Ethiopian food is a magnificent melting pot of African, Indian and Arabian influences that is well worth seeking out. It is now possible to find Ethiopian restaurants in most major metro areas in the United States and I hope you choose to seek them out!

Ethiopians are very fond of Niter Kibbeh, which is basically clarified butter infused with herbs and spices. Everyone in Ethiopia has their own version of this recipe – this is mine and it is relentlessly authentic.

Its preparation is similar to that of ghee, but niter kibbeh is simmered with spices such as koseret, fenugreek, cumin, coriander, turmeric, cardamom, cinnamon, or nutmeg before straining, imparting a distinct, spicy aroma. The version using vegetable oil instead of butter is called “yeqimem zeyet”.

By cooking the butter along with these various spices, the resulting stable oil becomes an absolutely essential flavoring ingredient throughout the cuisine.

Remember that during fast days this ingredient could not be used.  As a result, Ethiopians also make a vegan version based upon vegetable oils such as Niger Seed, which was initially domesticated in the highlands, or various mustards.

Houston’s newer Ethiopian restaurant Lucy is looking to change this perception by offering inexpensive, accessible food in a modern, attractive setting. Even its name calls attention to the positive aspects of Ethiopia, which is where the 3.2 million year-old skeletal remains of Lucy — an Australopithecus afarensis and one of our earliest ancestors — was found.

The rest of the world is slowly discovering Ethiopian food too, thanks in no small part to people like Marcus Samuelsson, the Ethiopian-born, Swedish-raised chef who owns the renowned Red Rooster in Harlem and to the large Ethiopian diaspora in cities such as Washington D.C., where the cuisine is as popular as Indian food is in Houston.

You’ll notice that there’s no pork or shellfish of any kind served in Ethiopian restaurants. This is due to the major religions that have influenced the country over thousands of years: Judaism, Islam and Orthodox Christianity. Yes — Christianity. The Kingdom of Aksum, now known as Ethiopia and Eritrea, was one of the first Christian countries in the world, having officially adopted Christianity in the 4th century. Today, nearly 50 percent of Ethiopians identify as Orthodox Christians, while 34 percent are Muslim and 19 percent are Protestant.

This also means that you will find stimulants in Ethiopian restaurants, in particular coffee and alcohol. And if you look around, you’ll probably also find at least one icon of Saint George slaying a dragon. Ethiopia shares this patron saint with Greece, and it’s just one reminder that the country has shared such a fascinating history with Western culture over the years.

Citizens, feel free to modify or leave out ingredients in your version of niter kibbeh, as you see fit, just as the Ethiopians would. Use it anywhere in savory recipes you would butter and set your taste buds to DEFCON 3. 🙂 You can buy the rare Ethiopian spices for niter kibbeh at Brundo, the premier supplier of all Ethiopian cooking ingredients in the U.S.!

Citizens- niter kibbeh is one of my all-time favorite cooking co foments and it’s delicious on virtually everything – try it spread on a bagel, or use it to create a curried butter sauce for your protein of choice!

Do NOT follow this link or you will be banned from the site! Click here to see our Privacy Policies, Citizen!
65shares
wpDiscuz
2
0
Would love your thoughts, please comment.x
()
x
| Reply