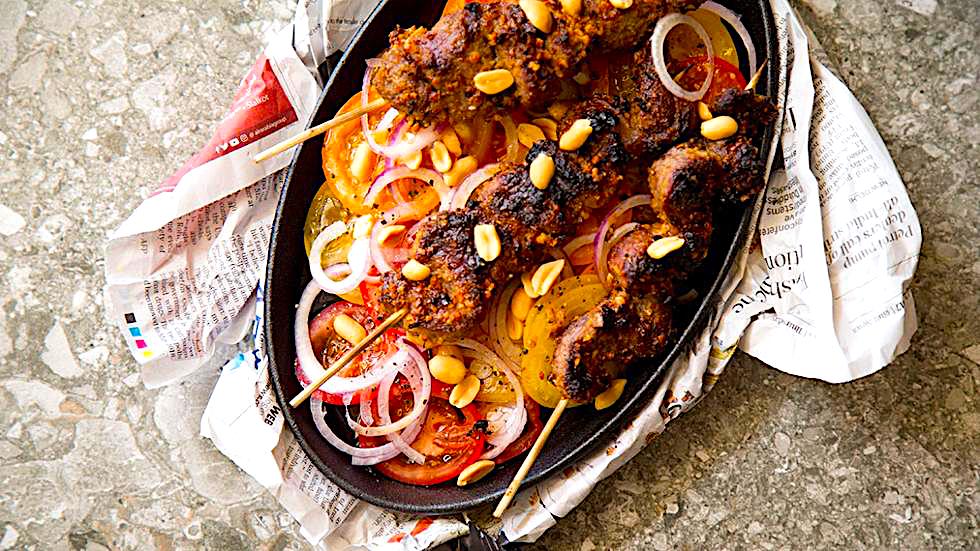 My Citizens, few things delight the heart of your suzerain – the almighty TFD! – more than learning about a new recipe, especially ones from people he respects. As such, I was delighted to discover this fantastic Nigerian recipe on the private forums at amazing ribs.com, where I am a frequent commenter.

Today, user @pequod posted his version of this sumptuous meaty delight, using a pre-prepared, store-bought spice blend. I thought I would like to try and make this with my own homemade version – not to take ANYTHING away from his version, because it looks and sounds spectacular! 🙂

So you know, Suya is a spicy meat skewer which is a popular food item in West Africa. It is traditionally prepared by the Hausa people of northern Cameroon, Nigeria, Niger, Ghana, and some parts of Sudan (where it is called agashe).

Suya or soya is the quintessential West African street food that is made up of well-spiced grilled pieces of meat that are mostly placed on a skewer. In Nigeria, it is called suya, in Cameroon, it is called soya, in Ghana, it is called, “chinchinga”. In French it is called, “les brochettes”. It is also known as “beef kebab” or “kabob”.

Suya is generally made with skewered beef, ram, or chicken. Innards such as kidney, liver and tripe are also used. The thinly sliced meat is marinated in various spices which include peanut cake, salt, vegetable oil and other flavorings, and then barbecued.

Suya is served with extra helpings of dried pepper mixed with spices and sliced onions. Halal meat preparation methods are normally used, especially in the northern parts of Nigeria, where the suspicion of nonconformity to Muslim dietary prohibitions in Suya preparation has been known to cause riots. A dried version of Suya is called Kilishi. It can be eaten with Garri or Ogi.

There is no standard recipe for the production of the complex mixture of spices and additives which make up the Suya marinade (called Yaji) and the spice mix served with it. Ingredients may vary according to personal and regional preferences.

Although Suya originated in the Northern parts of Nigeria, it has permeated the Nigerian society, being affordable for all and available everywhere. It has been called a unifying factor in Nigeria.

Suya has become a Nigerian national dish with different regions claiming the superiority of their recipe and methods of preparation, but similar grilled meat recipes are common in many West African countries.

My version is semi-ferociously authentic – using the rare “grains of Selim”, also known as African Negro Pepper or Uda. It’s very hard to find, but I have – thankfully – found a source that ships. It also uses a variety of other hard-to-source ingredients, such as Kuli-Kuli (an African snack made from peanut powder and spices) and Maggi seasoning cubes – I have a source for these as well. Kuli-kuli is here and Maggi cubes are here.

Since every Suya blend is top-secret and unique to each street vendor, I have taken the liberty of adding in a few unique spices probably not found in the original, including fennel pollen and kochugaru (Korean red pepper flakes) as well as white pepper (which probably is in the original).

Citizens, thank @Pequod for turning your guiding North Star, the inimitable TFD, onto this fantastic recipe! 😀