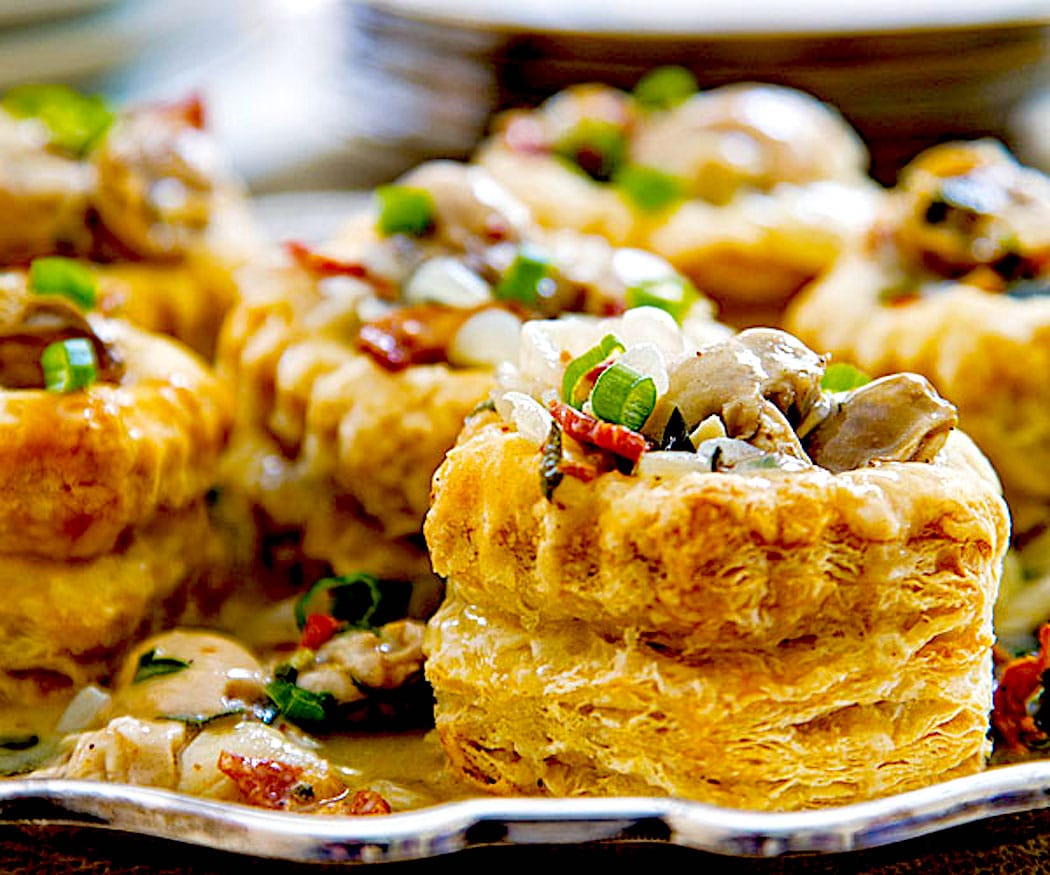 Citizens! Few would dare to contradict the inescapable truth that when it comes to urban centers with a unique and magnificent cuisine all its own, none can compare with la belle et ancienne ville – the Big Easy that alone is New Orleans! I consider this beacon of Divine culinary light to be one of the last venues on Earth to hold onto its unapologetically rich and delicious cuisine without compromise (New Orleans is my city Spirit Animal, obviously!) and it is why I am so pleased to share with you today one of its most rich and satisfying appetizers – the poorly-named but totally delicious oyster patties!

Despite the name, it is in no way, shape or form a ‘patty’ – but instead a vol au vent, a puff pastry shell filled with a sinfully rich and satisfying mix of oysters, cream, bacon and a whole lot more! ! !

In a scholarly writeup I discovered on neworleansbar.org:

Served as hors d’oeuvres over the holidays or on other festive occasions, oyster patties are another New Orleans favorite. They are alternatively known as oyster bouches, or bouchées, as well as oyster vol-au-vents. The shells are spooned in with a delicious filling of oysters and mushrooms and warmed in the oven until extremely hot. One must carefully avoid burning the roof of one’s mouth when first biting into one, but that’s how the delicious filling must be prepared.

We know that bouche is French for mouth, as in amuse-bouche, one of those tantalizing appetizers not ordered from the menu, but delivered at the chef’s whim. Bou·chée, on the other hand, is a small patty shell usually containing a creamed filling. In French, it means literally, a mouthful, from the Old French buchiee, from the Vulgar Latin buccata, from the Latin bucca, meaning cheek, or mouth. The word’s earliest known use was in 1846.

An article in the New York Herald, dated August 24, 1891, explains “French Terms on the Bill of Fare that Puzzle the Hungry Yankee and Compel Him to Call for Beans”. Included are “the small oyster patties known to the cook as bouchées aux huitres, or ‘mouthfuls’ of oysters.” The Picayune’s Creole Cook Book calls oyster patties “Petites Bouchees d’Huitres”. In the front of the cook book is an “Explanation of French Terms Used in Cooking and Serving Dishes”. “A Bouchee,” it is explained, “indicates a mouthful, and is from the French bouche, the mouth. It is applied in cooking to all very thin, small patties or cakes, as Bouchees d’Huitres, Bouchees a la Reine, etc.” “Oyster Bouche” was on the menu at Schaumburg’s at 829 Canal Street in November of 1917. The entire dinner was only 75 cents.

Chef Paul Prudhomme calls his oyster patties “Oyster Bouchees”. Tom Fitzmorris refers to them as “Creole Oyster Vol-au-vents”. Vol-au-vent is French for “windblown” so as to describe the pastry’s lightness. The term indicates a small hollow case of puff pastry that may also have a lid that is replaced after filling. There are large and small patty shells, and most New Orleanians remember the “ain’t dere no more” McKenzie’s as the place to go for oyster patty shells.

In 1986, Donald Entringer, McKenzie’s Pastry Shoppes’ President and son of company founder Daniel Entringer, explained the difficulty in making certain types of baked pastry items: “Patty shells (used for party snacks like oyster patties) are hard to make. We’re one of the few bakers in the nation that makes fresh ones.”

Citizens, my version of these rich and tasty treats is more ‘high-end’ than most, using fresh herbs and a few unique touches specific to my recipe. One optional but recommended addition I have made is the uniquely herbal elixir that was the precursor to green chartreuse that adds an immensely satisfying herbal note to the final dish – you can buy it here. I also use a blend of leeks and onions instead of just onion and also the perhaps surprising addition of Campbell’s condensed Cream of Mushroom soup. Do NOT turn your nose up on this humble ingredient – it adds immense savor far beyond just regular cream to the final dish!

I also suggest using a classic Southern ingredient for guaranteeing smooth gravies and sauces – Wondra gravy flour, which you can buy here. Another idiosyncratic touch of mine is the use of Aromat seasoning instead of plain salt, as again it adds more complexity of flavor. That said, do NOT buy any version of Aromat except the French or Swiss version, as the formulas differ greatly country from country – you can buy the right version here.

There are times to eat healthy and there are times to eat for pure gustatory bliss – this recipe absolutely falls into the latter category and I hope you will enjoy this as part of a complete New Orleans feast, perhaps one that includes this supremely elegant dish of yore – crawfish bisque!