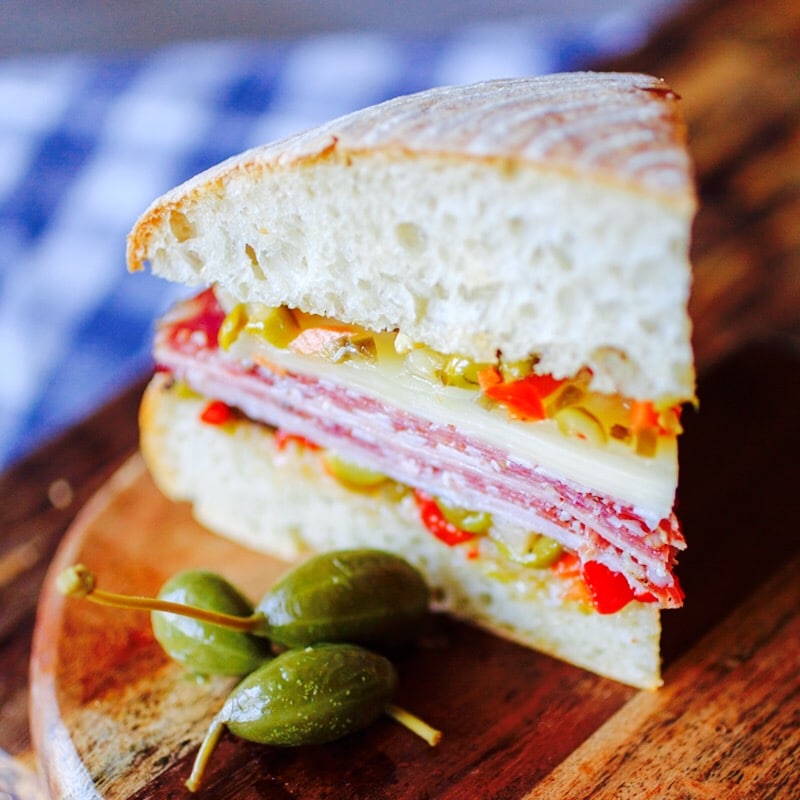 Simply one of the great sandwiches on this (or any other) planet, Citizens! 🙂

The muffuletta is both a type of round Sicilian sesame bread and a popular sandwich originating from Italian immigrants in New Orleans, Louisiana using the same bread.

A muffuletta is a large, round, and somewhat flattened loaf with a sturdy texture, around 10 inches (25 cm) across. It is described as being somewhat similar to focaccia.

Bread used for the Muffuletta is different from focaccia, however, in that it is a very light bread, the outside is crispy, and the inside is soft. It also has no additional seasonings baked into it, aside from the sesame seeds. The bread is more like French bread, but slightly heavier.

The signature olive salad consists of olives diced with the celery, cauliflower and carrot found in a jar of giardiniera, seasoned with oregano and garlic, covered in olive oil, and allowed to combine for at least 24 hours.

A muffuletta is usually served cold, but many vendors will toast it. This is a travesty, in TFD‘s opinion!

Supposedly, the sandwich was created by Signor Lupo Salvadore, who opened the now-famous little Italian market called Central Grocery on Decatur Street in the French Quarter in 1906 and still the home of the finest version of the classic sandwich in The Big Easy.

You’ll hear lots of New Orleanians pronounce the sandwich “muff-uh-LOT-uh”, but I understand that the proprietors of Central Grocery pronounce it “moo-foo-LET-ta”. The common abbreviation is “muff”.

“In order to enjoy a New Orleans Muffuletta Sandwich at its best, you must have authentic Muffuletta Bread. In New Orleans you can buy the crusty loaves in any bakery, but don’t forgo this treat just because you can’t find the bread – make it yourself!” From Cajun-Creole Cooking

My version of the recipe combines a great bread (bread is the heart of this recipe, I think), my version of olive salad (the soul) and of course, the meats (the body).

Enjoy this classic sandwich, my Citizens! 🙂 You can buy the giardiniera on Amazon.