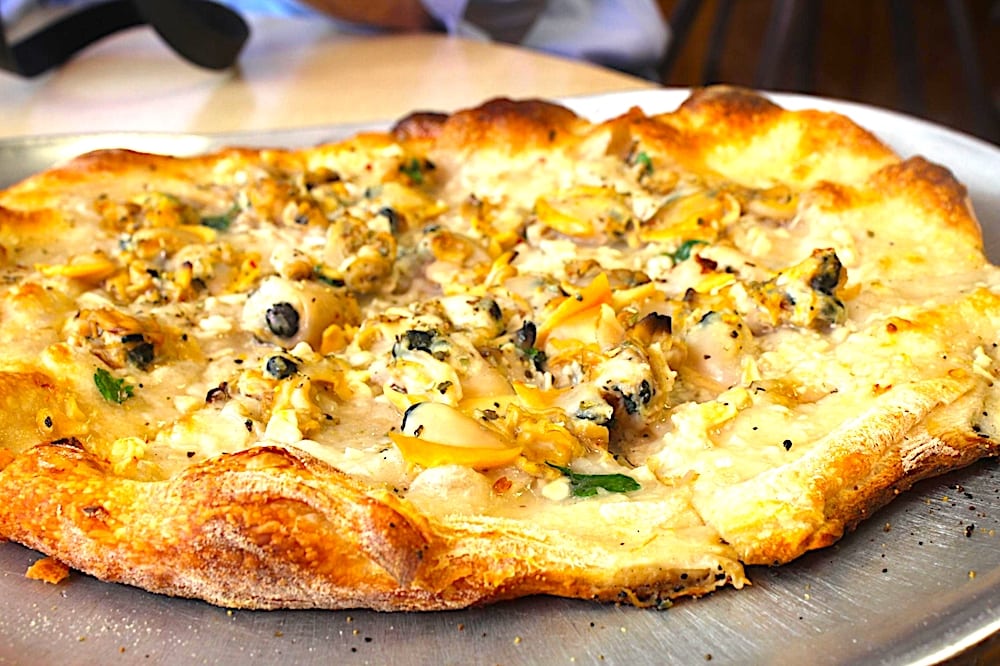 Citizens, we will conclude our tour of micro-regional pizza styles with this one from my home state of Connecticut – the legendary white clam pizza from New Haven!

I know, you are probably thinking TFD has finally had one Chateau d’Yquem 1983 too many and lost his gustatory sensibilities. Clam? PIZZA?

Before you think or say anything further – watch this video and you’ll learn why this pizza has been ranked NUMBER 1 IN AMERICA.

This is one of my all-time favorite pizzas on the planet and is supremely delicious – but it is by no means a standard “pizza”.

New Haven-style pizza, locally known as apizza ( from Neapolitan ’a pizza (“the pizza”), is a style of thin-crust, coal-fired Neapolitan pizza common in and around New Haven, Connecticut. It originated at the Frank Pepe Pizzeria Napoletana and is now served in many other pizza restaurants in the area, most notably Sally’s Apizza and Modern Apizza. This geographically limited pizza style has been favorably referenced by national critics.

In a New Haven-style pizzeria, a “plain” pizza is crust, oregano, and tomato sauce with a little bit of grated pecorino romano cheese sprinkled on and does not include Mozzarella. A “plain” New Haven style pizza may also be called a “tomato pie”. Mozzarella is considered to be a topping; a customer who wants it must ask for it.

What makes New Haven style pizza distinct is its thin, oblong crust, characteristic charring, chewy texture, and limited use of melting cheeses. It tends to be drier and thinner than, but closely related to, traditional New York-style pizza. Both styles in turn are close descendants of the original Neapolitan style.

New Haven-style pizza is traditionally baked in a coal-fired oven at extremely hot temperatures in excess of 650 °F (343 °C) and is sold whole rather than by the slice.

Although most commonly available in the New Haven area, New Haven-style pizza has begun to spread to other parts of Connecticut. It has been available in the Italian-American areas of Bridgeport, and other shoreline communities for many years. It is beginning to be served in areas typically not known for large Italian-American populations, including towns in northern and central Connecticut as well as other cities across the United States.

Citizens, few things in life make me happier than an entire pie of this, and I hope you will see past the clam and try what is assuredly one of the great pizzas on this Earth! I used to drive 90 minutes to New Haven just to eat this pizza when I lived in southern CT – that should tell you something.

Be sure and read my post on how to make the perfect pizza at home before attempting this recipe.

My recipe adheres closely to the original, with three minor changes – I call for my favorite pizza chili flake (the smoky and delicious urfa biber from Turkey) and I use fresh oregano instead of dried.

Lastly, I use a special trick to add savory goodness to the pie – brushing on 1 tbsp. of melted bacon fat to the dough before adding the toppings. This makes for an amazing pie, but is absolutely NOT in the original recipe. Omit it if you prefer.

Pepe’s uses whole, live fresh Littleneck clams from Rhode Island and shucks them on-site. You should have your fishmonger shuck the clams for you – DO NOT USE CANNED CLAMS UNDER ANY CIRCUMSTANCES. The dough recipe is one that I found on the Washington Post website and is ideally suited to this type of pie.