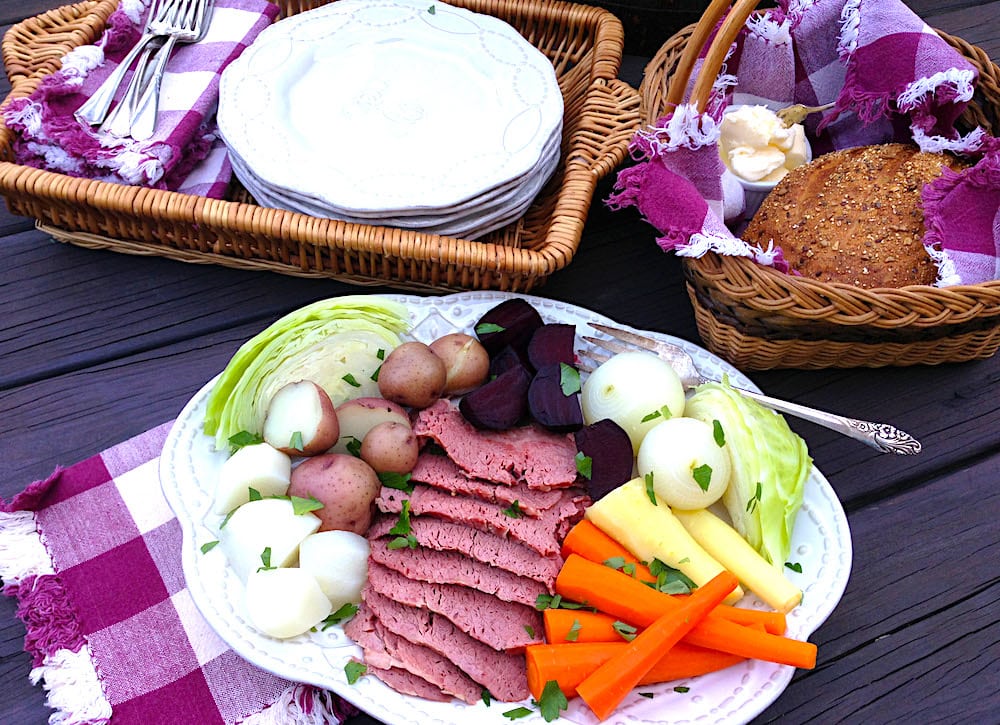 Citizens, your always stalwart Scion of supreme savoriness – the always alliterative TFD! – honed his love for cold during my youth when I went to school in Massachusetts. While there, I had the opportunity to sample the legendary meal of the region – New England Boiled Dinner!

As noted on atlasobscura.com:

CORNED BEEF HAS BEEN AROUND for centuries, and it will be on the tables of Irish-Americans this St. Patrick’s Day. But in and around Boston, corned beef looks a little different. Instead of its familiar pink-red color, it’s gray-brown. And no one quite knows why New Englanders do corned beef differently.

The color difference is due to one ingredient: nitrates, either in the form of sodium nitrate or saltpeter, added into the salty brine that gives brisket its corned taste and flavor.

Nitrates preserve meat and give it a reddish color, two compelling qualities that make red corned beef much more popular than gray. Nitrates, which are potentially carcinogenic, have long been controversial. But in an age before refrigeration, they were a blessing. In the 17th century, even saltpeter-containing gunpowder was rubbed on meat.

Without added nitrates, corned beef is a dull gray. It’s uncommon to find, except in certain regions. “[Gray] corned beef is eaten within a fifty-mile radius of Boston, including a few towns in New Hampshire,” writes Joan Nathan, author of An American Folklife Cookbook.

The usefulness of nitrates have made red corned beef the norm for hundreds of years. One of America’s most influential early cookbooks, The Virginia Housewife, calls for tablespoons of saltpeter to be rubbed over brisket. But it’s unknown why exactly Boston residents opted not to put saltpeter on their beef.

Robert S. Cox, author of books on New England specialties such as chowder, cranberries, and pie, says it’s a mystery to him too. “It’s gray, like the New England skies in late winter,” he says, “but I don’t get a sense that corned beef is that poetic.”

The gray/pink dichotomy is especially visible this time of year, as people prepare corned beef and cabbage. But according to The Oxford Encyclopedia of Food and Drink, not only is the beef not naturally pink, corned beef with cabbage isn’t really an Irish specialty.

On the Emerald Isle, a festive St. Paddy’s Day meal would include lamb or bacon. Instead, Irish-American corned beef and cabbage is a mash-up of different food traditions, one of which may hold the answer to the origin of gray corned beef.

Irish immigrants coming to the United States in the 19th century had extensive experience raising, curing, and exporting beef for the English. Beef was much cheaper in the United States, and many communities embraced it as a staple, such as the preserved meats of Jewish delicatessens.

Irish immigrants who lived in New England, especially around Boston, were quickly introduced to another tradition: New England’s boiled dinner. Consisting of corned beef and vegetables, boiled for hours, it soon became an Irish-American specialty. In Boston, at least, it’s often made with the mysterious gray corned beef.

If anyone would know the origins of Boston’s gray corned beef, it would be 79-year-old Al Cohen, a butcher and grocer at Bell’s Market in South Boston since the 1960s. His family has run markets in Boston over four generations, making gray corned beef all the while.

Cohen, who makes corned beef by the barrel from a family recipe, says he has no idea who started making the specialty. He prefers it, and he doesn’t offer the red kind at Bell’s: Customers who ask for it are directed to the supermarket. But there is one thing he’s certain about: The 900 pounds of what he proudly calls “New England gray corned beef,” which he’s made in the last week, will all be gone before St. Patrick’s Day.

Jasper White remains one of my all-time favorite chefs – his cookbook ”Jasper White`s Cooking from New England” from the early ’90’s re-defined New England cuisine and remains an indispensable weapon in my cooking arsenal!

In this excerpted article from the Chicago Tribune, Chef White extols the glory of his native cuisine:

‘We have this terrible image problem with `stodgy` New England and frumpy-looking people with their blue blazers and their tasteless, bland, boiled food,” White grumbled the other day.

”I’ve tried to bring to New England cooking just a little glamor and pizzaz,” White said. ”Now that America has gotten over its Francophilia, it’s much easier for us to take a look at food that is good and will always be good.”

In 1983, White and his wife, Nancy, opened Jasper’s in a former molasses warehouse on the Boston wharf. There he has evolved New England cooking into a sort of international cuisine with Native American influences remaining strong (baked beans, clam bakes, steamed brown bread), while Italian, British and other overseas touches are accorded their proper place.

”I’ve taken what I think was good out of the traditional repertoire and touched it up while trying to leave it fairly authentic,” White explained.

White not only defends the New England boiled dinner, he extols it.

”It’s really one of the great dishes of our region,” he said. ”In a sense, it’s America’s only boiled dinner, and almost every country has one. Ireland, for example, has corned beef and cabbage. Ours is not to be underestimated.”

”There aren’t any tricks to the New England boiled dinner. It’s a matter of not putting everything into the pot too early. You let the brisket cook until it’s almost cooked through. And then you add the vegetables in their proper order. It’s like a bouillabaisse-whichever vegetable takes longest to cook goes in first. One of the most important ingredients in a boiled dinner is the beets. Those are cooked separately.”

A look of bliss came over White’s face, an expression rarely seen on anyone when the topic is boiled dinners. ”I love this food. I’m really passionate about it,” he said. ”It’s what I serve my friends when they come over for Super Bowl Sunday.”

”I’ve also included a lot of the ethnic foods around New England, especially Portuguese. We have a large Portuguese population, and they pretty much control the Massachusetts fishing industry now.”

Citizens, my version of this classic adds several touches of elegance and flavor to the humble dish. First off, I veer strongly into Portuguese territory by adding some Portuguese Linguiça sausage to the corned beef. Be sure and use the best Massachusetts Portuguese version of the sausage, you can buy it here if you don’t live in Massachusetts.

Finding the true “gray-cured” beef outside Massachusetts is almost impossible, but the glory of the Web means you can order it online here. If you don’t want to use it, try using an artisinally-made corned beef instead. I also recommend an optional touch of demiglace to the gravy for added richness – leave it out if you so prefer. You can buy it here.

The spice mix really adds to the total flavor and I’ve borrowed several amazing techniques from jabberwockystew.net, as noted here:

The things I do not like about boiled dinners are the mushy carrots and potatoes and the thin, watery broth.

Pre-cooking can give some vegetables and fruits a persistent firmness. The low heat causes a enzymatic reaction between the pectin and the calcium to create a network structure that does not break down in high heat. No more mushy carrots or potatoes!

If you simply throw many vegetables into a pot at high heat some of them will turn mushy when they become even slightly over-cooked. However, if you cook some vegetables at 120º-160º F for 20 minutes their firmness will become set and further cooking at a higher temperature will not make them go soft. These include: potatoes, sweet potatoes, beets, carrots, beans, cauliflower, tomatoes, cherries, and apples.

A second suggestion, from the same article, was to use a cartouche. Instead of removing the vegetables and reducing the broth, you use a parchment paper lid. This allows the most of the liquid to escape as steam, while still keeping enough of it close to the vegetables so that they cook evenly and completely.

<TFD note – directions on making a cartouche are here.>

My version of this recipe brings nobility and a complexity of flavor that the typical boiled dinner lacks – the use of Portuguese sausage adds even more savor! Don’t wait until the next St. Patrick’s Day to make this delicious meal, Citizens!