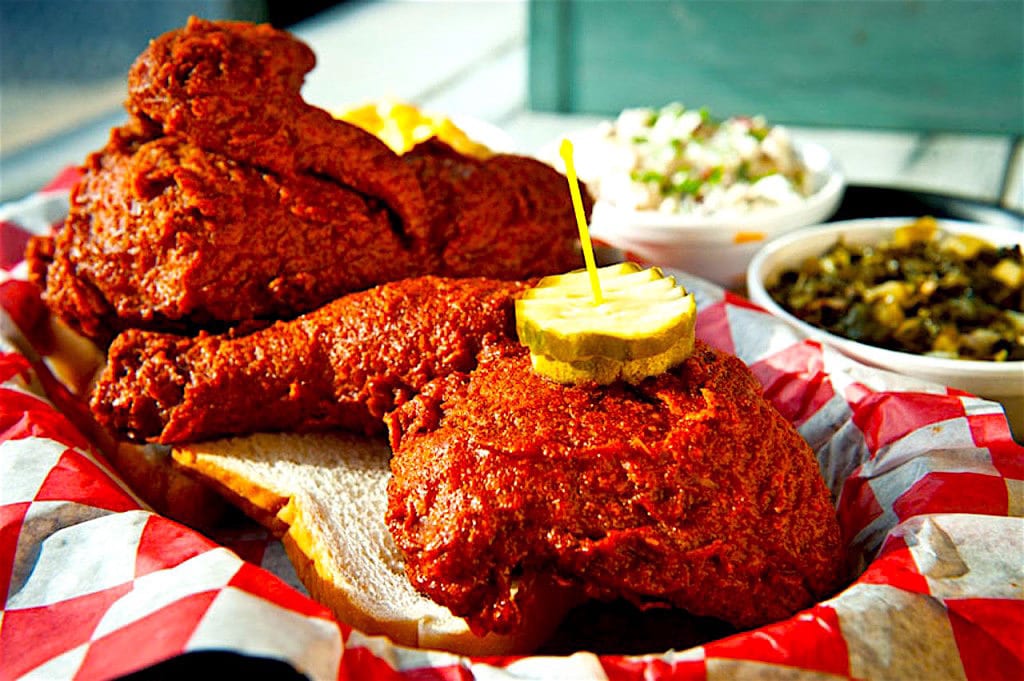 Citizens, Nashville hot chicken is a type of fried chicken that is a local specialty of Nashville, Tennessee, in the United States.

In its typical preparation, it is a portion of breast, thigh, or wing that has been marinated, floured, fried, and finally sauced using a spicy butter or oil paste. It is served atop slices of white bread with pickle chips. It is both the application of a spicy paste and the presentation that differentiates it from similar dishes, such as Buffalo wings. It can be viewed in similar context to other foods that have been tweaked to be unique in a regional way, such as the slugburger or the Mississippi Delta tamale.

Anecdotal evidence suggests that spicy fried chicken has been served in Nashville for generations. The current dish may have been introduced as early as the 1930s, however, the current style of spice paste may only date back to the mid-1970s. It is generally accepted that the originator of hot chicken is the family of Andre Prince Jeffries, owner of Prince’s Hot Chicken Shack. She has operated the restaurant since 1980; before that time, it was owned by her great-uncle, Thornton Prince III.

Although impossible to verify, Jeffries says the development of hot chicken was an accident. Her great-uncle Thornton was purportedly a womanizer, and after a particularly late night out his girlfriend at the time cooked him a fried chicken breakfast with extra pepper as revenge. Instead, Thornton decided he liked it so much that, by the mid-1930s, he and his brothers had created their own recipe and opened the BBQ Chicken Shack café.

Ironically, what began as breakfast revenge is now considered to be a staple food for late-night diners. On weekends, most restaurants dedicated to hot chicken are open very late (some past 4 am). As of 2015, there are an estimated two dozen restaurants in the Nashville area that serve hot chicken, either as the focus or as part of a larger menu.

For a time, country music stars Lorrie Morgan and Sammy Kershaw owned and operated a now-defunct hot chicken restaurant called “hotchickens.com”. The former mayor of Nashville Bill Purcell is a devoted fan, sponsoring the Music City Hot Chicken Festival and giving numerous interviews touting the dish. While in office, he frequently referred to his table at Prince’s Hot Chicken as his “second office”.

Citizens, my recipe is resolutely traditional, with a few TFD tweaks and I hope you find my version of this Southern classic to meet with your approval! 🙂