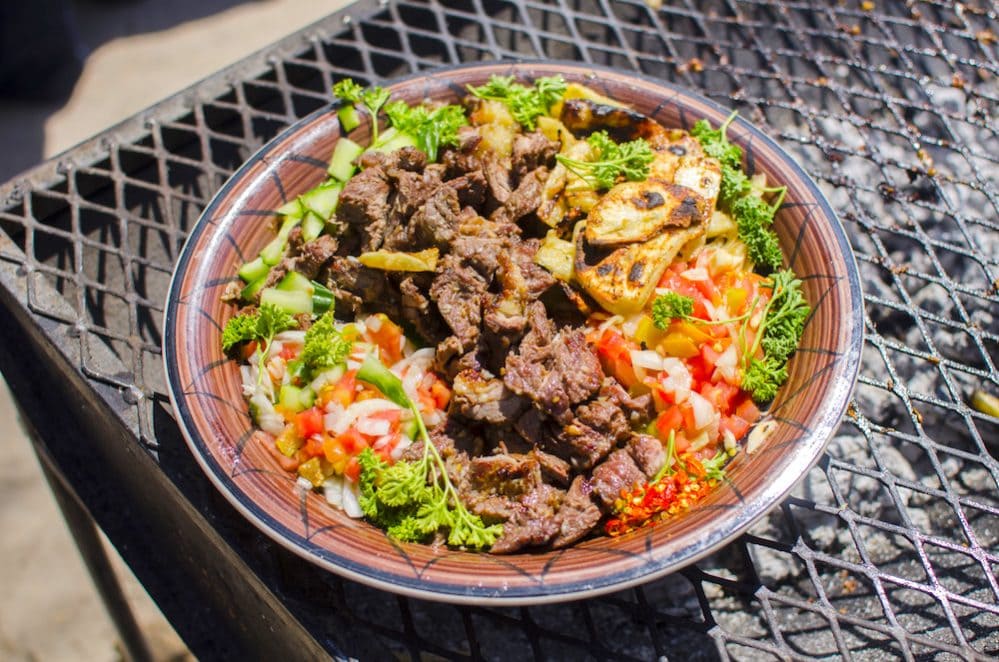 Citizens! Few things, IMHO, offer greater proof of a kind and benevolent Deity than the gustatory joys of barbecuing meat over open flame – and this unspeakably delicious street food from the proud country of Namibia excites every carnivorous nerve in the body of TFD Himself! 😀

If you’re not familiar with Namibia, allow me to educate you on this bastion of African democracy!

Namibia, a former German colony, is situated towards the north west of South Africa. The Orange River marks the border between the two countries. In 1885 the Chancellor of the German Empire, Bismarck, held a convention in Berlin where European powers divided Africa among themselves. This was called the “Scramble for Africa”.

In 1886 the border between Angola and what would become German South West Africa was negotiated between the German and Portuguese nations. In 1890 the first German military fort was built at the capital of Windhoek and, in July of the same year, the British government also apportioned the Caprivi Strip to the Germans.

Eventually, South Africa took control of the region, until the local population successfully rebelled against the harsh and unjust rule of apartheid and were declared independent of South Africa in 1990.

The country is about 800,000 square kilometers. The first European that landed in Namibia was the Portuguese explorer Diogo Cão, who came ashore north of Swakopmund at Cape Cross in 1484. .

Parts of Namibia are notoriously dry and much of the country is made up of the Namib Desert (the oldest desert in the world!) and the Kalahari. Towards the north, the country becomes greener with the Etosha Pan filling with water from northern rivers. This area is rich in diverse wildlife.

The Skeleton Coast marks the area where the Namib meets the Atlantic Ocean and is littered with wrecks of ships that ran ashore in the treacherous waters, whalebone shelters used by the San and ghost towns that boomed during the early diamond days.

Due to its harsh environment Namibia is sparsely populated with various different groups. The country is rich in natural resources and its main mineral products are copper, diamonds, gold, lead and uranium.

The cuisine of Namibia reflects its varied roots in Europe and South Africa, as further elucidated on csmonitor.com:

Namibia, the land of meat lovers
The cultural equivalent of the American hot dog, grilled beef – kapana – is the street food of this cow-revering nation’s rich and poor.

By Stephanie Hanes Contributor to The Christian Science Monitor

KATUTURA, NAMIBIA
By the time the sun rises over this desert township, Benjamin Cornelius is already getting the grill good and ready. He’s bought wood elsewhere in Katutura, the settlement formed when apartheid-era leaders moved the capital’s black residents here in the 1960s, and has started up his fire.

After dawn, he browses the carcasses splayed out on the stalls behind him, looking for the right cuts of beef at the cheapest price.

Then, just before the market opens at 7 a.m. and the crowd starts clamoring for its breakfast, Mr. Cornelius – along with a dozen other grillers – begins to cook.

“I’ve been selling kapana for three years,” he says as he jabs at a pile of meat and fat, beads of sweat on his forehead visible through the smoke. “It’s hard work.”

This vast, arid country is a land of meat lovers, and proud of it: The ministry of trade and industry announces on its website that “the quality of Namibian meat is globally unrivaled.”

One ethnic group, the Herero, believes cows are so beautiful that their matrons should try to resemble them – they wear wide, fabric-heavy dresses and stuffed, triangular-shaped hats that are supposed to resemble horns.

Although cows are often seen as a type of currency – a rich man might boast a herd of a few hundred animals – there is no prohibition against eating them. Quite the contrary. “Bring your own meat” is this country’s form of potluck.

As in neighboring South Africa – the country that ruled over Namibia during apartheid and is still considered a sort of cultural big brother here – the braai, or barbecue, could be considered Namibia’s national pastime.

Indeed, in this nation where it is estimated that there are almost a million more cattle than people, beef consumption is not only high for Africa, but ranks with the developed world.

Data from the UN Food and Agriculture Organization show that per capita daily calorie intake from beef in Namibia is twice as much as Kenya’s, nine times as much as Nigeria’s, and almost equal to Canada’s.

Meat is considered a luxury in many developing countries like Namibia, where the UN estimates that 55 percent of the nation lives on less than $2 a day. But even lower socio-economic groups here eat meat regularly, says Uschi Ramakhutra, a spokeswoman for the Meat Corporation of Namibia (Meatco), one of the largest beef exporters here.

She explains that this is because of the high percentage of the population involved in agriculture and small stock ranching. There are few places where this carnivorous inclination is on better display than the Oshetu municipal market in Katutura, and at other kapana stalls throughout the township.

Depending on one’s ethnic group and how long one has lived in Windhoek, Namibia’s capital, there are different definitions of the word kapana. Some people say it is the actual food – the slices of beef and fat grilled together on the open stoves, served rolled up in a newspaper with the option of salt, chili flakes, or peri-peri seasoning.

Others disagree (sometimes vehemently) and say that the actual food is called “otete,” and that kapana is the market place – or the act of turning raw, red meat into the area’s favorite snack food.

Either way, kapana is popular, in the way McDonald’s is popular in the US – relatively cheap, available everywhere, almost a culinary afterthought but central to many peoples’ daily routines. Businessmen working in downtown Windhoek will drive a mile or so back to Katutura during lunchtime to go to their favorite stalls; township locals use pocket change to get snack-sized servings at all times of the day.

“Oh my goodness, these people are making a good business,” says Katutura resident Verona Thomas of the kapana sellers. She came to the Oshetu market to buy meat for dinner, but since she was here, she says, she naturally stopped at one of the kapana stalls to buy a snack of meat for herself and her 5-year-old daughter, Zeni.

To make kapana, the grillers slice strips of meat and fat. (They won’t always divulge which cuts they use because sometimes they try to mix cheaper parts of the cow with the tastier morsels.) They cook the meat on a metal grill, placing the fat on top of the meat to keep it moist.

Once the beef is cooked, they chop it and the fat into cubes and serve it in newspaper for quick take away, or in a sweet, almost donut-like fried bun. (About 50 cents gets a pile of beef for one.) When it’s cooked right, the beef is moist and smoky, the salty fat is crispy on the outside and chewy on the inside – almost like a grilled hunk of cheese.

Each griller has a cardboard box of spices next to his workstation – the customer can add whatever sprinkled spices are desired.

At official markets, such as Oshetu, the municipality rents grill space to registered kapana sellers, who often wait years for a spot. Elsewhere in Katutura, which has a population of about 200,000, unofficial meat cookers set up makeshift grills along taxi routes and on street corners.

Usually the kapana sellers are men, although sometimes women will sell the accompanying buns and sometimes sit next to the kapana stalls selling cow hooves – a popular snack to gnaw on – out of plastic buckets.

To the uninitiated, all of the kapana stalls pretty much look alike – a bunch of sizzling meat and fat behind a veil of grill smoke.

But Best Karamatha, who lives in the high-end Katutura neighborhood dubbed “Luxury Hill,” says there is a strategy to getting the best pieces.

“There are some stalls that are better than others,” says Mr. Karamatha, who is carrying a bag of raw meat that he intends to turn into a potjie, a traditional stew cooked in a three-legged cast iron pot.

When he wants to buy kapana, Karamatha walks down the row of grillers, inspecting the strips of fat, looking for whiter pieces rather than those that have a yellowish tint.

He won’t go to any station where the griller calls out to him, he says, because that makes him suspicious. Instead, he’ll look for something else: “Sometimes, you’ll see them doing this,” he says with a laugh, waving his hand back and forth as if he is trying to keep away flies.

That, he says, is a clue that the meat is fresh, and that the kapana seller is taking care of his product. He says he gets kapana almost daily, but especially on the weekends.

“Meat for us is breakfast, lunch, and dinner,” says Mr. Hukura, the Katutura tour guide. “”When I took some South Africans around, they were wondering how people ate that much kapana. But everyone knows themselves. We know what kind of stomachs we have.”

Citizens, this meal will truly inspire your culinary dreams – and it is not at all difficult to make! I have kicked up the recipe a notch with my own (formerly secret) recipe for Piri-Piri seasoning – you can buy the needed chili pepper here and Maldon sea salt flakes here.