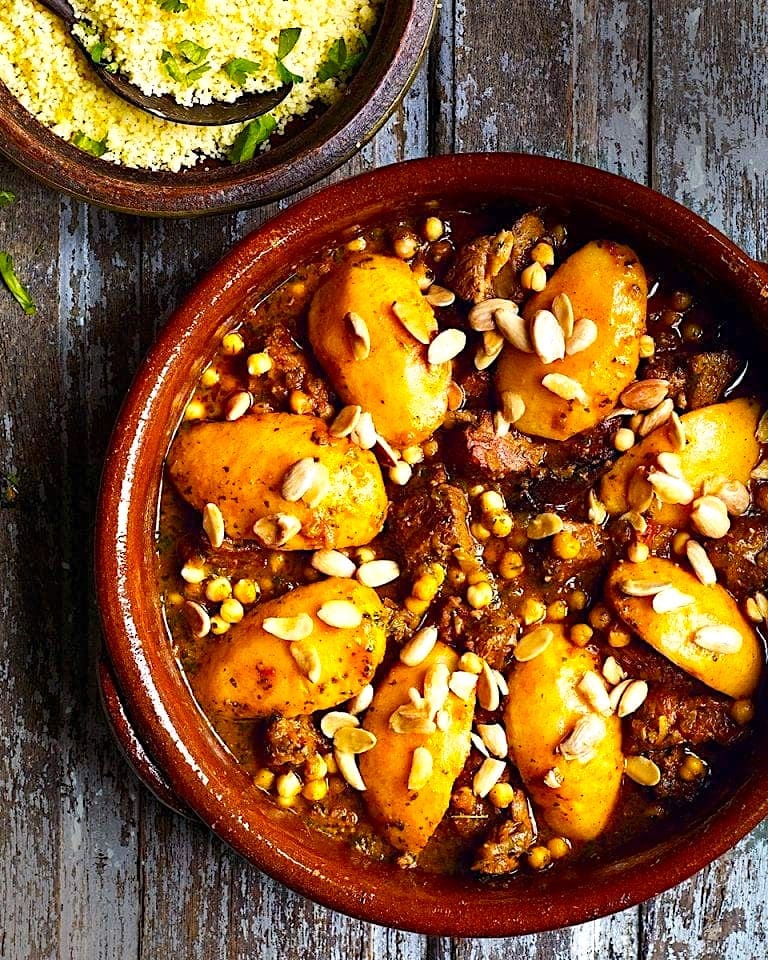 Citizens – we sadly live in an impatient world of culinary darkness. Where lengthening shadows of fast food and hurried shortcuts seek to blind us to the undeniable culinary truths that shine as laser-like beacons of light and hope, telling us to cook the traditional recipes of the past.

Mercifully, the cuisine of Morocco is one of the most advanced and complexly-flavored the world has ever been blessed to receive, and they have rightfully showed the soles of their shoes (the greatest insult in this culture) to anything that would dumb down their culinary heritage. This recipe for lamb and quince tagine is a perfect example and hails from the legendary blue city of Chefchaouen – and it actually has strong Jewish roots! 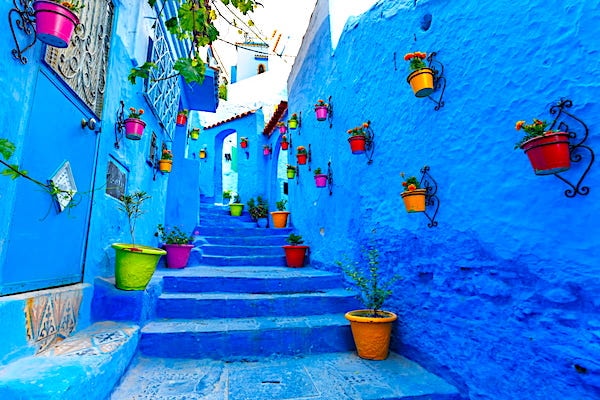 The Medina of Chefchaouen!

As noted in this excerpted article from internationalcuisine.com:

Chefchaouen means two horns in the Berber language, named for the topography of the mountains just above this quaint city, nestled in the Rif Mountains.  Known also as, the Blue City, the name is often shortened to simply Chaouen pronounced like shower with an “n” instead of an “r” at the end.

The market square was as far a vehicle could go, so the rest of the journey would be on foot to reach our hotel.  In fact, most of the narrow streets of Chefchaouen are not meant for vehicles.  The square is part of the fortress that was designed to stop the Portuguese invasion.  It was built back in 1471, created by Mulay Ali Ben Rachid, (considered to be a descendant of the Prophet Muhammad).  It also served as a refuge during the Spanish Inquisition and Reconquista for thousands of Sephardic Jews and Morisco Muslims who were expelled during that time.  Up until the Spanish occupation in the 1920’s, the town’s mighty walls were closed to visitors and other religious groups.

It is thought that the reason the city is painted with every conceivable shade of blue, was influenced by the Jewish religion.  It is also believed that the color blue, is a mosquito repellent. To the Jews, it is a holy reminder of God’s power.  The same blue painting was done to the homes in the ancient Israeli, City of Safed.  Although the Jews are now a minority, with only a small area known as the Jewish Quarter remaining, in the mostly Muslim city of Chefchaouen, the painting continues.  Every spring the women get out their favorite shade of blue and give their homes, outside doors and walls, a touch up.

The name “The Blue City” is an understatement at best.  To walk along the narrow cobble stone streets with walls and doors drenched in blue and then to come upon a winding staircase that seems to climb to the heavens, you feel as if on the threshold of a spectacular mountain vista shrouded in shadows or perhaps surrounded by a hypnotic, aquatic paradise.  It has calmness about it, a sense of serenity and spirituality.  The people and shop keepers are kind, warm and generous.  As they pass you on the street, they place one hand over their heart and whisper, “Shalom.”

To say thank you, you say Shukraan, however in the Blue city they say it with a couple pats of their hand to their hearts as a sign of sincerity.  I think we all left a piece of our heart in Chefchaouen and we hope to one day to return.

Now – as to a quince… It never ceases to amaze the Sagacious One how most Americans are sadly unfamiliar with this deliciously-perfumed fruit of Paradise! The Arabs have long appreciated this most fragrant example of nature’s bounty – quince or sfarjal has been used for centuries in Arab cooking dating back to the 10th century! According to Ibn Razin Al Tujibi – Kitab Al Tabikh back in the 13th century, dishes with quince were highly recommended for ‘strengthening’ the stomach.

As familiar with the quince as the Arabs were, its history stretches back millennia further within the Jewish community. Sadly, most American Jews have forgotten its existence despite a history of thousands of years experience with it – a fresh quince remains a rarely-seen novelty in America, which is a real shame. As eruditely stated on flavorsofdiaspora.com:

By the way, for those of you that have not had them: quinces are a type of fruit related to apples and pears. These oddly-shaped orbs are in season in the autumn and early winter and are famous for their fragrance.

Cooked, they taste like wild, gamey apples – but are in the United States more commonly seen in Latin American quince pastes and jellies. The fresh fruit is certainly not nearly as common as its cousin, the apple, in North America. And, like the apple that we eat at Rosh HaShanah, the quince is a very Jewish fruit.

Quinces have a Jewish history stretching back to the Bible. Some scholars believe that the “apple” mentioned in the Song of Songs (Shir ha-Shirim) was actually a quince, which was prized across the ancient Mediterranean for its fragrance.

So celebrated, in fact, was the quince’s aroma that the Babylonian Talmud prescribed that a blessing be recited upon smelling the fruit (Berachot 43b). The fruit was prized by non-Jews across the Mediterranean and Persian worlds too: Greek and Roman writings both made mention of the fruit.

In the medieval era, quinces remained popular in the Middle East – where Syrian quinces were famed – and in Europe, where the fruit graced Charlemagne’s imperial estates. Jews, too, ate quince for both culinary and medicinal reasons.

In the latter case, quince was used against coughs and stomachaches, and Maimonides mentioned that eating quince was a remedy for headaches. Yet it was for cuisine that the quince’s complex and fragrant flavor was most renowned: and quince was widely consumed.

It was found in the bembriyo paste that Sephardim brought from Spain (where it is called membrillo) across the Mediterranean after the expulsion of 1492, the quince preserves North African and Italian Jews served at Rosh HaShanah, or in the jam eaten year-round.

Though traditionally thought of as a “Sephardi” food, Ashkenazim in the southern parts of the Yiddish world – Hungary and Romania today – were often exposed to the fall fruit as well.

By the turn of the twentieth century, quinces were being preserved and cooked across a wide swath of the Jewish world – from tarts in France to tagines in Morocco, from quince cheese in Hungary to the jam here in Tunisia, Libya, Turkey, and Iran. One old English Jewish cookbook I found from 1907 had several recipes for quince compotes and jams.

Today, quinces remain popular in some parts of the Jewish world. In Israel – where quinces have grown for thousands of years – preserves and sweets made from the fruit are widely eaten, though perhaps not every day.

Quince trees are also found in cooler regions of Israel and Palestine; my mother, who lived for many years in Israel, remembers seeing quince trees at her friends’ houses.

Quinces are also common in the Sephardi and Moroccan Jewish communities of France, another quince-loving country, where treats from the fruit are eaten at Rosh HaShanah and throughout the autumn. In Argentina, quinces have been used as a substitute for apples in traditional Ashkenazi pastries.

Yet in the United States this enigmatic fruit – once common in the Northeast – remains rare and rather unknown.

So, we have now traced the history of this unusual tagine (stew) to a blue Moroccan city with a proud Jewish history and further explained the probable Jewish origins of the recipe – now let’s dive in and get to the meaty heart of the matter, the tagine itself!

I recognize that quinces are hard to find in the U.S., but I have come up with a substitute that is far easier to purchase and is a reasonable facsimile of a quince: slightly under-ripe Bartlett pears poached in earl-grey tea, rosewater, lemon juice and a few drops of red food coloring. This does effectively simulate the taste, texture and color of the highly-perfumed whole quince and I also specify some membrillo paste as well – a common item at cheese shops, Whole Foods and elsewhere that is actually a quince jam! You can easily purchase it here.

Ras el Hanout is the classic, deliciously-complex spice blend used lavishly throughout Moroccan cuisine – I have a recipe for my own version here or you can buy a decent store-bought alternative here. To make this properly, you must of course have a real tagine, the cooking vessel whose name identifies the stews made within it! You can buy gorgeous hand-made tagines online here.

Being the resolute traditionalist that I am, I also call for an ingredient rarely seen outside of Morocco that is a necessity for real Moroccan cooking – smen, aka fermented butter. Since smen is almost impossible to find (unless you make it, as TFD suggests here), I offer an easy-to-create compromise of mixing butter with a bit of blue cheese. Lastly, you can buy excellent preserved lemons here.

Citizens, Moroccan tagines are some of the most delicious stews upon planet Earth and it is your civic duty to try this recipe at earliest opportunity!

Do NOT follow this link or you will be banned from the site! Click here to see our Privacy Policies, Citizen!
155shares
wpDiscuz
2
0
Would love your thoughts, please comment.x
()
x
| Reply