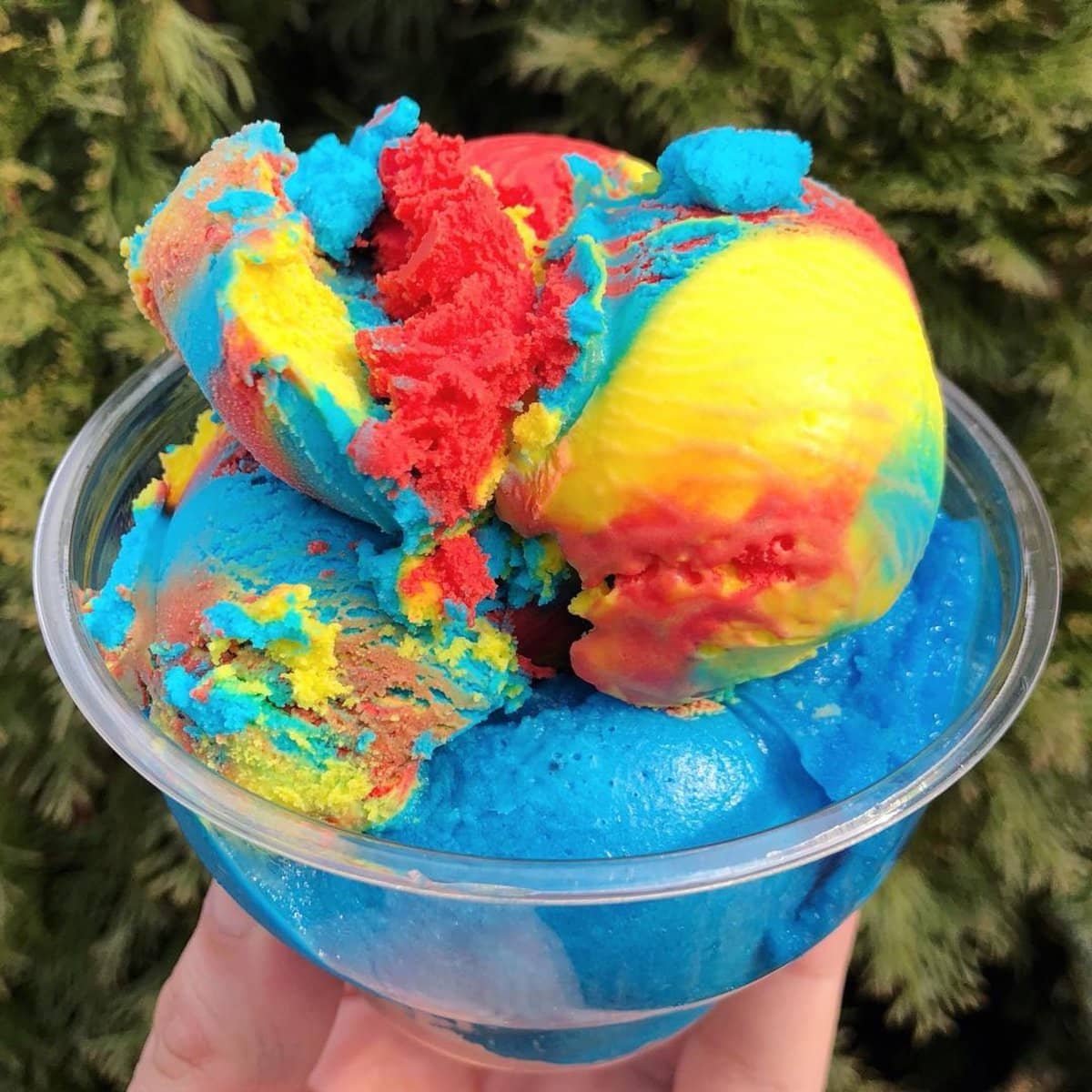 Citizens, few things bring a bigger smile to the face of the Omnipotent One – the Gastronomic Gargantua who alone is TFD! – than seeing the newest post from my favorite food history website! Yes, I speak of nothing less than the glory of Gastro Obscura – if you’re not yet familiar with it, sally forth and check it out without delay! It never fails to enlighten even me with my encyclopædic knowledge of all things food-related, and their latest email talked about a unique midwestern treat – Superman ice cream!

It’s rather obvious why it’s called that – the colors are identical to the Man of Steel’s costume, and before we even get to the history of the ice cream, let me enlighten you as to the Jewish origins of Superman! 🙂

As noted in a fantastic article on the Daily Beast, which I shall excerpt here:

Superman is as American as apple pie, in that both have their origins in the Middle East.

Apples, because they are thought to have been first domesticated in Turkey, and Superman, because of his oftentimes overlooked Jewish heritage.

Superman’s possible Judaism shouldn’t be a surprise. The hero’s creators, Jerry Siegel and Joe Shuster, were the children of Jewish immigrants. The comic book industry, where they spent a significant portion of their young careers, was created in New York by Jews like Max Ginsburg, Bob Kahn, and Jacob Kurtzberg, who hid their ethnicity behind names like Gaines, Kane, and Kirby. Over the years there have been scores of books and articles on the subject with punny names like Up, Up, and Oy Vey or “Mensch of Steel.”

Along with the web content, Dr. Craig Detweiller, Ph.D. of Theology and Culture, wrote a nine page essay titled “Jesus–The Original Superhero” to specifically link the Last Son of Krypton with the Son of God. Detweiller cited the oft repeated evidence about the suffix “el” appending Superman’s Kryptonian birth name “Kal-el.” In Hebrew, the “el” suffix is used to denote Elohim, or Yahweh, Jehovah, or God, like in the names Michael, Ariel, and Raphael. In his essay, Detweiller also referenced the Jochebedian orphanization Superman suffered as his parents, forewarned of the planet Krypton’s imminent demise, shot their baby into outer space like a futuristic Moses.

Orphaned at birth to protect him from a world destroying cataclysm, the Man of Steel is most often compared to Moses because they were both raised by non-Jewish families and eventually accessed magic powers to save their tribe. Also presented as evidence are the similarities between the S symbol on Superman’s chest and the Hebrew character Lamedh. Larry Tye, author of Superman: The High-Flying History of America’s Most Enduring Hero, compared Superman’s code of ethics—“Truth, Justice, and the American Way”—to the Mishnaic values of “truth, peace, and justice.”

Perhaps the most important link to a Hebrew superhero is Superman’s identity as a partially assimilated immigrant. The 1930s New York that produced the world’s first modern superheroes was awash in recent Jewish refugees fleeing the pogroms of 19th century Europe. According to “The American Jewish Experience in the Twentieth Century: Antisemitism and Assimilation” by Jonathan D. Sarna and Jonathan Golden at Brandeis University, “In 1900, more than 40 percent of America’s Jews were newcomers, with ten years or less in the country” and the next quarter century saw a wave of immigration as “another 1.75 million Jews would immigrate to America’s shores, the bulk from Eastern Europe.”

It was also during their time in Ohio that Mel Gordon, writing for Reform Judaism Magazine in 2011, suggested it would have been impossible for Siegel and Shuster to not have become acquainted with Zishe Breitbart, the Jewish strongman.

In 1923, Breitbart played both Cleveland and Toronto when Siegel and Shuster were only nine years old. There is no record of either artist attending the shows, but it would have been unlikely they were unfamiliar with the early 20th century Heracles. Gordon writes, “The Cleveland News raved that he was ‘more interesting than the Eiffel Tower.’

During the Christmas season, he performed before 85,000 spectators at the New York Hippodrome, then the ‘largest playhouse in the world,’ smashing all previous attendance records.” Renowned for feats of strength destined to become hallmarks of the comic book Superman, Breitbart dazzled audiences with all the strongman classics: bending steel bars, breaking “unbreakable” chains, lifting elephants. In at least one of the Jewish strongman’s American tours, Breitbart was billed as “the Superman of the Ages.”

Although revealing any link to Judaism would have doomed the Superman franchise, several early stories focus on Superman fighting Nazis and proudly declaring himself a “non-Aryan” as he socked Adolph Hitler on the jaw. The comics led propaganda minister Joseph Goebbels to accuse Superman of being a Jew, and at least one vicious 1940 editorial in the SS newspaper Das schwarze Korps was titled “Jerry Siegel Attacks!”

Superman’s cape was actually a tallit, the prayer shawl that observant Jews wear draped like a cape over their shoulders The blue in Superman’s costume was the shade of blue found in the sacred color of ‘techelet’, seen today in the Israeli flag. All fascinating and it makes me proud to be Jewish knowing the Man of Steel’s origins reflect my own heritage. 🙂

Now, as to the glory of Superman Ice Cream:

Superman ice cream is an ice cream that comes as a swirl of three colors: blue, red, and yellow, the three colors of Superman’s costume. The name of the ice cream comes from the colors of the comic book superhero Superman, though it is not licensed through DC Comics.

Some will argue the popular Midwest flavor originated in Detroit-based ice cream shop Stroh’s, though the exact origin remains elusive. Another Michigan dairy House of Flavors in Ludington makes their Superman ice cream with their signature Blue Moon, cherry, and lemon ice creams. The flavor has been spotted in other Midwest locales, such as Chocolate Shoppe Ice Cream Company in Madison, Wisconsin, and Pierre’s Ice Cream Company in Cleveland, Ohio

Since there is no canonical version of Superman ice cream, I shall share my highly up-market version with you! The most difficult to replicate ice cream is the blue one, since the recipe is a closely-held secret. I found a version on food.com that is universally-acknowledged as the closest clone. I’ve used it as well.

For the yellow ice cream, I’ve decided to use Persian saffron ice cream as a base, but without the usual pistachios and rose water but with the new addition of lemon extract.

For the red ice cream, I’ve specified cherry ice cream with the addition of some Cherry Heering brandy to really amp up the cherry quotient and some crème fraîche for tang. The almond and cherry flavors from the Heering give a classic ‘Bakewell Tart’ flavor profile that I dearly love.

It’s important to get the proper ‘Day-Glo’ color in this ice cream blend – gel-based food colors provide the most vibrant hues. You can buy my preferred yellow, red and blue gel colors at the links. As for the necessary flavor extracts, my preferred brands of lemon, vanilla and raspberry are at their respective links.

Citizens, I hope you will see fit to try this ice cream beloved by children and adults alike throughout the Midwest (my sophisticated flavors will make it even more for the adults!) and know the humble glory of this delightful icy treat!