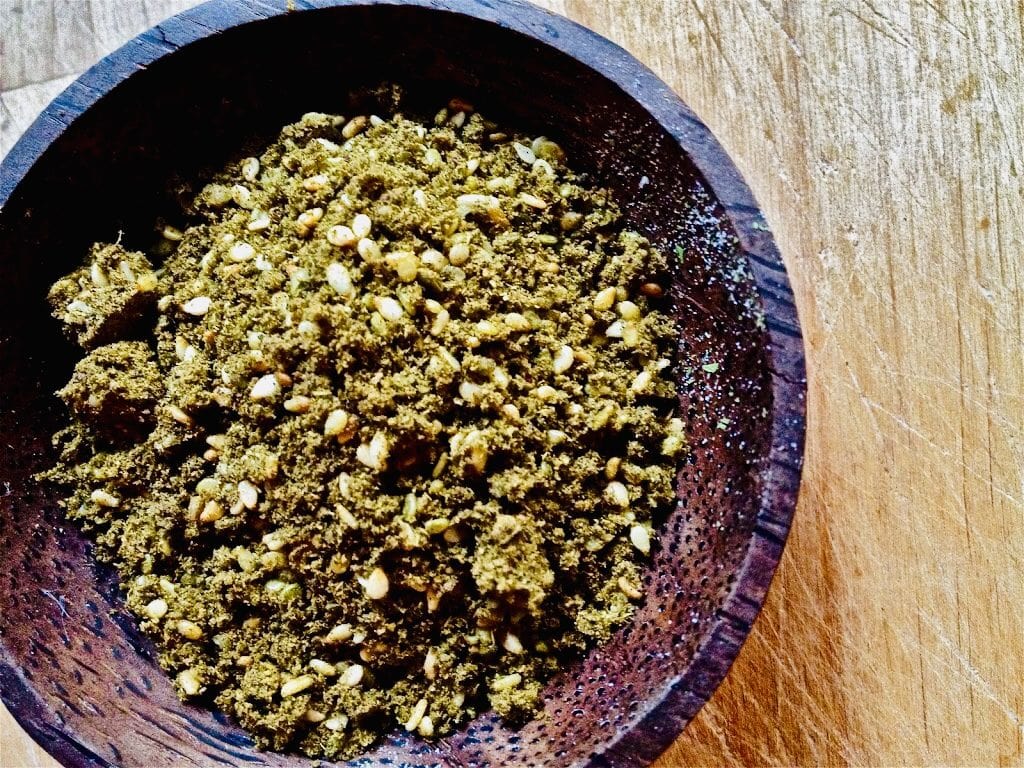 , few things please your beloved Leader – the unparalleled paragon of all culinary virtues that is TFD! – more than delicious spice blends. This one from the Middle East is truly spectacular!

The name za’atar alone most properly applies to Origanum syriacum, considered in biblical scholarship to be the hyssop (Hebrew: אזוב‎ [eˈzov]) of the Hebrew Bible. It is also the name for a condiment made from dried hyssop leaves, mixed with sesame seeds, dried sumac, and often salt, as well as other spices. Used in Levantine cuisine, both the herb and spice mixture are popular throughout the Middle East.

There is evidence that a za’atar plant was known and used in Ancient Egypt, though its ancient name has yet to be determined with certainty.

Remains of Thymbra spicata, one species used in modern za’atar preparations, were found in the tomb of Tutankhamun, and according to Dioscorides, this particular species was known to the Ancient Egyptians as saem.

Pliny the Elder mentions an herb maron as an ingredient of the Regale Unguentum (“Royal Perfume”) used by the Parthian kings in the 1st century CE.

Ezov/za’atar is particularly associated with ritual purity ceremonies, such as preparing the ashes of the red heifer (Numbers 19:6) and handling bodily contaminations (Leviticus 14:4, 6, 51-52; Numbers 20:18). The Children of Israel are also said to have used a clump of ezov/za’atar stalks to daub the blood of the Paschal sacrifice on the doorposts of their houses before leaving bondage in Egypt (Exodus 12:22). King David refers to the purifying powers of the herb in Psalm 51:7, “Cleanse me with ezov/za’atar and I shall be purified.”

Much later, ezov/za’atar appears in the 2nd century CE Mishnah as an ingredient in food at that time in Judea (‘Uktzin 2:2), while elsewhere in the Talmud there is mention of herbs ground into oil (a preparation called mish’cha t’china in Aramaic, משחא טחינא), but it is not specified whether this was like the za’atar mix known today.

In the 12th century Maimonides described the use of the za’atar (צעתר, صعتر) he identified in contemporary cuisine, noting that “the ezov mentioned in the Torah is the ezov that the homeowners eat and season their stews with it.” (Mishneh Torah, Parah Adumah 3:2)

Along with other spiced salts, za’atar has been used as a staple in Arab cuisine from medieval times to the present.

Once used mainly by Arab bakeries, za’atar is now a common herb in Israeli cuisine. Some Israeli companies market za’atar commercially as “hyssop” or “holy hyssop”. Hyssopus officinalis is not found in the wild in Israel, but Origanum vulgare is extremely common.

Za’atar is traditionally dried in the sun and mixed with salt, sesame seeds and sumac. It is commonly eaten with pita, which is dipped in olive oil and then za’atar.

When the dried herb is moistened with olive oil, the spread is known as za’atar-wu-zayt or zeit ou za’atar (zeit or zayt, meaning “oil” in Arabic and “olive” in Hebrew).

This mixture spread on a dough base and baked as a bread, produces manakeesh bi zaatar. In the Middle East, ka’ak (a soft sesame seed bread, known as ka’akh in Hebrew), is sold in bakeries and by street vendors with za’atar to dip into or with a za’atar filling.

Za’atar is used as a seasoning for meats and vegetables or sprinkled onto hummus. It is also eaten with labneh (yogurt drained to make a tangy, creamy cheese), and bread and olive oil for breakfast, most commonly in Jordan, Palestine, Israel, Syria, and Lebanon, as well as other places in the Arab world. The Lebanese speciality shanklish, dry-cured balls of labneh, can be rolled in za’atar to form its outer coating.

The fresh za’atar herb is used in a number of dishes. Borek is a common bread pastry that can be stuffed with various ingredients, including za’atar. A salad made of fresh za’atar leaves (Arabic: salatet al-zaatar al-akhdar) is also popular throughout the Levant. The recipe is simple, consisting of fresh thyme, finely chopped onions, garlic, lemon juice, olive oil and salt.

A traditional beverage in Oman is za’atar steeped in boiling water to make an herbal tea.

, I urge you to indulge your senses and make my version of this classic spice blend! It draws from all over the Middle East and is ruthlessly authentic. 🙂 You can buy the proper wild thyme, hyssop, Turkish oregano and spicy salt at the apropos links.