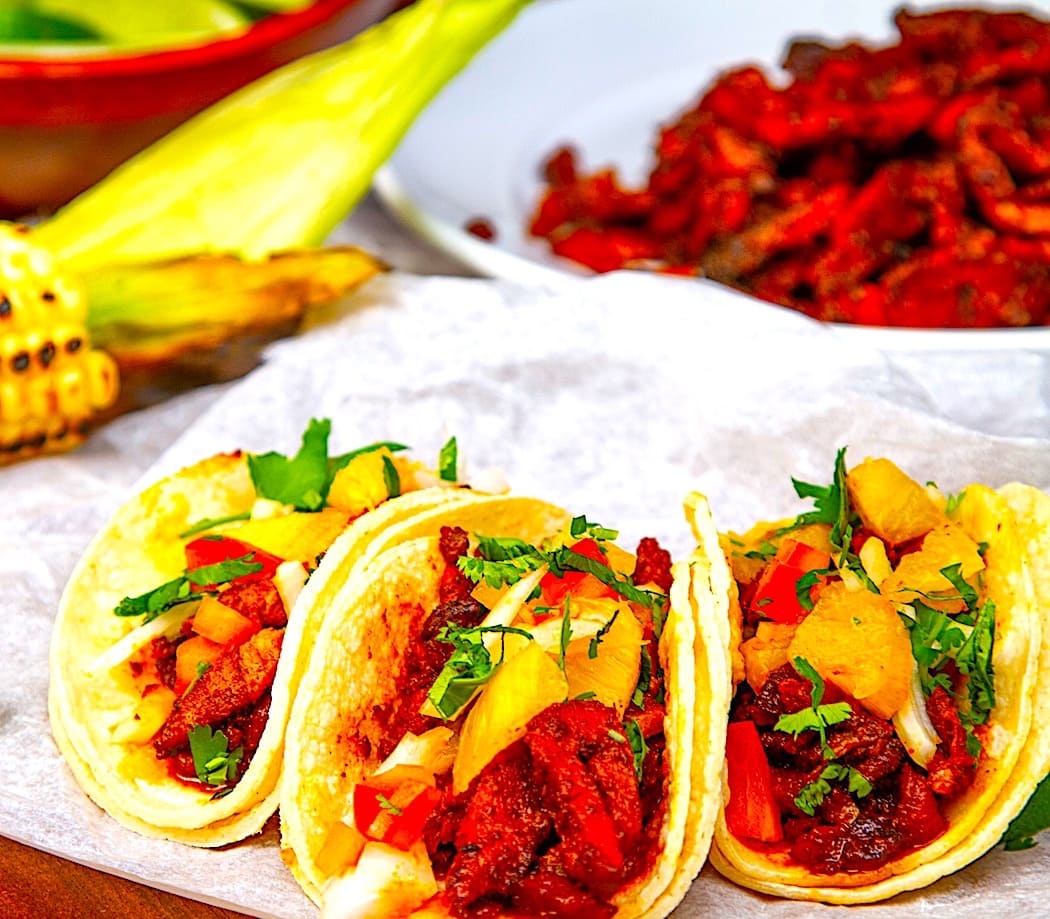 My Citizens, there can be no denying the fundamental truth that the Potentate of Pork – YOUR TFD – swoons over all meals porcine, and there is probably no dish I find as intensely satisfying in this regard as the mighty tacos al pastor! The origin of this delicious taste of Mexico City is, however, most assuredly NOT Mexican! Confused? Fear not, for the soothing balm of culinary knowledge will assuage that which afflicts your tortured psyche, delivered straight to the collective cerebral cortex of TFD Nation by yours truly! 😀

So, why exactly isn’t this dish of Mexican origin, you ask…simply because it actually has its origins in the far-off Mediterranean shores of Lebanon! Yes, Lebanon – and that small country has given Mexico any number of great things, the top two of which are al pastor and Salma Hayak, who is half Lebanese, half Mexican – just like this dish, in fact!

The name ‘al pastor’ means ‘in the style of the shepherds’, and that name is a clue to the dish’s origin. Starting in the 1890s, there was a huge influx of immigrants to Mexico from what is now the modern country of Lebanon. In the decades that followed, more than 100,000 Arab-speaking Lebanese immigrants came to Mexico, bringing with them their own cuisine and recipes.

One of these dishes was the Shawarma, also called Döner or Gyro. It consisted of thinly sliced meat, usually lamb, that was roasted on a slowly-turning vertical spit. The Mexican population adopted the delicious dish to use their preferred pork instead of lamb, but since the majority of the immigrants were shepherds, the locals named it after them: tacos al pastor. Today, the al pastor meat is still properly cooked on a vertical spit, with pineapples on top dripping their sweet juices down onto the meat as it cooks

As eruditely summarized on theculturetrip.com:

The history of this quintessential Mexican dish dates back to the early 1900s when Lebanese immigrants ended up settling in the state of Puebla, just a few hours south of Mexico. No one can verify the exact date, but around 1930 the first vertical roasting spit appeared in Puebla, thought to have been brought by some of those recent immigrants.

The trompo, as it’s called in Mexico, was the same type of spit used across the Asian continent from Indian to Greece to cook marinated lamb meat. The roasted lamb was then served in a type of bread that varied culture to culture, the most common we know of today, is the pita.

In Puebla the Antigua Taquería La Oriental and Tacos Arabes Bagdad claim to be the creators of this dish – both were founded in 1933. The original version of these “tacos arabes” lacked the complex mix of spices and natural coloring agents used in tacos al pastor today.

Nowadays it’s thinly sliced pork – not lamb – that’s marinated in a variety of spices that could include ground achiote seeds or paste, ground red chiles, and various other herbs.

Each taquero makes his or her marinade just a little bit different, some even add orange juice or Coca-Cola – it’s very secretive business. The pork meat is mainly lomo (loin) or pierna (leg) but it must be interspersed with layers of fattier cuts like pescuezo (neck), shoulder or breast for just the right tenderness.

The original version of tacos al pastor also didn’t include chopped cilantro and onion OR a slice of pineapple on top. Where did the pineapple come from?

While a combination of meat and fruit is common in many different cuisines, giving dishes a sweet and savory vibe, the original “tacos arabes” or “tacos orientales‘ in mexico didn’t have it. El Tizoncito, one of Mexico City’s most famous taquerías, claims that they invented this addition and so far no one has been able to dispute them.

Tacos al pastor are traditionally served with a smoky chipotle salsa, but these days, anything goes, and you can add whatever salsa suits your fancy.

In Mexico City, the oldest taquería serving tacos al pastor is Huequito, which was founded in 1950. Another famous favorite is El Vilsito, open from 8pm-3am in a what is during the daytime a mechanic shop. In daylight hours you can find great tacos al pastor at Los Parados in Colonia Roma – though any time of day is a good time for tacos al pastor.

Since the vast majority of us lack the proper vertical, self-rotating spit to cook a real al pastor, we must make do at home with grilling, which is to be quite honest a most effective technique indeed. To make this dish properly, you need a few specific ingredients – my favorite achiote paste (assuming you don’t want to make my version in a quantity sufficient for a whole roast pig!) here, top-quality guajillo and ancho peppers here and here, Mexican oregano (not the same as what’s in your spice cabinet, trust me!) here, and my favorite brand of chipotles en adobo here.

An important note – please use only CANNED pineapple juice in this recipe! You may be tempted to use fresh, but trust me, this would be a major error. Fresh pineapple juice still contains enzymes that will break down your pork and more likely to leave it mushy in a short amount of time. The canned version doesn’t have the enzyme, so it is a rare example of canned being better than fresh.

, care for or wish to impress at your earliest possible convenience! 😀