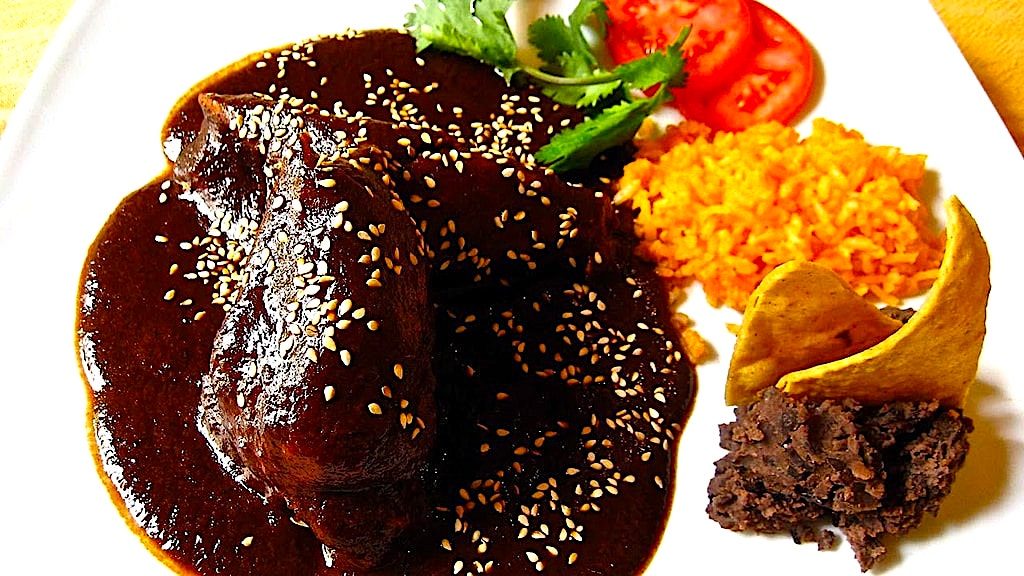 My Citizens, I am very pleased to note that the Suzerain of Spice – YOUR TFD! – has an equally sweet side to Him as well, and this rare recipe for Xico Mole from the Mexican state of Veracruz satisfies both parts of me equally and to my greatest satisfaction!

As noted very eruditely on survivingmexico.com:

Mole (pronounced moe-lay) comes from the Nahuatl word mōlli (sauce) or chīlmōlli (chile sauce). There are some misconceptions here that mole is only the brown chocolate sauce that in Mexico is called mole poblano. As you will see, mole comes in quite a variety of delicious flavors, all of which have chiles rather than chocolate as the common ingredient.

There are several legends about the origin of mole. One is that the nuns at the Convent of Santa Rosa is Puebla were in a lather about the visit of the archbishop. They rustled up what ingredients they had on hand and dumped it all in a pot to simmer. They killed the old turkey wandering around the yard too. When the archbishop arrived, they served poor ol’ Tom turkey smothered in the sauce made from leftovers. When asked, the nuns declared that they had made “mole” (a mix).

Then there is the legend that the monk Fray Pascual invented the dish, again to serve to the archbishop, or maybe it was the viceroy, there seem to be several versions. While the monk was preparing the meal, a sudden wind knocked over the spices into the pots where the turkey was simmering magically creating mole.

I say, poppycock! Mole predates the Spanish invasion in Mexico. Bernardino de Sahagun writes about mollis being used in a number of indigenous dishes in his work General History of the Things of New Spain. A popular Aztec dishes of the time was the totolmolli (turkey hen or chicken in mole sauce).

Where doubt sets in is in the use of chocolate in the sauce. Both the Aztecs and Mayans considered chocolate sacred. Therefore, it was reserved for the highest level priests and royalty. Thus, to include chocolate in a dish for the common people would have been considered sacrilege. That doesn’t mean that there were NO sauces with chocolate, only that they were not served to those who were not priests or royalty. Perhaps Cortes was fortunate enough to be served chocolate mole as he was considered a reincarnation of the god Quetzalcoatl and the recipe got out. We may never know.

Up until recently, mole was the standard dish eaten at celebrations of all social economic classes in Mexico. The expressions Ir a un mole (to go to where there is mole) means to attend a wedding, one of the traditional ceremonies that customarily served mole. Nowadays, the upper classes have stopped preparing and eating it, preferring imported foodstuff to traditional at their parties. This is yet another loss in the ongoing processes of colonization. Language, food, and customs are insidiously being replaced. Women no longer learn the art of cooking mole from their mothers. Mothers no longer teach their daughters.

In a few remaining places, the preparation of mole is still a community event, usually in honor of a patron saint or local holiday. In these communities, each person involved has a part to play in the production, much like the tamaladas that gather to make tamales. There is always one person, usually a woman, who is given the honorary position of molera, the head chef. It is she who makes the final determination on how much of each ingredient is to be used.

That is no easy task. Mole poblano has about 20 different ingredients. Oaxacan moles can have more than 30. Recipes are approximate, variations are practically limitless. But, under the direction of the molera, the ritual of the mole is not lost.

This mole is originally from the town of Xico, in Veracruz. This beautiful location, situated in the center of the state of Veracruz, was designated “Magical Village” in 2011 and it keeps all the colonial charm of the province, surrounded by mountains and large coffee plantations. Its gastronomy is extensive and its most famous and typical preparation is the mole from Xico.

This mole is similar to the Puebla style mole, but the combination of its ingredients turn out into a sweeter salsa than the traditional mole – but equally delicious and complex in flavors and aromas. In fact is the sweetest mole there is within the large mole repertoire that exists in Mexico.

Traditionally it is served with pieces of cooked turkey or chicken; and accompanied with some refried beans and Mexican rice. It is also typical of the region to use this mole in enchiladas or chicken tacos.

As noted by legendary Mexican chef Diana Kennedy, whose recipe is the foundation for mine:

If you talk to anyone about Xico, they invariably ask if you have eaten the mole. It is famous surprising, since it is Sweetish and very gentle, certainly not for those who like their food picante.

I have eaten and been given several recipes in Xico but finally agree with my friend Carmen Ramirez Degollado that the recipe for mole de Xico printed in La Cocina Veracruzana (sadly, an out-of-print limited edition printed privately under the sponsorship of an ex-governor of Veracruz) is the most representative: she serves it in her restaurant El Bajio in Mexico City.

Of course, it is a refined mole and only for those who can afford the expensive ingredients of pine nuts and hazelnuts. For those who can’t, peanuts serve as a substitute. When you go to the trouble of making mole, it is best to make more than you will use. It keeps for at least a month in the refrigerator and freezes for a much longer period.

Possibly the most difficult about this recipe is getting the xoconostle, a fruit that cannot be replaced. Xoconostle (Opuntia matudae) are the sour fruit from a particular variety of cactus. Unlike sweet prickly pears (or tunas, as they’re called in Mexico), xoconostle (show-ko-nost-lay) are naturally sour. While virtually impossible to find it fresh in this country, you can buy it dried here – simply reconstitute it in water before using.

This is a unique and truly delicious mole that I hope you will see fit to sample for yourselves firsthand, Citizens!

Add
174shares
TFD uses cookies and we comply with GDPR so you control your personal info! If you continue on, we will assume you are happy with this, Citizen! OkNoRead more