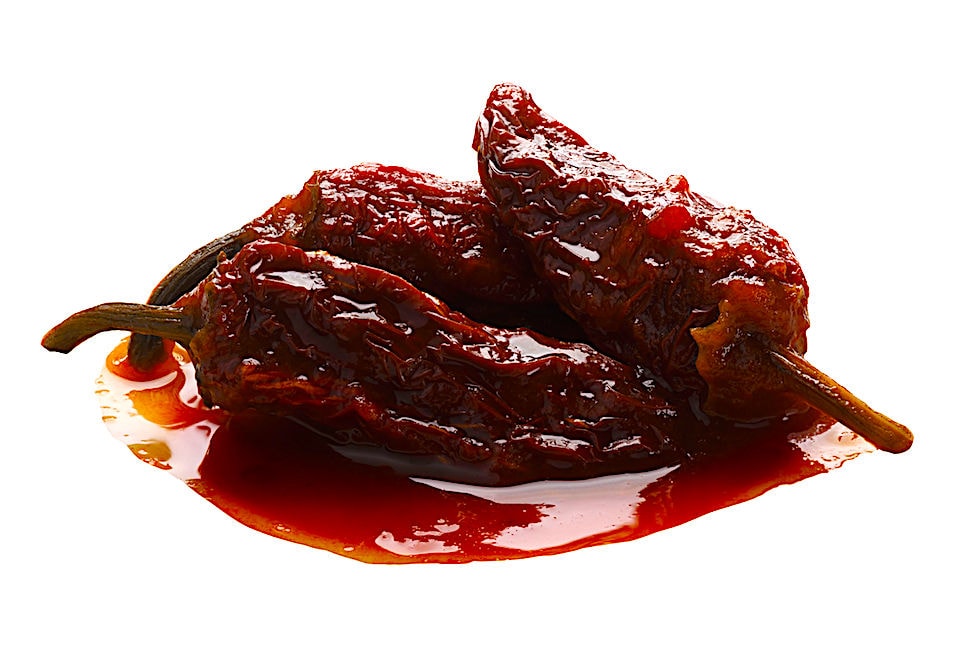 Citizens, your asbestos-palated Generalissimo – the always spicy TFD! – is exceedingly fond of the Mexican staple of Chipotle peppers preserved in Adobo sauce! While there are decent versions available pre-made, I encourage you to try making them on your own, as it is not difficult and with a superior flavor!

Adobo or Adobar (Spanish: marinade, sauce, or seasoning) is native to Iberia, namely Spanish cuisine and Portuguese cuisine. It was widely adopted in Latin America and other Spanish and Portuguese colonies, including the Azores and Madeira.

One of the earliest references to Adobo is found in the “Manual del Cocinero, Repostero, Pastelero, Confitero Y Bottilera” by Mariano de Rementeria y Fica in 1850.

In the years following the discovery of the new world, meat and fish started to be preserved by new methods. A low temperature facilitated the preservation of food, but the weather often did not provide low temperatures ideal for preservation, so it was necessary to apply other techniques, such as adobo.

Traditional preparations were created with the intent of flavoring, such as cazón en adobo (dogfish in adobo, made from school shark and originating from Cadiz, a city in the Cádiz province of Spain); berenjenas de Almagro (Almagro aubergine, a pickled aubergine characteristic of “Manchega” cuisine from the Castile-La Mancha region of Spain, specifically from Almagro, a city in the Ciudad Real province of Spain); and lomo en adobo (tenderloin of beef or pork in adobo).

The noun form of adobo describes a marinade or seasoning mix. Recipes vary widely by region: Puerto Rican adobo, a rub used principally on meats, differs greatly from the Mexican variety. Meat marinated or seasoned with an adobo is referred to as adobado or adobada.

Adobo relates to marinated dishes such as chipotles en adobo in which chipotles (smoked ripe jalapeño peppers) are stewed in a sauce with tomatoes, garlic, vinegar, salt, and spices. The spices vary, but generally include several types of peppers (in addition to the chipotle and most likely those on hand), ground cumin and dried oregano. Some recipes include orange juice and lemon or lime juices. They often include a pinch of brown sugar just to offset any bitter taste.

A chipotle or chilpotle, which comes from the Nahuatl word chilpoctli meaning “smoked chili”, is a smoke-dried jalapeño. It is a chili used primarily in Mexican and Mexican-inspired cuisines, such as Mexican-American, Tex-Mex, and Southwestern dishes.

A chipotle’s heat is similar to that of the Espelette pepper, jalapeño, Guajillo chili, Hungarian wax pepper, Anaheim pepper, and Tabasco sauce.

Jalapeño varieties vary in size and heat. In Mexico, the jalapeño is also known as the cuaresmeño and gordo. Until recently, chipotles were largely found in the markets of central and southern Mexico.

Typically, a grower passes through a jalapeño field many times, picking the unripe, green jalapeños for market.

At the end of the growing season, jalapeños naturally ripen and turn bright red. In Mexico and the United States, there is a market for ripe red jalapeños. They are kept on the bush as long as possible. When they are deep red and have lost much of their moisture, they are picked to be made into chipotles. Pineapple vinegar adds a Pueblo, Mexico touch to my recipe, buy it here.

They are moved to a closed smoking chamber and spread on metal grills, but in recent years, producers have begun using large gas dryers. Wood is put in a firebox, and the smoke enters the sealed chamber. Every few hours the jalapeños are stirred to mix in the smoke.

They’re smoked for several days, until most of the moisture is removed. In the end, the chipotles are dry like prunes or raisins. The underlying heat of the jalapeños combines with the taste of smoke. Typically, ten pounds of jalapeños make one pound of chipotles after being thoroughly dried.

Whereas moritas from Chihuahua are purple in color, chile meco is tan/grey in color and has the general appearance of a cigar butt. Most chipotles found in the United States are of the morita variety. Almost all of the chipotle meco is consumed in Mexico.

I hope you enjoy my version of this classic recipe, Citizens! 😀