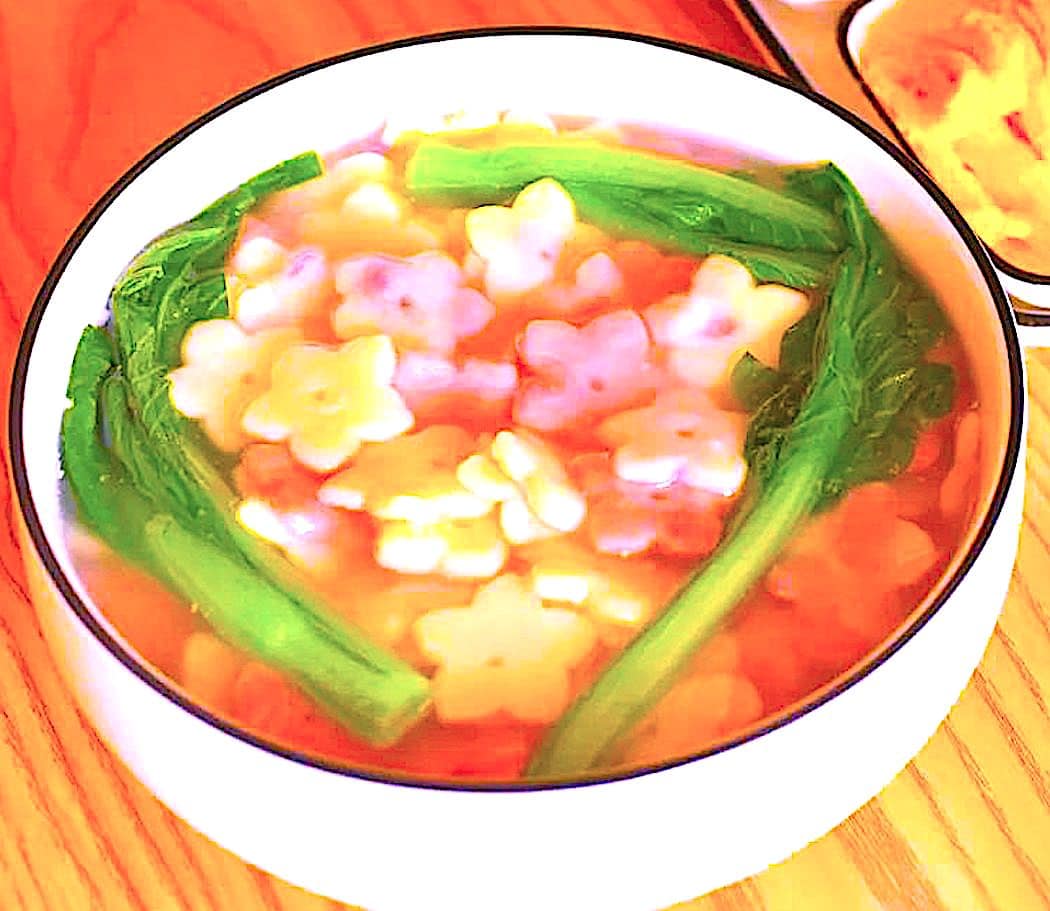 My Citizens, I give you the final post in our week of Medieval recipes ending where civilization was perhaps at its shining peak during this period – China! Yes, while Europe was basically making mud pies and drawing cartoon figures in place of high art, China had the Tang and Song Dynastic periods – truly the zenith of ancient Chinese civilization, IMHO! During the Song Dynasty in particular, nobility enjoyed the pleasures of subtly-flavored gastronomic creations like ‘Plum Blossom Soup’!

There are a multitude of existing restaurant and tavern menus and listed entrées for feasts, banquets, festivals, and carnivals during the Song period, all of which reveal a very diverse and lavish diet for those of the upper class.

In their meals they could choose from a wide variety of meats, including shrimp, geese, duck, mussel, shellfish, fallow deer, hare, partridge, pheasant, francolin, quail, fox, badger, clam, crab, and many others.

Dairy products were absent from Chinese cuisine and culture altogether, beef was rarely consumed since the bull was a valuable draft animal, and dog meat was absent from the diet of the wealthy, although the poor could choose to eat dog meat if necessary (yet it was not part of their regular diet).

As further elucidated on radiichina.com:

How do you make a bowl of delicious Song Dynasty pebble soup? Easy. You pick eleven or twelve little white pebbles from a flowing stream — making sure they have moss on them. Then add a scoop of spring water, and simmer until it turns into a broth that tastes “as sweet as escargot” with a hint of spring rain.

This is an actual recipe taken from the pages of Shanjia Qinggong 《山家清供》, the most iconic cookbook of the Song Dynasty (960-1279 CE). While the author may have gotten carried away with the occasional dish — at least by modern standards — the book covered a wide range of what were then seen as simple and nutritious recipes. Ingredients were always seasonal, usually grown on the mountains, and prepared in a way that was both minimal and poetic.

We learn that pork was for commoners, the imperial court loved sashimi, and the well-educated admired clean, minimal, healthy food. And waimai — ordering delivery — was just as common as it is today.The emperor was known to consistently order waimai, especially when the aromas of street food reached his nostrils and made him nostalgic.

It’s far from the first time in history that our civilization has prized seasonally-sourced ingredients, either. Song society valued it immensely; it’s where we get the Chinese phrase “bu shi bu shi” (“not seasonal, not good to eat,” 不时不食).

One of author Xu Li’s favorite recipes is plum cake soup (梅花汤饼 meihua tangbing). What could have easily been a simple dough soup in chicken broth was then infused with plum and sandalwood water to create a subtle aroma, with dough sliced into the shape of plum flowers. This reflected how much litterateurs of the day adored and appreciated white plums.

Yes, this is in fact chicken noodle soup, taken to a level of refinement, elegance and subtlety as you’ve never seen! With the addition of a few stalks of Yu Choy or scallion for garnish, the poetic mind interprets the bowl as a Plum Orchard in full bloom!

This soup survives into the present day, though unless you live near a plum orchard, you aren’t going to be decorating this soup with either Plum petals or fresh plum juice as of old! I have come up with a simple and elegant solution – plum saké! This provides the perfect hit of plum plus a refreshing lick of alcohol to the soup. Sandalwood in its raw form is no longer necessary now that top-quality sandalwood edible oil is available from here.

To stamp out the plum flower shapes, these cookie cutters are perfect and if you want to turn the dough pink in the traditional fashion (with strong health benefits to boot!) try the red yeast rice here or just use a few drops of red food coloring in the dough to turn the necessary part pink. I have scented the noodle dough as opposed to the soup so the subtle aromas are trapped and can be fully enjoyed as you bring a spoonful to your mouth.

Citizens, it is fitting and proper that we end our promenade through the Medieval world with a healthy bowl of chicken noodle soup, served as only the nobility of the Song would have appreciated – and how the Imperial Dragon that ALONE is TFD prefers! Enjoy this with the equally subtle Hirshon Imperial tofu for a meal worthy of an aesthete possessed of a most refined palate!