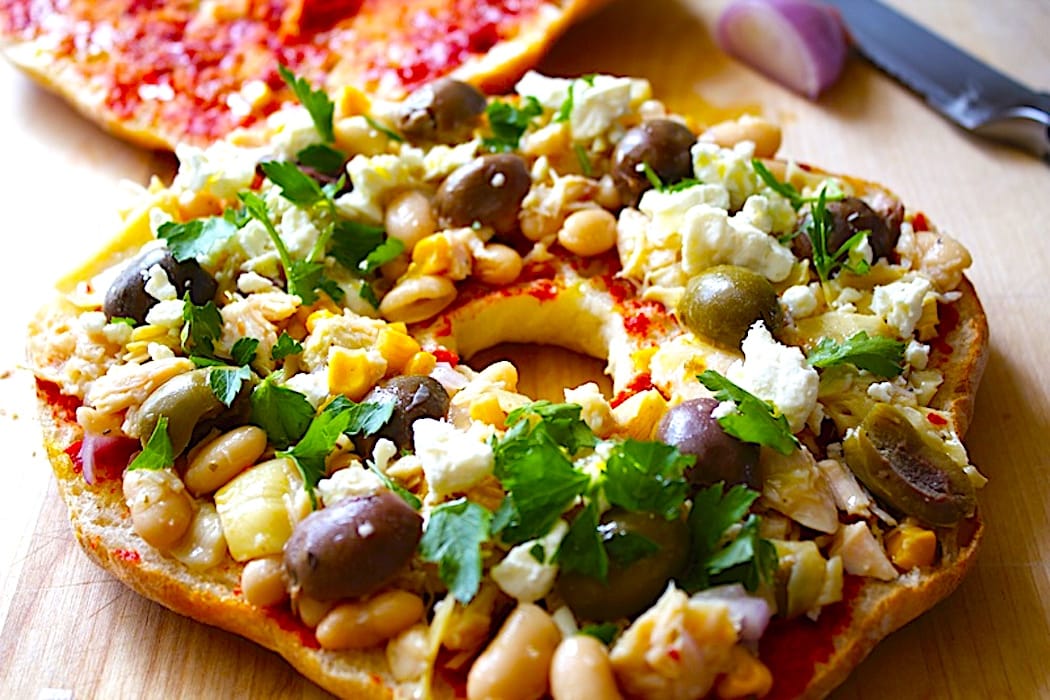 , let us begin with the fact that  I dearly love Maltese food, and this tuna sandwich from the country truly is amongst the ne plus ultras of the genre! The humble tuna sandwich holds much psychological relevance for the Transcendent One – my happiest memory as an 8 year-old child was when my mother made me a tuna sandwich right after we had just moved and I was inconsolable until that meal. Ever since, tuna sandwiches have been my go-to comfort food whenever I am feeling less than stellar – sadly, at the moment, this is one of those times and my melancholic soul craves the solace of this childhood treat.

If you are unaware, the islands of Malta lie 80 km (50 miles) south of Sicily in the Mediterranean sea. This tiny country is formed by the islands of Malta, Gozo and Comino and a few smaller uninhabited rocks, making it one of the smallest and most densely populated countries in the world! For example, the island of Malta (which is the largest of them all) is still very small – only 28 x 13km / 17 x 8 miles! Malta’s beautiful baroque capital is called Valletta and is a UNESCO World Heritage city.

The Maltese language can be a difficult one to both learn and pronounce, as it is based on an Arab dialect that developed in Sicily and Malta between the 9th and 12th centuries A.D. For example, the ż in the recipe title is NOT pronounced like a standard z in English, but in a unique fashion specific to Maltese. In fact, allow the Philological Figure who ALONE is TFD to share the background of this most unique language before we dive into today’s recipe!

Adding to the difficulties in learning the language, Maltese is descended from Siculo-Arabic, which developed as a Maghrebi Arabic dialect during the Emirate of Sicily between 831 and 1091. As a result of the Norman invasion of Malta and the subsequent re-christianization of the island, Maltese evolved independently of Classical Arabic in a gradual process of Latinization. It is therefore exceptional as a variety of Arabic that has no relationship with Classical or Modern Standard Arabic. Maltese morphology has been deeply influenced by Romance languages, namely Italian and Sicilian.

The original Arabic base comprises around one-third of the Maltese vocabulary, especially words that denote basic ideas and the function words, but about half of the vocabulary is derived from standard Italian and Sicilian; and English words make up between 6% and 20% of the vocabulary. However, rural dialects of Maltese show more similarities to the original Siculo-Arabic ancestor as compared to Standard Maltese.

The origins of the Maltese language are attributed to the arrival, early in the eleventh century, of settlers from neighboring Sicily, where Siculo-Arabic was spoken, following the Fatimid Caliphate’s conquest of the island at the end of the ninth century. This claim has been corroborated by genetic studies, which show that contemporary Maltese people share common ancestry with Sicilians and Calabrians, with little genetic input from North Africa and the Levant.

The Norman conquest in 1091, followed by the expulsion of the Muslims—complete by 1249—permanently isolated the vernacular from its Arabic source, creating the conditions for its evolution into a distinct language. In contrast to Sicily—where Siculo-Arabic became extinct, replaced by Sicilian—the vernacular in Malta continued to develop alongside Italian, eventually replacing it as official language in 1934 – alongside English. The first written reference to the Maltese language is in a will of 1436, where it is called lingua maltensi. The oldest known document in Maltese, Il-Kantilena (Xidew il-Qada) by Pietru Caxaro, dates from the 15th century.

An early manuscript dictionary, Dizionario Italiano e Maltese, was discovered in the Biblioteca Vallicelliana in Rome in the 1980s, together with a grammar, the Regole per la Lingua Maltese, attributed to a French Knight named Thezan. The first systematic lexicon is that of Giovanni Pietro Francesco Agius de Soldanis, who also wrote the first systematic grammar of the language and proposed a standard orthography.

Now that my ethno-linguistic diatribe is finished, let’s get to the recipe at hand, shall we? 😀

This Maltese sandwich is made with slices of ftira sourdough bread (which resembles a bagel), is smeared with kunserva (tomato paste), drizzled with olive oil, and then enjoyed with a variety of flavorful and toothsome toppings. These traditionally include canned tuna, ġbejna sheep cheese, fresh tomatoes, pickled vegetables, bigilla mashed beans spread, onions, olives, and capers. Being Malta’s number one snack, hobż biż-żejt can be found in almost every eatery in the country.

To get this sandwich ruthlessly authentic, as promulgated in the TFD manifesto, it will be necessary to make the components of this sandwich from scratch. Fear not, , for while this may seem like a ludicrous amount of work for a tuna sandwich, I promise it will be the BEST you’ve ever experienced outside of Malta itself (and perhaps even IN Malta!).

You can buy jarred cannellini of top quality here, high protein bread flour here, top-quality tuna here, sheep milk ricotta here, and the best anchovies on the planet here. I have cobbled together this recipe from several individual recipes as noted in the instructions, plus a sprinkling of TFD magic in the ingredient choices and ratios.

Join me as I recapture mental equilibrium and reclaim the lost peace of childhood, !