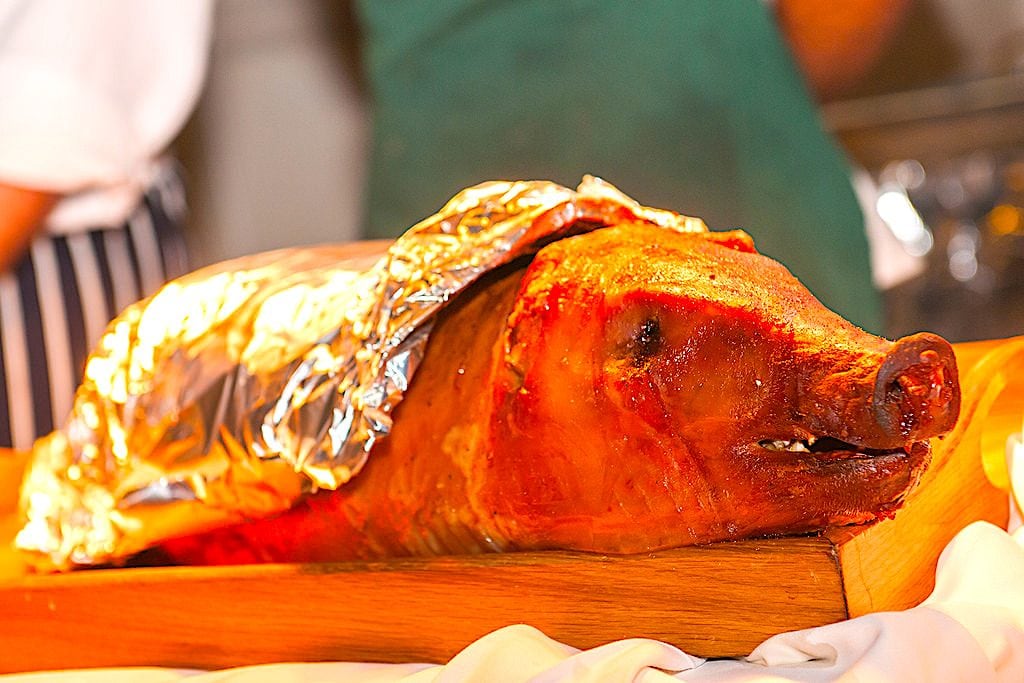 My Citizens, tremble in abject wonder and gustatory pleasure as we move on to the 3rd recipe in our week of the “Divine Swine”, in celebration of the Chinese New Year of the Earth Pig! For this post, we are off to a land replete with mystery and Hollywood magic – the proud and very ancient country of Malta! Hollywood, you say – yes, as who can resist the stuff dreams are made of?

I speak, of course, of the black bird from The Maltese Falcon, which drives the plot of the classic 1941 film noir (one of my favorites!) starring Humphrey Bogart as hard-boiled private detective Sam Spade. There is quite the mystery around the statues used in the film, by the way! 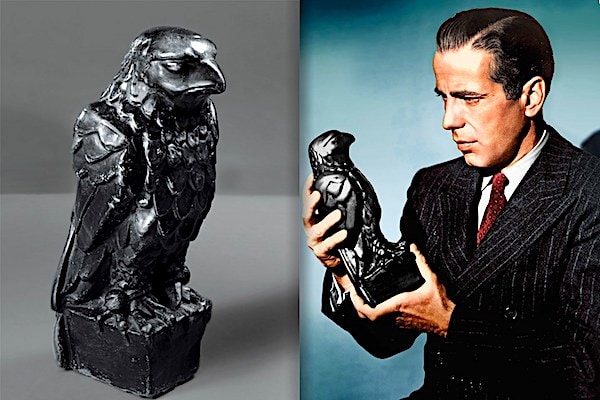 In Dashiell Hammett’s story, the Maltese Falcon is a golden statue encrusted with gemstones that was made in the 1530s by the Knights of Rhodes as a gift for Holy Roman Emperor Charles V to thank him for giving them the island of Malta. The falcon was lost on the way. It traded hands many times over the centuries, getting a coating of dull black enamel at some point to disguise its obvious value.

There were several “prop statues” made for the film – one of the birds was given to actor William Conrad by studio head Jack Warner. It was sold at auction in 1994 after Conrad’s death.

Jeweler Ronald Winston, son of Harry Winston, bought it for $398,500 (a record price for a movie prop at that time) and used it as the model to make the bird all the crooks in the story dream of.

The Winston falcon is made out of 10 pounds of gold, has cabochon Burmese ruby eyes and two sets of interchangeable claws, one gold, one coral. From its beak hangs a platinum chain with a 42-carat diamond. It took two years to make and cost $8 million. It was displayed at the 69th Academy Awards in 1997. 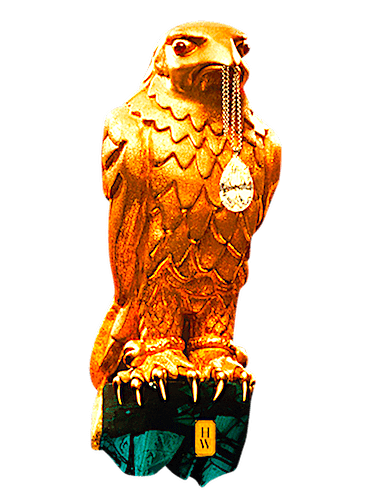 As for Malta, officially known as the Republic of Malta (Maltese: Repubblika ta’ Malta), it is a Southern European island country consisting of an archipelago in the Mediterranean Sea. It lies 80 km (50 mi) south of Italy, 284 km (176 mi) east of Tunisia, and 333 km (207 mi) north of Libya.

With a population of about 475,000 over an area of 316 km2 (122 sq mi), Malta is the world’s tenth smallest and fifth most densely-populated country. Its capital is Valletta, which is the smallest national capital in the European Union by area at 0.8 km.2 The official languages are Maltese and English, with Maltese officially recognised as the national language and the only Semitic language in the European Union.

Malta has been inhabited since approximately 5900 BC. Its location in the centre of the Mediterranean has historically given it great strategic importance as a naval base, with a succession of powers having contested and ruled the islands, including the Phoenicians, Carthaginians, Romans, Greeks, Byzantines, Arabs, Normans, Sicilians, Spanish, Knights of St. John, French, and British.

Most of these foreign influences have left some sort of mark on the country’s ancient culture.

Malta became a British colony in 1815, serving as a way station for ships and the headquarters for the British Mediterranean Fleet. It played an important role in the Allied war effort during the Second World War, and was subsequently awarded the George Cross for its bravery in the face of an Axis siege, and the George Cross appears on Malta’s national flag.

The British Parliament passed the Malta Independence Act in 1964, giving Malta independence from the United Kingdom as the State of Malta, with Queen Elizabeth II as its head of state and queen. The country became a republic in 1974. It has been a member state of the Commonwealth of Nations and the United Nations since independence, and joined the European Union in 2004; it became part of the eurozone monetary union in 2008.

Malta has a long Christian legacy and its Archdiocese is claimed to be an apostolic see because Paul the Apostle was shipwrecked on “Melita”, according to Acts of the Apostles, which is now widely taken to be Malta. While Catholicism is the official religion in Malta, Article 40 of the Constitution states that “all persons in Malta shall have full freedom of conscience and enjoy the free exercise of their respective mode of religious worship.”

Maltese cuisine reflects Maltese history; it shows strong Italian and English influences as well as Spanish, French, Maghrebin, Provençal, and other Mediterranean cuisines. Having to import most of its foodstuffs, being positioned along important trade routes, and having to cater for the resident foreign powers who ruled the islands, opened Maltese cuisine to outside influences.

Italian (specifically Sicilian), Middle Eastern and Arabic foods exerted a strong influence, but the presence in Malta of the Knights of St John and, more recently, the British brought elements from further afield.

The Knights hailed from many European countries; particularly, France, Italy and Spain. The Knights’ contacts and wealth brought also food from the New World; it has been suggested that Malta may have been one of the first countries in Europe (after Spain) where chocolate was first tasted.

The British military presence meant a market of a garrison and their families and, later, mass tourism from the UK. British food products, condiments and sauces like English mustard, Bovril, HP Sauce and Worcestershire sauce are still a subtle but pervasive presence in Maltese cooking. Other imports were only nominal.

The popularity of pork and its presence in various dishes could be attributed to Malta being on the edge of the Christian world. Consuming a food which is taboo in the Muslim culinary culture could have been a way of self-identification by distinguishing oneself from the other.

In addition to pork dishes (such as grilled pork cuts or stuffed flank) and the exclusive predominance of pork in indigenous Maltese sausages, adding some pork to dishes such as kawlata (a vegetable soup) and ross il-forn (baked rice) has been common practice in the Maltese vernacular cuisine for centuries.

Maltese LOVE their roast pig feasts, known in their language as Majjalata – “Hog Roast”. The majjalata is the traditional Maltese hog roast and represents one of the most characteristic culinary activities on the island.

For this occasion, people gather together for a dinner of which the main course is delicious roast whole suckling pig. In addition to pork, the meal may also include other typical Maltese specialities (e.g. ravjul, timpana, ross fil-forn, etc.) The majjalati are very common in the rural areas and Gozo.

Finding a recipe for this proved very difficult, but I finally found one at michaelbonnici.blogspot.com – it became the foundation for my version. As always, I have tweaked it to my satisfaction and include instructions for doing it up not only in the oven (yes, this piglet is small enough to fit in an oven!) or to use a spit and pit, as noted in my directions here.

You can find the rare dried wild thyme flowers here and olive wood charcoal briquettes (if making outdoors) here. The high mountain olive wood chunks for smoking may be purchased here. Following my directions, you will enjoy a pig worthy of the Maltese Falcon’s own stellar reputation and just as rich! 😀