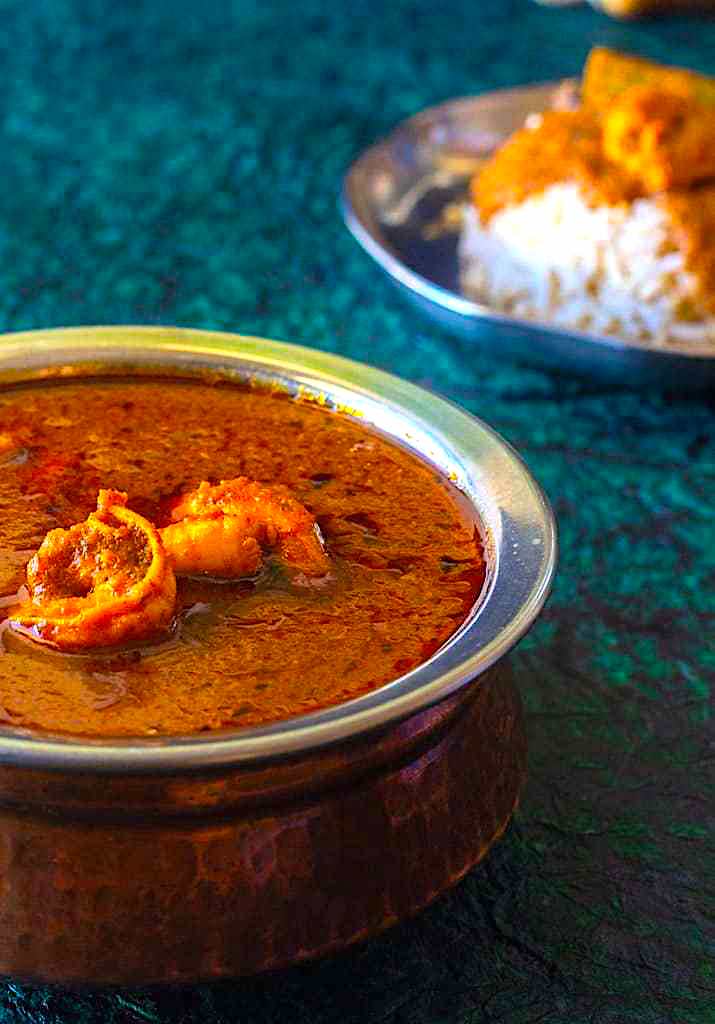 My Citizens, the limpid and pure love that the Suzerain of Spice – YOUR TFD! – feels for all things curried is truly beyond measure, and this delicious recipe from the Indian state of Maharashtra is definitely one of my most beloved!

Shrimp are already one of my favorites, and add in a unique masala blend endemic to the region and you get a potently-flavored main dish truly worthy to grace any table – in any home – of any member of TFD Nation! I am honored to share my take on this seminal recipe and hope you see fit to sample its savory delights forthwith!

Maharashtrian or Marathi cuisine is the cuisine of the Marathi people from the Indian state of Maharashtra. It has distinctive attributes, while sharing much with other Indian cuisines. Traditionally, Maharashtrians have considered their food to be more austere than others.

Maharashtrian cuisine includes mild and spicy dishes. Wheat, rice, jowar, bajri, vegetables, lentils and fruit are dietary staples. Peanuts and cashews are often served with vegetables. Meat was traditionally used sparsely or only by the well off until recently, because of economic conditions and culture.

The urban population in Maharashtrian cities such as Mumbai, Pune and others has been influenced by cuisine from other parts of India and abroad. For example, the Udupi dishes idli and dosa, as well as Chinese and Western dishes, are quite popular in home cooking, and in restaurants.

Since they occupy a vast area with distinct geographical differences and food availability, the Marathi people from different regions have produced a diverse cuisine. The diversity extends to the family level because each family uses its own unique combination of spices and ingredients.

The majority of Maharashtrian residents are not averse to eating meat, fish and eggs, however, the staple diet for most people is mostly lacto-vegetarian. Many communities such as the brahmins, or the varkari sect members only follow the lacto-vegetarian diet.

The traditional staple food on Desh (the Deccan plateau) is usually bhakri, spiced cooked vegetables, dal and rice. However, North Maharashtrians and urbanites prefer roti or chapati, which is a plain bread made with wheat.

In the coastal Konkan region, rice is the traditional staple food, typically combined with seafood. Wet coconut and coconut milk are used in many dishes. Marathi communities indigenous to Mumbai and North Konkan have their own distinct cuisine.

In the Vidarbha region, little coconut is used in daily preparations but dry coconut and peanuts are used in dishes such as spicy savjis, as well as in mutton and chicken dishes typical of Maharashtrian cuisine.

This particular dish uses a unique masala spice mixture that I first discovered on tarladalal.com – I have tweaked it to my especial tastes, of course. The dish – like so many flavorful recipes from India – calls for the use of fresh curry leaves. These aren’t easy to find – at all – in the U.S. unless you are fortunate enough to live near a proper Indian grocery store. Fortunately, top-quality fresh leaves may be easily purchased over the Internet from here.

Another absolutely critical spice needed for this recipe is uncut asafoetida, which is an EXTREMELY odiferous (smelling strongly of garlic) dried sap that is powdered and used in minute quantities in many Indian dishes. Virtually all of the powdered asafoetida sold in this country is cut with fillers to reduce the smell and stretch the profit margin – avoid it. Instead, do as any true Indian would and buy the still whole lumps of the crystallized resin and grind it yourself in a spice grinder or mortar and pestle dedicated to the task!

Buying top-quality asafoetida from this source will assuredly provide you with enough of this potent spice to last you for years of Indian cooking! ONLY use a pinch or two, it will easily overwhelm the dish with its funky garlic smell and taste if you aren’t careful! You also need unsweetened dried coconut shreds for this recipe – this is my preferred brand. Another VERY unusual spice needed for the masala is dagad phool, or dried stone flower. You can buy a top-quality version here.

My Citizens, this Maharashtrian delicacy makes for a delicious and spicy shrimp curry that has not just heat but true flavor complexity as well – I have every confidence it will become a dish most favored by your family and friends alike! Consider a cooling dish of Indian rice pudding as a dessert!