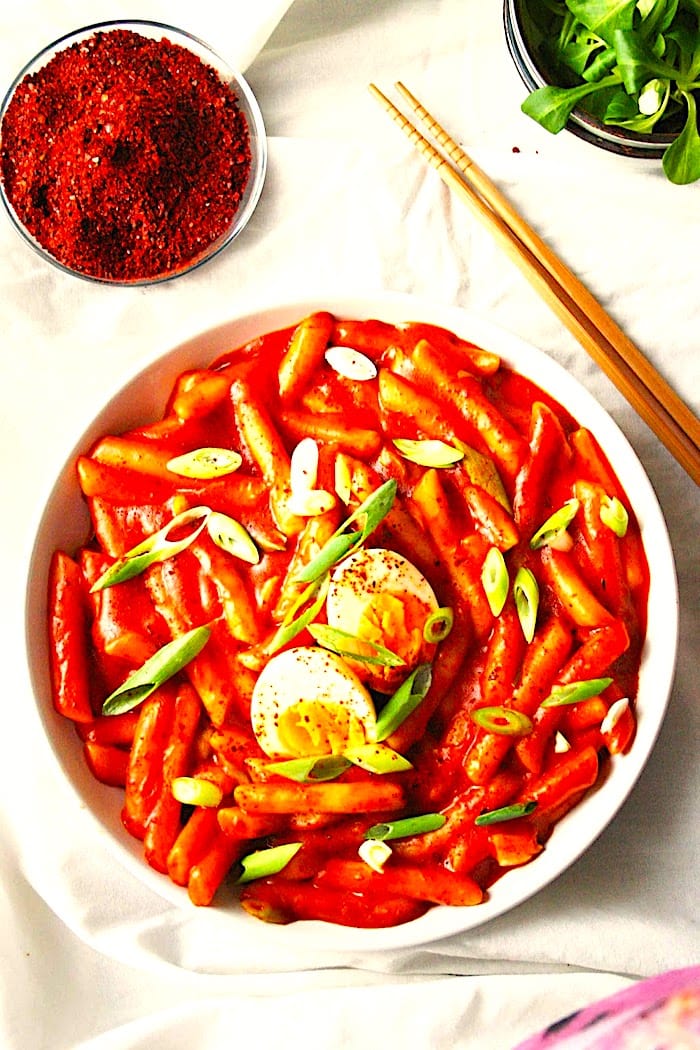 Citizens, the last time your prodigal Potentate – the wandering wastrel of wantonness who alone is TFD! – had the privilege of visiting the unmatched city of Seoul, it was under circumstances that involved much after-work drinking and the devouring of street food!

It was in fact during one of these near-amnesiac stumblings that I first sampled the glory that are Korean rice cakes stewed in spicy sauce – tteok-bokki! What’s not to love about this – it’s chewy rice sticks, bathed in a sublime spicy and sweet sauce, sometimes served with hard-boiled egg. It’s delicious and I will teach you to make a proper version of this today! 🙂

Eomuk (fish cakes), boiled eggs, and scallions are some of the most commonly-added ingredients. It can be seasoned with either spicy gochujang (chili paste) or non-spicy ganjang (soy sauce)-based sauce; the former being the most typical form, while the latter is less common and sometimes called gungjung-tteok-bokki (royal court tteok-bokki).

The first record of the dish appears in Siuijeonseo, a 19th century cookbook, where the dish was listed using the archaic spelling steokbokgi (복기). According to the book, tteok-bokki was known by various names including tteokjjim (steamed rice cakes), tteok-japchae (stir-fried rice cakes), and tteok-jeongol (rice cakes hot pot).

The royal court version was made from white tteok (rice cakes), sirloin, sesame oil, soy sauce, scallions, rock tripe, pine nuts, and toasted and ground sesame seeds, while the savory, soy sauce-based version was made in the head house of the Papyeong Yun clan, where good-quality soy sauce was brewed.

In this version, short ribs among others was a common ingredient. The name tteok-bokki also appears in the revised and enlarged edition of Joseon Yori Jebeop, where it is described as a soy sauce-based savory dish.

It is believed that red, spicy tteok-bokki with gochujang-based sauce first appeared in the 1950s. When Ma Bok Lim participated at the opening of a Chinese restaurant, she dropped tteok into hot sauce accidentally and ate it, and found that it was delicious.

After that, she started to sell it at Sindang and it became tteok-bokki these days. Today, the typical tteok-bokki purchased and eaten at bunsikjip(snack bars) and pojangmacha (street stalls) are red and spicy, while the soy sauce-based, non-spicy version is referred to as gungjung-tteok-bokki (궁중떡볶이; “royal court tteok-bokki”).

Rice tteok gained in popularity as the South Korean economy developed, and various versions of the dish have proliferated there and around the world.

Now, being the lover of all proteins that I am, I always use boiled egg in my tteok-bokki, and a few unorthodox additions. Rather than using the light corn syrup used to sweeten the original recipe, I strongly prefer the use of oligodang – what is this, you may well ask? I’m so glad you did! 😀

Fructo-oligosaccharides are also used as prebiotics. Don’t confuse prebiotics with probiotics, which are live organisms, like lactobacillus, bifidobacteria, and saccharomyces, and are good for your health. Prebiotics act as food for these probiotic organisms. People sometimes take probiotics with prebiotics by mouth to increase the number of probiotics in their intestine.

Oligodang (올리고당), which is oligosaccharide is a sweet syrup that is lower in calories and also contains a helpful bacteria called bifidobacteria that assists with digestion – so yes, this is both a prebiotic AND a probiotic in one. The only problem is that the bifidobacteria is destroyed on high heat so oligodang is only appropriate for dishes that do not involve high heat. I add it in at the end of the cooking for this reason.

I also like a bit of tang to my tteok, so I have added in some healthful and rare 3-year aged Korean mugwort vinegar – feel free to leave it out if you prefer, but I love it. Buy some here.

Citizens, this is spicy street food at its finest – sally forth, and unleash this Korean delight upon the palates of you and your guests forthwith! It’s especially good with Korean pajeon.