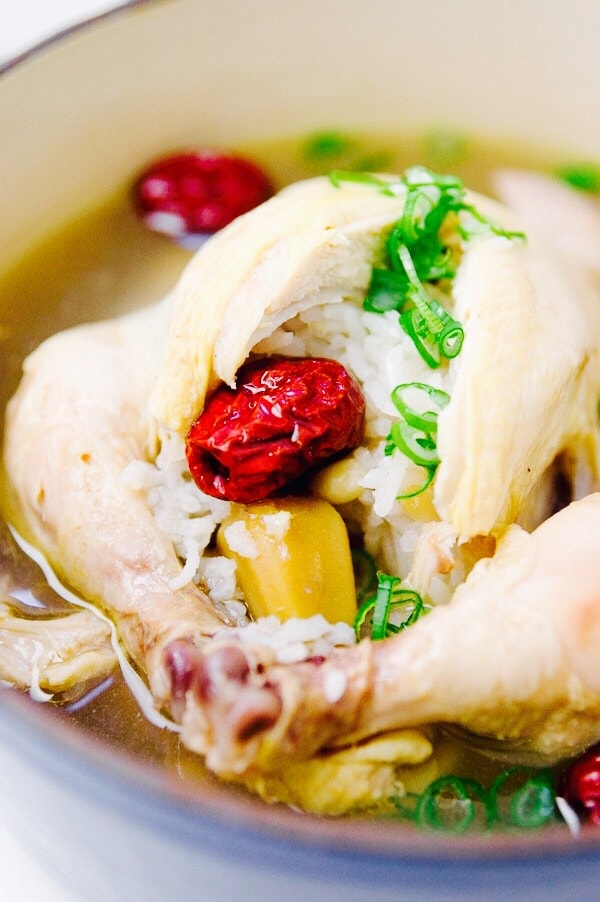 Samgyetang is a hot soup for hot summer days. It is especially popular to eat this chicken soup on sambok (삼복) days, which are three distinct days of the lunar calendar — Chobok (초복), Jungbok (중복), and Malbok (말복) – which are commonly among the hottest and most sultry days in Korea. It is believed to eat the soup three times in this period is good for your health.

Some specialty restaurants in South Korea serve nothing but samgyetang, having gained local popularity through their special recipes for the dish, which are often kept as secrets. The dish is usually accompanied by side dishes and, in some restaurants, a small complimentary bottle of insamju (ginseng wine).

The following recipe is a richer, healthier, and more flavorful version of the traditional Korean chicken ginseng soup. The cooking method for this samgyetang differs dramatically from others in that a crock pot is used.

The crockpot allows the herbs to soak and cook at a lower temperature, which preserves the goodness of the ginseng, gingko, and jujubes, rather than a quick, furious boil, which destroys the nutrients and doesn’t provide time for the herbs to permeate the broth. The crockpot also allows for long cooking time without long watching time.

Citizens, this is a very special recipe and I hope you enjoy it! 🙂