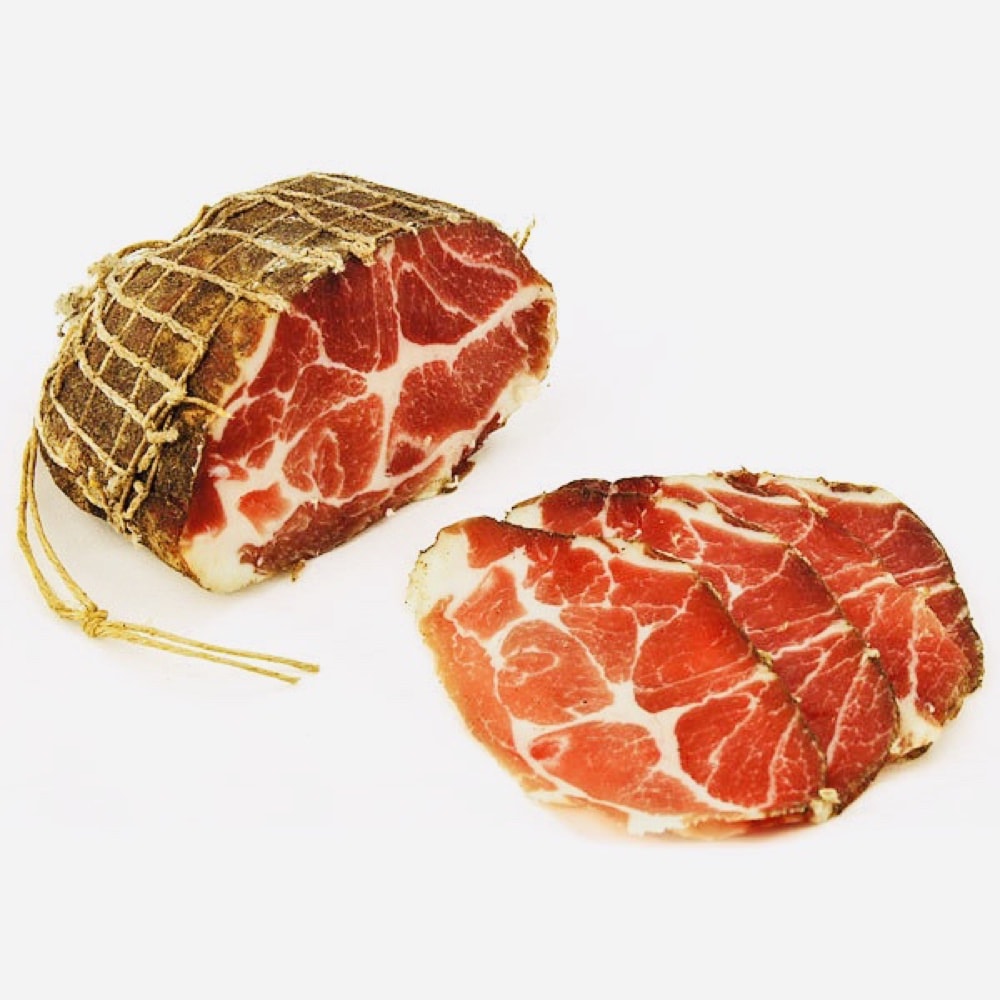 Citizens, there are few things that bring a greater feeling of satisfaction than making something you previously thought was impossible at home – and I, as the infinitely magnanimous TFD – seek your eternal happiness in all things gustatory!

As such, today I wish to share you with the proper techniques to make homemade Italian charcuterie – specifically, the porcine delight known as coppa (and sometimes, capicola)!

I strongly encourage you to join the Facebook group called ‘the Salt-Cured Pig’ if you have any interest in making your own charcuterie – the people there are pros and love to teach newcomers! My coppa recipe is in fact a synthesis of several versions I found there, plus a few bits of my own magic!

Capocollo, coppa or capicola is a traditional Italian and Corsican pork cold cut (salume) made from the dry-cured muscle running from the neck to the fourth or fifth rib of the pork shoulder or neck.

It is a whole-muscle salume, dry cured, and typically sliced very thin. It is similar to the more widely known cured ham or prosciutto, because they are both pork-derived cold-cuts used in similar dishes. However, it is not brined as ham typically is.

As noted on one of my favorite sites on this topic, blog.sausagemaker.com:

What’s the Difference Between Coppa and Capicola?

Coppa and capicola are two terms for the same kind of dry-cured meat. They can pretty much be used interchangeably, with one small caveat: Coppa originated in a region of Italy called Emilia-Romagna, while capicola was developed in Calabria.

Either way, the meat comes from a muscle in the hog’s neck and gets dry-cured, then sliced thin for eating. You might also hear this cut referred to as capocollo (the most direct combination of the words capo and collo, which mean head and neck in Italian), capicollo, or even gabagool.

The Calabrian version is spicy from liberal use of their eye-watering hot chilies, while the Emilia-Romagna version is mild. The Tuscan version uses game-related herbs and spices in their version made from wild boar – I have happily and heretically adopted ingredients from all 3 styles in my version!

This cut is typically called capocollo or coppa in much of Italy and Corsica. This name is a compound of the words capo (“head”) and collo (“neck”). Regional terms include capicollo (Campania and Calabria) and capicollu (Corsica).

Outside of Italy and Corsica, terms include bondiola or bondiola curada in Argentina and capicola or capicolla in North America. The pronunciation “gabagool” has been used by Italian Americans in the New York City area and elsewhere in the Northeast, based on the pronunciation of “capicola” in working-class dialects of 19th- and early 20th-century Neapolitan. It was notably used in the television series The Sopranos, and its use has become a well-known humorous stereotype.

In its production, capocollo is first lightly seasoned often with red and sometimes white wine, garlic, and a variety of herbs and spices that differs depending on region.

The meat is then salted (and was traditionally massaged) and stuffed into a natural casing, and hung for up to six months to cure. Sometimes the exterior is rubbed with hot paprika before being hung and cured.

Capocollo is essentially the pork counterpart of the air-dried, cured beef bresaola. It is widely available wherever significant Italian communities occur, due to commercially produced varieties. The slow-roasted Piedmontese version is called coppa cotta.

Capocollo is esteemed for its delicate flavor and tender, fatty texture, and is often more expensive than most other salumi. In many countries, it is often sold as a gourmet food item. It is usually sliced thin for use in antipasto or sandwiches such as muffulettas, Italian grinders and subs, and panini’ as well as some traditional Italian pizza.

A balanced quantity of white fat is important for flavor and softness.

Two particular varieties, Coppa Piacentina and Capocollo di Calabria, have Protected Designation of Origin status under the Common Agricultural Policy of European Union law, which ensures that only products genuinely originating in those regions are allowed in commerce as such.

Now, to make this item at home isn’t as God-awful difficult as other types of pork charcuterie, but you do need certain things or it just won’t work. Just like with my lardo recipe.

First off, you will need a cool and damp basement or room to hang the meat while it cures and it must be kept at the proper temperature and humidity throughout the process. You can buy a good humidifier here and a hygrometer to properly measure humidity here. Without the proper humidity, the wrong kinds of mold will grow on the meat and ruin it.

Most Italian charcuterie (and most charcuterie in general) have a layer of beneficial white mold on the outside that not only protects the meat, but flavors and preserves it as well. Typically, you would need to special order the correct kind of mold from a meat supply store – I will show you a far simpler method (and even more flavorful version) that you can more easily acquire.

I speak of koji – the same Japanese mold used to make soy sauce, miso and other umami delights! The beneficial effects of koji are amply demonstrated in my previous recipe about how to ‘dry age’ a steak with it – the recipe is here.

Now – as to the correct meat to use in coppa. Many recipes call for pork loin.

The proper cut is known as the collar, and you can purchase that cut made from Berkshire (aka Kurobota) heirloom pigs here.

Salt is of course integral to making proper charcuterie. You can use plain old kosher salt, but I prefer Trapani sea salt as used in Italy – you can buy it here. NEVER skimp on salt – EVER. It is the foundation of the curing process, which will take place in your fridge through a process known as equilibrium curing.

You also need to be sure you cure the meat to prevent botulism and to give the desired red color in the final product – Potassium Nitrate (aka Saltpeter) is the ingredient that works its magic in this recipe and be CERTAIN you only buy food-grade Nitrate – the proper version can be bought here.

You will also need to tie up the coppa to hang properly – this is not an easy thing to describe in writing, but this video here will teach you how to do it with ease!

Another important item you will need is an accurate kitchen scale – making charcuterie means you need to go by percentages of the weight of the meat you are curing, and being off even a little bit will ruin the product. This scale works well.

Collagen casing specific to making coppa may be purchased here. This casing helps protect the meat and is not edible – remove it before serving. It will be pierced many times with a ‘sausage pricker’ tool to help eliminate air bubbles and to allow tiny holes where the koji can enter the meat and help ferment it. Buy it here.

Koji can be purchased here on Amazon and sausage tie string can be bought here. Calabrian chili powder is here.

Have I intimidated you, Citizens? I hope not – yes, you need several specific tools and ingredients to make homemade charcuterie, but the incredibly savory and succulent end result is SO worth it. Just remember – if there is anything but white mold growing on the coppa, it’s probably bad and should be thrown away. If it smells weird, throw it away.

Begin your charcuterie journey with this single step, my Citizens!