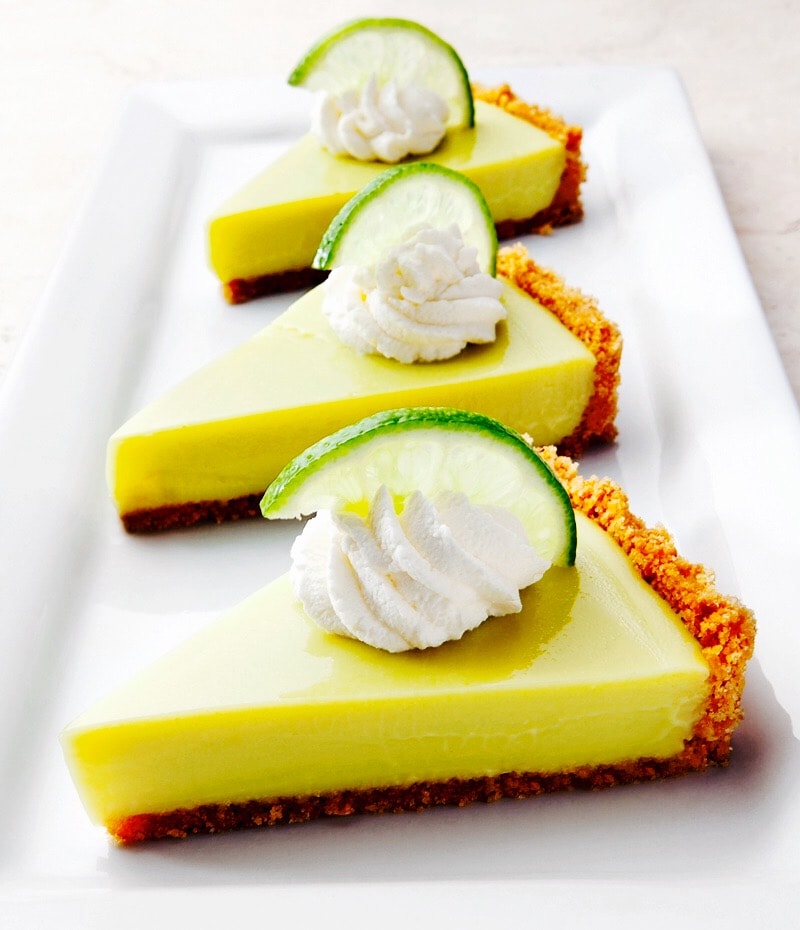 Citizens, Key lime pie is an American dessert straight from the Florida Keys made of Key lime juice, egg yolks, and sweetened condensed milk in a pie crust.

The dish is named after the small Key limes (Citrus aurantifolia ‘Swingle’) that are naturalized throughout the Florida Keys. While their thorns make them less tractable, and their thin, yellow rinds more perishable, Key limes are tarter and more aromatic than the common Persian limes seen year-round in U.S. grocery stores.

Key lime juice, unlike regular lime juice, is a pale yellow. The filling in Key lime pie is also yellow, largely because of the egg yolks.

During mixing, a reaction between the condensed milk and the acidic lime juice occurs that causes the filling to thicken on its own without requiring baking.

Many early recipes for Key lime pie did not require the cook to bake the pie, relying on this chemical reaction (called thickening) to produce the proper consistency of the filling.

Today, because consuming raw eggs can be dangerous, pies of this nature are usually baked for a short time. The baking also thickens the texture more than the reaction alone.

The Key lime pie has been traced back to the early 20th century in the Key West, Florida area and was invented by botanist Jack Simons.

Its exact origins are unknown, but the first formal mention of Key lime pie as a recipe may have been made by William Curry, a ship salvager and Key West’s first millionaire; his cook, “Aunt Sally”, made the pie for him.

If such is the case, however, it is also possible and maybe even probable that Sally adapted the recipe already created by local sponge fishermen.

Sponge fishermen spent many days on their boats, and stored their food on board, including nutritional basics such as canned milk (which would not spoil without refrigeration), limes and eggs.

Sponge fishermen at sea would presumably not have access to an oven, and, similarly, the original recipe for Key lime pie did not call for cooking the mixture of lime, milk, and eggs.

The pie is made with canned sweetened condensed milk. Fresh milk was not a common commodity in the Florida Keys before modern refrigerated distribution methods. Of course, you MUST use key limes ONLY in this recipe – if you can’t find them in your local grocer, you can buy the juice here.

You will note my recipe is not colored toxic green by food coloring – such a travesty has no place on this earth, Citizens! I’ve added a bit of vanilla and a whisper of optional cardamom to the whipped cream topping, but this is otherwise a most authentic recipe. For another delicious Florida citrus dessert, try sour orange pie!