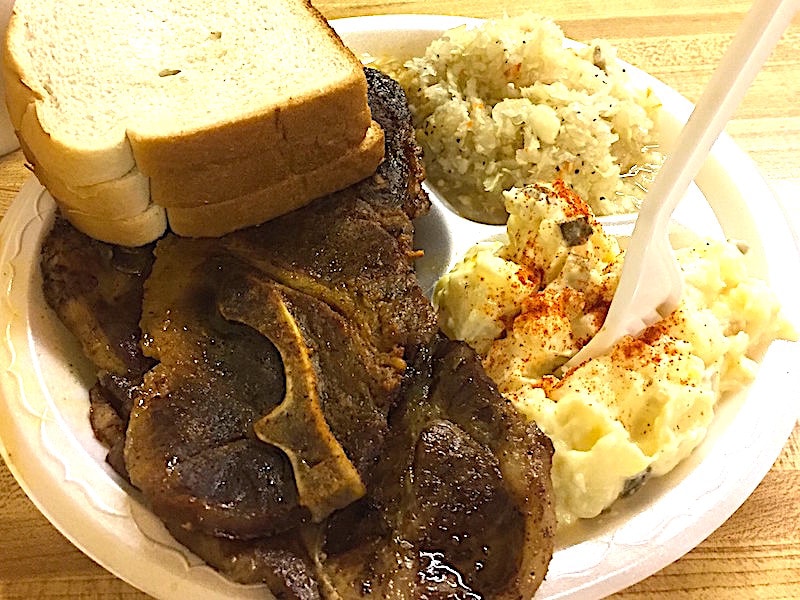 UPDATE on 9/29/20 – I was honored with Kentucky’s highest honor this month, an accolade given by the Governor of the Commonwealth himself! I speak of nothing less than being elected to receive the honorable title of Kentucky Colonel! Learn more about the award, its history and more here.

Citizens, your well-marinated and smoky Leader – the always slow-cooked TFD! – is an obsessive fan of all forms of BBQ! Even with my encyclopædic knowledge of ‘Q, I was totally unaware of a hyper-local, regional style of BBQ that had escaped even my eagle-eyed attention! This must not stand – and as such, allow me to introduce you to the spicy pleasures of Monroe County pork shoulder BBQ!

As eloquently noted in an article from southernliving.com:

My barbecue travels recently took me on a swing through Kentucky, including a late afternoon drive through Monroe County in the south-central part of the state, home to one of America’s most distinctive and largely-unheralded barbecue styles.

We’re not talking mutton and burgoo—the elements most commonly associated with Kentucky barbecue. Those are found further west. In Monroe County, pork and chicken are the name of the game, along with a few items you won’t find anywhere else.

There’s “vinegar slaw” for instance—called such to distinguish it from the white-dressed “mayo slaw.” People dress their slaw with vinegar all over the country, but not quite the way it’s done at places like R&S Barbecue in Tompkinsville. The cabbage is diced fine and marinated in a sugar-laced vinegar mix until it’s almost translucent, and it ends up supremely tangy, cool, and sweet.

But the real hallmark of the Monroe County style is shoulder—pork shoulder, to be precise, but locals omit the “pork” part as unnecessary. In the rest of the South, when barbecue fans say “pork shoulder” they mean whole picnics or Boston butts cooked low and slow over smoky heat and then pulled into long shreds or chopped into bits. Not in Monroe County. Here, “shoulder” means something very different.

They start with Boston butt that’s still frozen and use a meat saw to cut it into bone-in slices just a half inch thick. Once thawed, the slices are cooked on an open pit fired with hickory coals. Being so thin, they don’t need much time on the pit—45 minutes or less—but that’s plenty long enough to impart a subtle smoky flavor to the meat.

It’s served with “dip,” a thin, pungent sauce made from distilled vinegar with a little butter or lard (or both) and plenty of black and cayenne pepper. For me, that dip is the key. Without it, shoulder is really just a rather chewy slice of fire-singed pork, more akin to country ham than anything else. Let it steep for a while down in that tangy, pepper-laden sauce, though, and it’s an absolute delight.

Some doctrinaire barbecue fans might declare such a preparation to be grilling, not barbecue. I’ll let Western Kentucky University professor Wes Berry, author of The Kentucky Barbecue Book and authority on all things barbecue in the Bluegrass State, adjudicate that question. “So what?” Berry writes. “It still tastes like smoke and pork, and people around here love it. Ultimately it doesn’t matter what you call it—grilled pork steak, shoulder, or barbecue—because the stuff is good. Eat it.”

Speaking of the legendary Dr. Berry: he further expounded on his excellent blog:

Another noteworthy regional tradition—called Monroe County style—dominates barbecue menus in five south-central counties: Monroe, Barren, Cumberland, Allen, and Warren. This is the stuff I grew up eating. Locals refer to it as “shoulder.” Boston butts—the thick end of a pork shoulder—are frozen and then cut into thin slices, bone in, with a meat saw.

Pit masters traditionally burned down hickory wood to coals and shoveled the coals underneath iron grates that held dozens of slices of shoulder. As the meats cooked over hot coals, the pit tenders flipped and basted the pieces periodically with a “dip” of vinegar, lard, butter, cayenne and black pepper, and salt.

Because of the small surface area, pieces of shoulder soak up a lot of smoke in a short amount of time.

As lastly noted in the New York Times article that first caught my attention regarding this least-recognized BBQ style:

Shoulder steaks? Grilled? You won’t find the usual whole pork shoulders here, slow-smoked for half a day. There’s no chopping or shredding the meat to be doused with vinegar sauce, as they do elsewhere in Kentucky and the Carolinas. Monroe County barbecue consists of pork shoulder cut crosswise on a meat saw into pencil-thin steaks, which are grilled, rather than smoked, over hickory embers.

But these pork steaks don’t become barbecue until they are dipped — not once, but twice — in a fiery amalgam of vinegar, melted butter, lard, salt and tongue-torturing doses of black and cayenne peppers.

The first dip is swabbed on the meat as it grills with a miniature cotton mop. Once cooked, the steaks are plunged into a pot of dip, coating the surface with a peppery, buttery veneer. Customers with a masochistic bent order their pork steaks dipped a third time. If you really want to punish yourself, you ask for a separate cup of dip on the side.

The result may make you think of Buffalo wings, with grilled pork steaks standing in for deep-fried chicken. But Buffalo wings don’t taste of wood smoke. You may be reminded of jerky, as the thin slices of pork acquire a firm texture in the 30 minutes or so they spend over the embers.

Citizens, I have every confidence you will LOVE this most rare of BBQ recipes! 🙂 I’ve tweaked the recipe with 3 totally optional changes, as is my inalienable right as The Food Dictator! Don’t approve of my changes? I applaud your indefatigable orthodoxy, just ignore my tweaks to make the original version. I also include the proper recipe for this region of Kentucky’s preferred side dish with the shoulder chops – vinegar slaw!