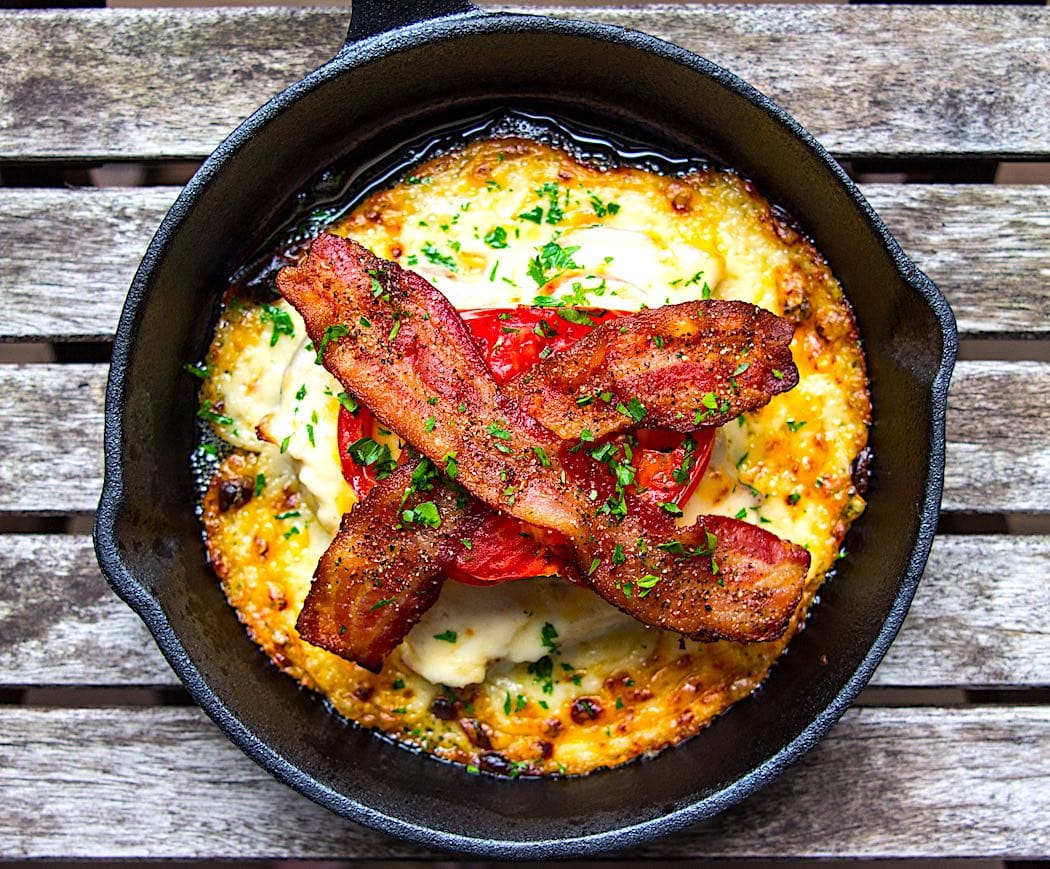 Citizens, there is no equivocation possible when it comes to the infinite joys the Monarch of Meats – YOUR TFD! – experiences when confronted by two of his favorite proteins in the same delicious sandwich! In this case, I speak of both bacon and turkey breast as exemplified in the ultimate sandwich combining these with cheese (sauce) – the justifiably renowned scion of Louisville Kentucky – the legendary Hot Brown sandwich! Mine is, of course, a more uptown version of the classic which is why I call my version ‘Umber’ – if you’re not familiar with the color, check this out. However, before we go into my version, let us expound upon the history of the original sandwich – for it is both glorious and fascinating.

A Hot Brown sandwich (sometimes known as a Louisville Hot Brown or Kentucky Hot Brown) is an American hot sandwich originally created at the Brown Hotel in Louisville, Kentucky, by Fred K. Schmidt in 1926. It is a variation of traditional Welsh rarebit and was one of two signature sandwiches created by chefs at the Brown Hotel shortly after its founding in 1923. It was created to serve as an alternative to ham and egg late-night suppers.

The Hot Brown is an open-faced sandwich of baked chicken or turkey breast and bacon, covered in creamy Mornay sauce and baked or broiled until the bread is crisp and the sauce begins to brown. Cheddar cheese or American cheese may be added for the sauce. Alternatives for garnishes include tomatoes, mushroom slices, and, very rarely, canned peaches. Some Hot Browns also include ham with the turkey, and either pimientos or tomatoes over the sauce, and imitation Hot Browns sometimes substitute a commercial cheese sauce instead of the Mornay.

When Fred K. Schmidt created the Hot Brown, its sliced roast turkey was a rarity, as turkey was usually reserved for holiday feasts. The original Hot Brown included the sliced turkey on an open-faced white toast sandwich, with Mornay sauce covering it, with a sprinkling of Parmesan cheese, completed by being oven-broiled until bubbly. Pimiento and bacon strips were then added to it. After its debut, it quickly became the choice of ninety-five percent of the customers to the Brown Hotel’s restaurant.

The dish is a local specialty and favorite of the Louisville area, and is popular throughout Kentucky. It was long unavailable at its point of origin, as the Brown Hotel was shut down from 1971 to 1985.

As noted on the website of the legendary Brown Hotel where it was first created:

With so much to boast about —award-winning dining; breathtaking turn-of-the-century architecture; attentive, caring service—some may wonder: “Why the Hot Brown?” Here is the history behind this now critically acclaimed dish.

In the 1920’s, The Brown Hotel drew over 1,200 guests each evening for its dinner dance. By the wee hours of the morning, guests would grow weary of dancing and make their way to the restaurant for a bite to eat. Sensing their desire for something more glamorous than traditional ham and eggs, Chef Fred Schmidt set out to create something new to tempt his guests’ palates. His unique dish? An open-faced turkey sandwich with bacon and a delicate Mornay sauce. The Hot Brown was born!

Available in our restaurants, bar and through in-room dining, the Hot Brown continues to exemplify our unending dedication to serving our guests. Such culinary prowess and commitment, of course, doesn’t go unnoticed. The Hot Brown—a Louisville tradition with worldwide appeal—has been featured in Southern Living, The Los Angeles Times, NBC’s Today Show, ABC News with Diane Sawyer, Travel Channel’s Man v. Food, and The Wall Street Journal, and is a regular entry in many of the world’s finest cookbooks.

As further elucidated on eater.com:

The hot brown sandwich has been a part of the American culinary landscape since 1926 (four years before the cheesesteak was invented in Philadelphia), and remains popular nearly a century later. But like many historical dishes, the recipe — and the story about its creation — has evolved over time.

“A lot of it is legend,” says Salmon, the hotel’s human resources director and unofficial keeper of the dish’s oral history. “No one wrote anything down. No one in 1926 thought we’d [still] be talking about this in 2018.”

According to Albert W.A. Schmid (no relation to Schmidt the chef), author of The Hot Brown: Louisville’s Legendary Open-Faced Sandwich, the dish was likely created on a cold night: “Something warm to eat on a frigid winter night during a break from dancing on the rooftop at the Brown Hotel,” he wrote. Historical record shows that chef Schmidt also created a cold brown, which was served at the hotel in the warmer months: The sandwich was still open-faced but was made with rye bread, turkey or chicken, lettuce, hard-boiled egg, and Thousand Island dressing. Ultimately it was only the hot brown that would catch on.

The hot brown may also have traveled down the Ohio River to the Mississippi River, all the way to St. Louis, where a similar sandwich was created at roughly the same time by chef Eduard Voegeli at the Mayfair Hotel. Called the prosperity sandwich, it was an open-faced sandwich with turkey, ham, bacon, and cheese sauce. “At that time the riverways would have been how to travel,” Schmid wrote, noting that yet another similar sandwich, the turkey devonshire, was created upriver at the Stratford Club in Pittsburgh in 1934. The Courier-Journal reported in 1985 that the first newspaper records of the sandwich date to the 1940s, with the paper’s food editor printing her own recipe for the dish in 1949.

Citizens, ! First, I call for only the finest bacon money can buy and that is Benton’s bacon, which you can buy here. I also prefer not to cook the bacon too crisp, but that is my personal affectation – the original recipe does call for crisp bacon. Either way, Benton’s will make this sandwich truly special!

Second, the bread MUST be Texas Toast – nothing else will do! Third, in the spirit of the original recipe, I call not for pimientos, but for minced peppadew peppers which are both sweet and spicy – you can buy them here. Next, instead of garnishing with parsley and paprika, I prefer to use minced chervil (the tarragon-like notes work very well in this sandwich, IMHO) and smoked paprika. Lastly, I take a cue from the Brown Hotel’s use of Romano-based mornay sauce but instead use my version of the classic recipe, which is immodestly better than the Brown Hotel’s.

Lastly and perhaps most importantly – the turkey breast. It should be high-quality, not too expensive but with the right kind of brining to make it juicy and delicious. My preferred turkey breast is the kosher version sold at Trader Joe’s, which hits all of these criteria and since it is salted in the koshering process, it is already brined and ready to go!

The Hot (Umber) Brown is a delicious and hearty sandwich that is perfect for the end of Winter – I hope you enjoy it as much as I do, , you won’t be disappointed! You might enjoy this in tandem with the other classic recipe of the city, Benedictine spread.

Do NOT follow this link or you will be banned from the site! Click here to see our Privacy Policies, Citizen!
96shares
wpDiscuz
0
0
Would love your thoughts, please comment.x
()
x
| Reply