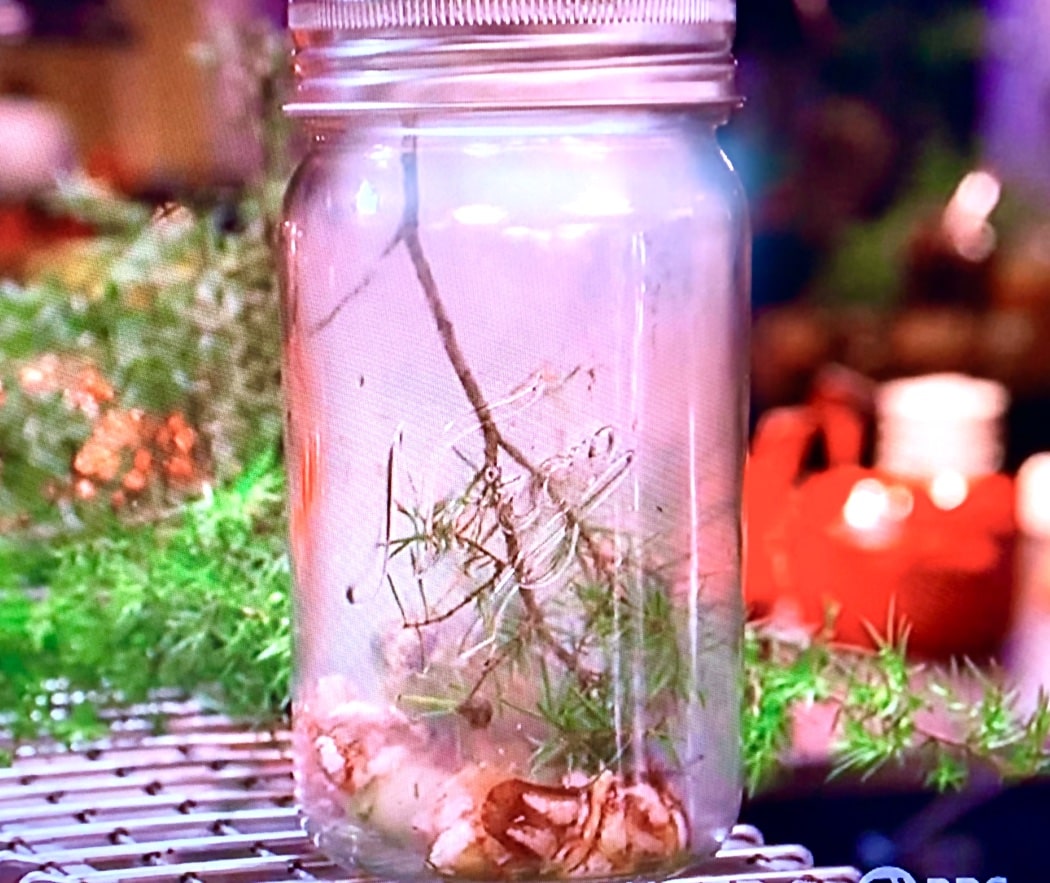 Citizens, I had planned to move forward with a Turkish recipe incorporating Musk (the perfume, not the billionaire) today as part of our week of recipes using rare perfume ingredients. However, I shall instead bump that to the post AFTER this one, as the inspiration for this recipe hit serendipitously as I was watching TV yesterday!

From the comfort of my royal divan, I discovered a recipe for Juniper-smoked lobster on one of my favorite shows, ‘New Scandinavian Cooking’ and decided I could modify it to be even more delicious! Plus, it does indeed fit perfectly in this week’s theme! 🙂 A juniper berry is the female seed cone produced by the various species of junipers. It is not a true berry but a cone with unusually fleshy and merged scales, which gives it a berry-like appearance.

The cones from a handful of species, especially Juniperus communis, are used as a spice, particularly in European cuisine, and also give gin its distinctive flavor. Juniper berries may be the only spice derived from conifers. The flavor profile of young, green berries is dominated by pinene; as they mature this piney, resinous backdrop is joined by what Harold McGee describes as “green-fresh” and citrus notes.

The outer scales of the berries are relatively flavorless, so the berries are almost always at least lightly crushed before being used as a spice. They are used both fresh and dried, but their flavor and odor are at their strongest immediately after harvest and decline during drying and storage.

Juniper berries are used in northern European and particularly Scandinavian cuisine to “impart a sharp, clear flavor” to meat dishes, especially wild birds (including thrush, blackbird, and woodcock) and game meats (including boar and venison). They also season pork, cabbage, and sauerkraut dishes. Traditional recipes for choucroute garnie, an Alsatian dish of sauerkraut and meats, universally include these berries.

Besides Norwegian and Swedish dishes, juniper berries are also sometimes used in German, Austrian, Czech, Polish and Hungarian cuisine, often with roasts (such as German sauerbraten). Northern Italian cuisine, especially that of the South Tyrol, also incorporates the ingredient.

Think: ‘gin’. Because – as with that spirit – the juniper berry adds a bracing, exhilarating touch to fragrances. (When you smell gin, you’re basically smelling juniper, actually.) It has a touch of pine to it: a bit sappy, a touch bitter, but definitely fresh – and powerful, so it’s generally used in small doses.

The berries are harvested from a small, shrub-like tree which belongs to the cypress family. It’s a harvest for patient souls: juniper berries (which can be blue, red-brown or orange) take three years to ripen, and are steam-distilled to release their pungency.

Aromatherapeutically, juniper is used for arthritis, sore muscles, poor circulation and (when sniffed) as a ‘pick-me-up’ – and as a perfume ingredient, it certainly revs up a composition. Thanks to its aromatic edge, you’re most likely to be intoxicated by it in ‘shared’ (or masculine) creations. Perfumer Christine Nagel – now working in-house for the Hermès brand – explains that juniper brings ‘freshness and sharpness’ to a creation…

Chef Niklas owns three top restaurants in Sweden and hosted the popular cooking series MAT (“food” in Swedish), as well as other culinary programs in his home country. His juniper-smoked lobster really inspired me, but I heavily tweaked his recipe and have made it my own! 🙂 You’ll need some Icelandic Birch-smoked salt for this recipe – please note that I don’t call for quantities in this recipe, as I think portion size is up to the Chef and how/when you serve this in your dinner.

I hope you enjoy this scent of the Nordic region in my recipe and watch for more perfumed recipes to come shortly! You might want to pair this with another Scandinavian recipe from the show – Svalbard beet soup with goose stock!