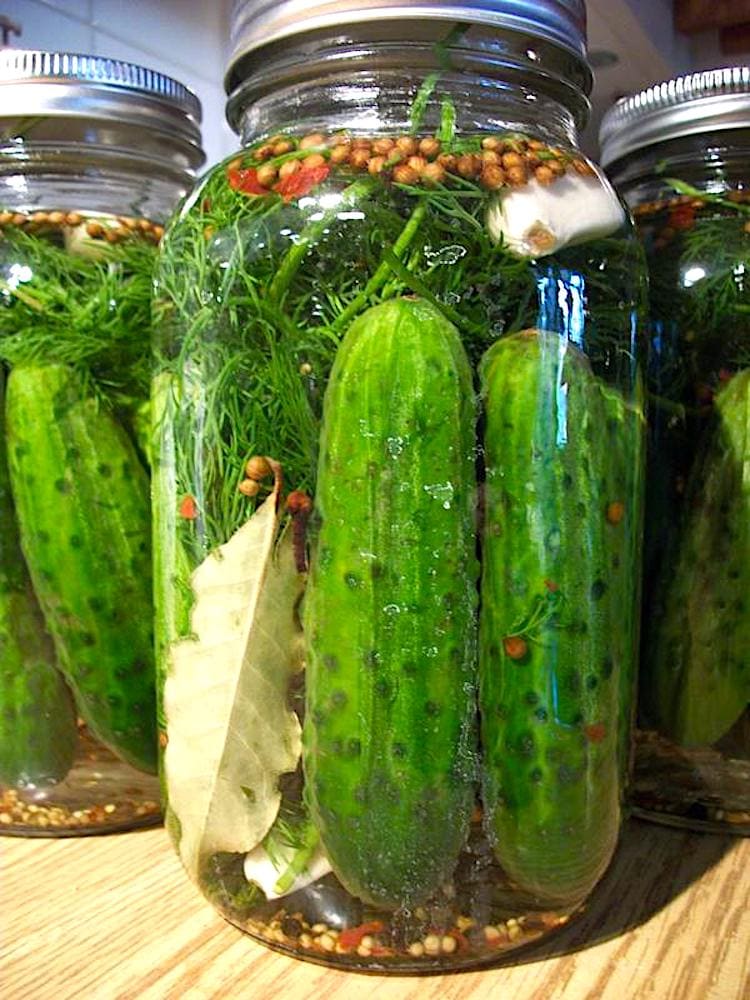 Citizens! The love that the Deity of Deli, the Hetman of Half-Sour – YOUR TFD ! – has for old-school Jewish cuisine is both limpidly pure and and numinous in its spiritual nature!

Growing up in Brooklyn during the 70’s, I was privileged to experience the height of deli culture and few things put a bigger smile on my face than snacking on the complimentary pickles at every table!

Whilst I personally prefer the full sour pickle, many (my beloved wife included) are firmly in the half-sour camp and today I wish to share its more subtle joys with all of you!

I originally thought I’d never share my pickling recipes and techniques – this is the only TRULY authentic Jewish half-sour pickle recipe on the Internet. The rest are pretenders.

Allow me to first quote extensively from a fantastic article I found on pbs.org about pickling in general and half-sours in particular (and if you’re not supporting your local PBS station – for SHAME!):

It is rumored that they were one of Cleopatra’s prized beauty secrets. They make appearances in the Bible and in Shakespeare’s writing.

Pregnant women have been known to crave them along with ice cream. Pickles have been around for thousands of years, dating as far back as 2030 BC when cucumbers from their native India were pickled in the Tigris Valley.

Throughout history pickling was a necessity, as it was the best way to preserve food for a long period of time. As one of the earliest mobile foods, pickles filled the stomachs of hungry sailors and travelers, while also providing families with a source of food during the cold winter months.

Pickles are created by immersing fresh fruits or vegetables in an acidic liquid or saltwater brine until they are no longer considered raw or vulnerable to spoilage.

When we think of pickles, cucumbers commonly come to mind. Pickled cucumbers are often lacto-fermented in saltwater brine. During this process lactic microbial organisms develop, which turn the naturally occurring sugars of foods into lactic acid.

In turn, the environment becomes acidic quickly, making it impossible for any spoiling bacteria to multiply. Cucumber pickles can also be made with a salt and vinegar brine, a popular choice for home cooks. The brine, known as “pickle juice,” is sometimes used by athletes to treat dehydration, though it has yet to be proven as a true remedy.

Kosher dills have a unique history of their own. In The Book of Jewish Food, Claudia Roden explains that pickled vegetables were a dietary staple for Jews living in the Ukraine, Poland, Lithuania and Russia. The sharp flavor of pickles proved a welcome addition to the bland bread-and-potato diet of these cold weather countries.

For several generations, it was an autumn custom for Ashkenazim to fill barrels with cucumbers, beets and shredded cabbage. The mixture was left to ferment in a warm place for several weeks, then relocated to cool, dark cellars. The pickles would last through the long cold winter until spring, when new crops of fresh produce were available.

When a heavy influx of eastern European Jews arrived in New York City during the late 1800s and early 1900s, immigrants introduced kosher dill pickles to America. Cucumbers were washed, then piled in large wooden barrels along with dill, garlic, spices, kosher salt and clean water. They were left to ferment for a few weeks to several months; shorter fermenting time produced brighter green “half sours,” while longer fermentation resulted in “full sours.”

Pickles were sold on pushcarts in the immigrant tenement district of New York City. Over time, Jewish-owned shops selling pickles straight out of the barrel began appearing in droves. Eventually, pickling became a profitable business within the Jewish community. Today, a plate of pickles is usually served complimentary with a meal at the best Jewish delis.

Home pickling was made much easier and more sanitary during the 1850s, when two essential canning tools were invented. First, a Scottish chemist by the name of James Young created paraffin wax, which helped to create a seal for food preserved in jars. A few years later, John Mason developed and patented the first Mason jar. Mason’s jars were made from a heavyweight glass that was able to tolerate the high temperatures used in canning and processing pickles.

It’s ALWAYS preferable to use salt (the ancient Jewish shtetl way) instead of vinegar for any form of pickling, as vinegar will brown the pickle faster as well as souring it more quickly – issues that are especially relevant for making half-sours. So, of course, this is the time-hallowed way we shall make our authentic half-sours pickles today!

First off, if you are going to be making pickles in quantity and with any frequency, you REALLY want a ceramic pickling crock – this lead-free pottery crock solution is my go-to.

Low-salt pickles, known as ‘half-sours’ in deli speak, are made with a roughly 3.5% salt solution, which is the salinity of seawater. My preferred brand of pickling salt is this one. Half sours have a shorter shelf life than the full sours, so try and eat all of them within 2-3 weeks, max.

My seemingly eccentric use of tea appears on the surface to be totally bizarre, but it serves a secret purpose! The tea will not flavor the pickles at all, but it DOES contribute some most necessary tannic acid, which helps to keep the pickles crunchy! Alternatively and for full authenticity, you can use 3 or 4 cherry or oak leaves or 2 fresh grape leaves.

Unwaxed Kirby cucumbers are the only type that will work for pickling, so be sure to use these – farmers markets are your best bet.

My optional use of the heel of a sour rye bread with caraway seeds is an old-school pickle merchant trick, rarely shared – it provides a kickstart for the right yeasts and bacteria that will result in a mildly fermented brine, similar to the Russian Kvass, and will give a subtle, mildly fermented flavor to the pickles if used.

In making these pickles, it is important that you NOT use store-bought mixed pickling spices, because the cinnamon, cloves, and other sweetly aromatic spices in them will detract from the true, clean flavor of these pickles. Unlike my full sour pickles, this does use a close-to-standard pickling blend of my own design.

Also, it is important that you NOT use iodized salt in the process, as that will leave a bitter aftertaste. Especially in half-sour pickles, it is most noticeable!

I hope you will give these delicious and authentic half-sour pickles a try, Citizens – preferably paired with the unmitigated joy of a corned beef sandwich, if you roll that way! 😀